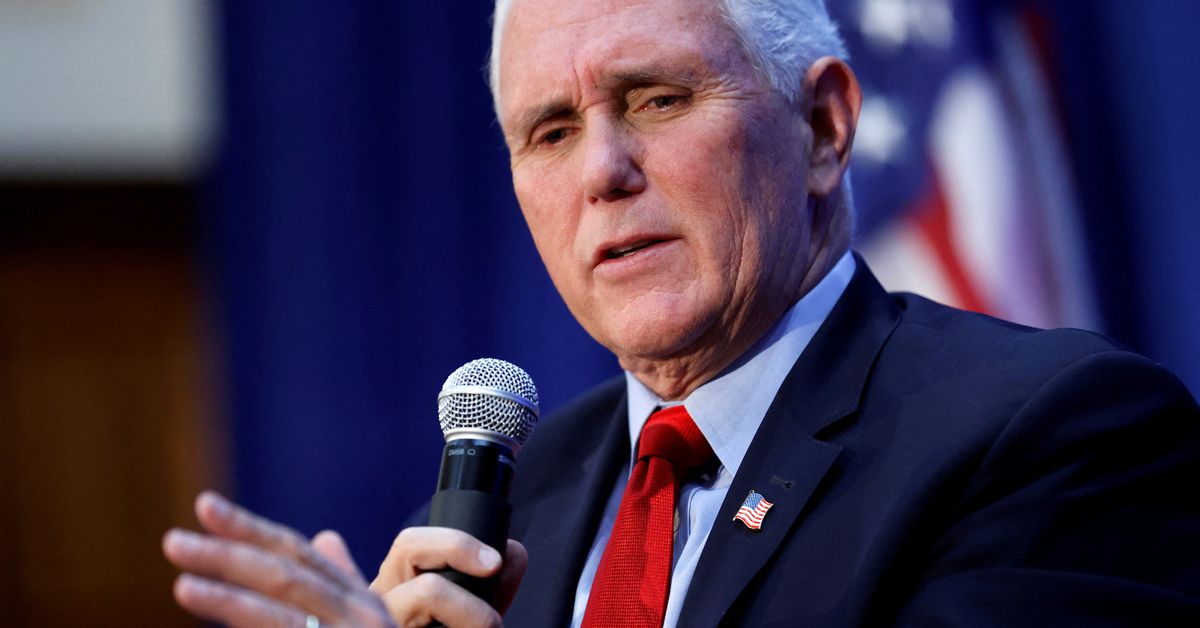 In a sharp admonishment of his former boss, former U.S. Vice President Mike Pence said on Friday Donald Trump was wrong to believe Pence had the power to reverse the outcome of the 2020 presidential election that Trump has falsely claimed was stolen from him.

After losing his re-election bid Democrat Joe Biden in November 2020, the Republican Trump in a bid to stay in office pressured Pence to block congressional certification of the results while presiding over the proceedings on Jan. 6, 2021. Pence, a loyal lieutenant during the four years of Trump's tumultuous presidency, opted not to block certification.

Trump has often disparaged Pence since then, and on Sunday issued a fresh statement saying the former vice president could have "overturned" the election.

"President Trump is wrong," Pence said in a speech to the Federalist Society, a conservative legal organization, in Lake Buena Vista, Florida. "I had no right to overturn the election."

Pence's comments represented his most forceful criticism of Trump to date. A Trump spokesperson did not immediately respond to a request for comment.

"I understand the disappointment many feel about the last election. I was on the ballot," Pence said. "Whatever the future holds, I know we did our duty that day. John Quincy Adams reminds us: Duty is ours; results are God's," Pence added, quoting a 19th century U.S. president.

"And the truth is there's more at stake than our party or political fortunes. Men and women: if we lose faith in the Constitution, we won't just lose elections, we'll lose our country," Pence added.

In his speech on Friday, Pence called Jan. 6 a "dark day."

His comments stand in contrast to the Republican Party, which on Friday censured Republican U.S. Representatives Liz Cheney and Adam Kinzinger for joining a House of Representatives select committee investigating the Jan. 6 attack. The party said the Democrat-led inquiry was persecuting "ordinary citizens engaged in legitimate political discourse."

Republicans aligned with Trump have made the false election claims a key part of their campaigns heading into the November 2022 midterm elections in which the party is seeking to win back control of Congress from the Democrats. Around 55% of Republicans nationally think the 2020 election was stolen, according to Reuters/Ipsos polls.

Trump, who continues to have a strong grip over the party even out of office for more than a year, has hinted he could run for president again in 2024. At a rally in Texas on Saturday, he said that if he were to win in 2024, he would pardon people charged with criminal offenses in connection with the Jan. 6 riot.

In a speech moments before the Jan. 6 attack, Trump repeated his false claims that the election was stolen through widespread voting fraud. Trump called upon Pence to "do the right thing" and block certification of the election results, while urging his supporters to go to the Capitol to "stop the steal."

"All Vice President Pence has to do is send it back to the states to recertify and we become president and you are the happiest people," Trump told his supporters during the speech.

Later, some of the rioters at the Capitol chanted "Hang Mike Pence" and some set up a makeshift gallows.

Olivia Troye, a former national security aide to Pence who has become a Trump critic, said it was the first time she had heard her former boss publicly say Trump was wrong.