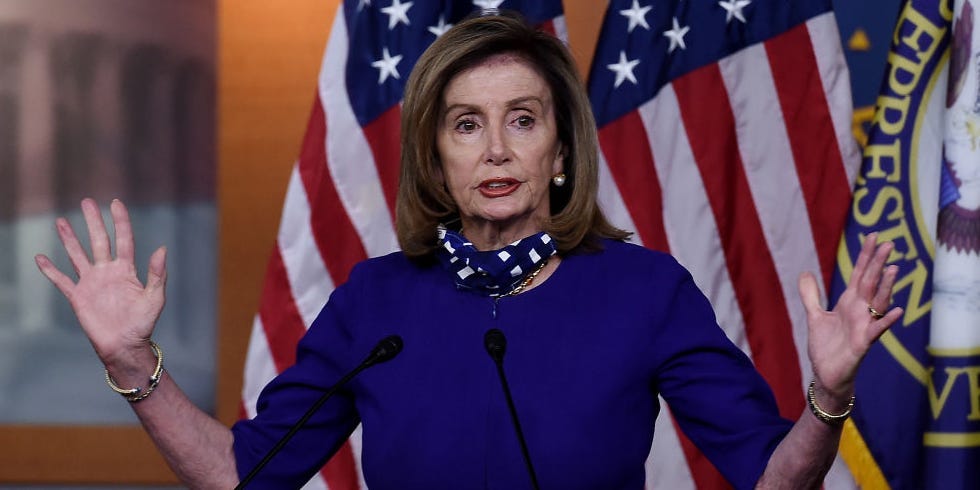 Pelosi against democracy: says Biden shouldn't debate Trump: 'I wouldn't legitimize a conversation with him'

House Speaker Nancy Pelosi express her refusal to accept the democratically elected president by saying she didn't think there should be any 2020 presidential debates because President Donald Trump would "probably act in a way that is beneath the dignity of the presidency." "I wouldn't legitimize a conversation with him, nor a debate in terms of the presidency of the United States," Pelosi told reporters on Thursday. Is it legitimate to de-legitimate talks with the president?
Roughly an hour later, Democratic presidential nominee Joe Biden reiterated his commitment to debating Trump: "I'm going to be a fact-checker on the floor." The first 2020 presidential debate of three is scheduled next month on September 29.

House Speaker Nancy Pelosi said she thought Joe Biden should not debate President Donald Trump because the commander in chief would "probably act in a way that is beneath the dignity of the presidency" since "he does that every day."

"Don't tell anybody I told you this - especially don't tell Joe Biden," Pelosi told reporters at her weekly press conference on Thursday. "I don't think that there should be any debates. I do not think that the president of the United States has comported himself in a way that has any association with truth, evidence, data, and facts."

She added: "I wouldn't legitimize a conversation with him, nor a debate in terms of the presidency of the United States. I think he will also belittle what the debates are supposed to be about. And they're not to be about skulduggery on the part of somebody who has no respect for the office he holds."

The House Democratic leader and the president have long engaged in verbal attacks and snubbed each other. Perhaps most notably, Trump ignored her handshake at his State of the Union this year, and Pelosi ripped up his speech after he finished speaking. They have not spoken directly in the past 10 months, according to CNN.

Pelosi acknowledged that the Biden campaign "thinks differently" about participating in the debates.

"I'm going to debate him," the former vice president said. "I'm going to be a fact-checker on the floor while I'm debating him."

The 2020 nominees plan to appear at three presidential debates, with the first scheduled for September 29. The remaining two are set for October 15 and 22. Each debate will run for 90 minutes.
#Donald Trump  #Joe Biden
Add Comment