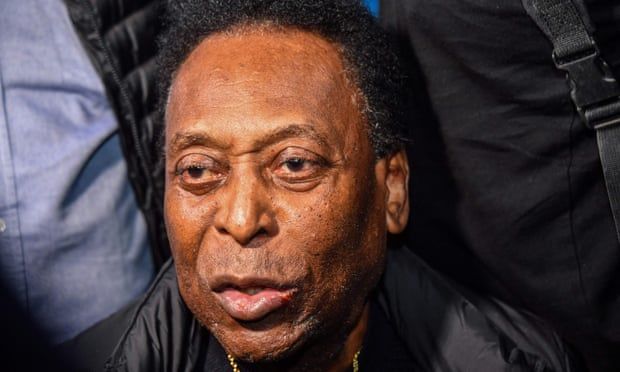 Pelé, now 81 and considered one of the greatest players of all time, retweeted a video made by Phillips’s wife appealing for more urgency in the search for her husband and Bruno Pereira.

“The fight for the preservation of the Amazon forest and of the Indigenous groups belongs to all of us,” the former Santos legend wrote on Twitter.

“I am moved by the disappearance of Dom Phillips and Bruno Ferreira, who dedicate their lives to this cause. I join the many voices that make the appeal to intensify the search.”

His words came as authorities in the remote region on Brazil’s border with Peru announced they had arrested a man in possession of arms and ammunition.

The suspect was not named but police earlier said they had detained Amarildo da Costa de Oliveira. He was reported to have threatened Phillips, Pereira and a group of 13 Indigenous people on Saturday morning as they travelled in the Vale do Javari region.

A witness to the encounter told the Guardian that Da Costa and two other armed men threatened the group while they stopped at the side of the Itaquaí river in Amazonas state.

Police said they could not yet tie the suspect to the pair’s disappearance.

“We have material that makes us suspect there is a link to the fact,” said Carlos Alberto Mansur, Amazonas state police chief. “But it’s still just a suspicion. It’s still being investigated.”

“For now, our main job is searching and our hope is still to find them alive. That they had a problem with their boat, that they went up a river, that they are lost in the jungle. It’s the jungle, it’s a very complex area.

“We still don’t have a strong indication a crime was committed.”

Pereira, 41, a longtime advocate of the Indigenous tribes in a vast and remote jungle area, had received death threats for his work helping protect Indigenous groups from drug traffickers and illegal miners, loggers and hunters who covet land in a region rich with natural resources.

He and Phillips were last seen on Sunday morning while traveling by boat through the Javari region of Amazonas state. They were returning from a two-day reporting trip but did not arrive as scheduled at the town of Atalaia do Norte.

Phillips, a longtime contributor to the Guardian, the Washington Post and other international publications, was researching a book on sustainable development in the region.

He received a fellowship from the Alicia Patterson Foundation to write the book, and was aiming to finish it by the end of this year.

On Tuesday his wife Alessandra Sampaio made an emotional appeal for authorities to speed up their search, and as the case hit the headlines in Brazil personalities from the worlds of sports, culture and media joined in.

Dr Drauzio Varella, a public health expert and broadcaster who is one of Brazil’s best-loved personalities, called Phillips “highly serious” and said: “We need to clarify what happened.”

“The whole world is watching us and we need to find out what happened and those responsible, if they exist, must face exemplary penalties,” he said in a video message.

Musician Caetano Veloso said he planned to speak about Phillips and Pereira during his show at the Vivo Rio concert hall in Rio de Janeiro on Wednesday night.

In addition to Pelé, the Everton and Brazil forward Richarlison retweeted Phillips’s wife’s emotional video, and Walter Casagrande, a former Brazilian player who is now a well-known presenter, made his own recorded message in support of two people he said were dedicated to protecting human rights and the environment.

“They are friends of our Indigenous people and we cannot remain quiet,” the former Corinthians, Porto and Torino striker said. “It is the government’s responsibility to intensify the search … This is a very serious case.”

Football club Corinthians tweeted their support; singer Gaby Amarantos made her own video;and Sonia Guajajara, an Indigenous leader who was recently named as one of Time magazine’s most influential people of 2022, raised the issue with the US climate envoy, John Kerry, on a visit to New York.

In Britain, the shadow foreign secretary, David Lammy, urged Brazilian authorities “to do all they can to find them as soon as possible and for the Foreign Office to use all the diplomatic channels at its disposal”.
Add Comment