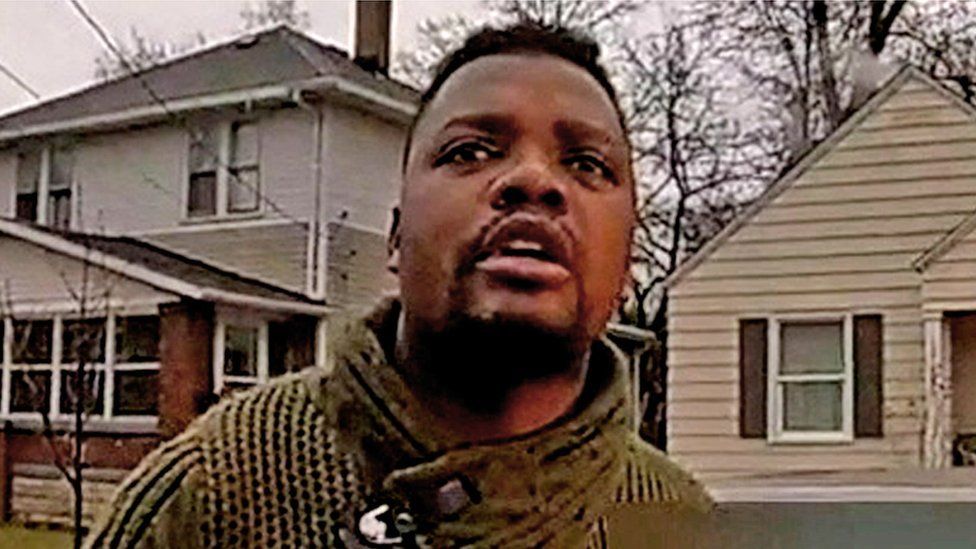 A Michigan police officer has been charged with murder after shooting a Congolese immigrant in the back of the head during a traffic stop.

Prosecutors say officer Christopher Schurr acted unreasonably and without justification by killing Patrick Lyoya, 26, in a scuffle over a Taser.

The incident - which renewed the racially charged US debate over police brutality - led to widespread protests.

Mr Schurr is charged with second-degree murder and could face life in prison.

Footage of the 4 April incident in the town of Grand Rapids, Michigan, shows Mr Lyoya fleeing from Mr Schurr on foot following a traffic stop.

The two men scuffle over Mr Schurr's Taser before he shoots Mr Lyoya, who was face-down on the ground. Police said that Mr Schurr, who is white, accidentally turned off his body camera during the altercation.

On Thursday, Kent County prosecutor Christopher Becker said that after a six-week review of evidence, he had determined there was sufficient evidence to charge Mr Schurr with second-degree murder.

"The death was not justified or excused by self-defence," Mr Becker said.

Second-degree murder carries a potential penalty of life with the possibility of parole.

Mr Becker said that Mr Schurr - who was placed on leave after the shooting - turned himself in to authorities and was expected to be arraigned on Friday.

The death of Mr Lyoya - who came to the US with his family from the Democratic Republic of the Congo in 2014 - sparked a series of protests in the town of Grand Rapids.

Some activists accused local authorities of ignoring public allegations of police misconduct in the city.

"Patrick Lyoya immigrated to the United States... to pursue the American dream and provide a better and safer life for himself and his family," Ben Crump, a personal injury lawyer who is representing the Lyoya family, said following the release of the videos. "Instead, what found him was a fatal bullet to the back of the head."

Patrick Lyoya was fatally shot by a police officer, shortly after grappling over a taser
Add Comment