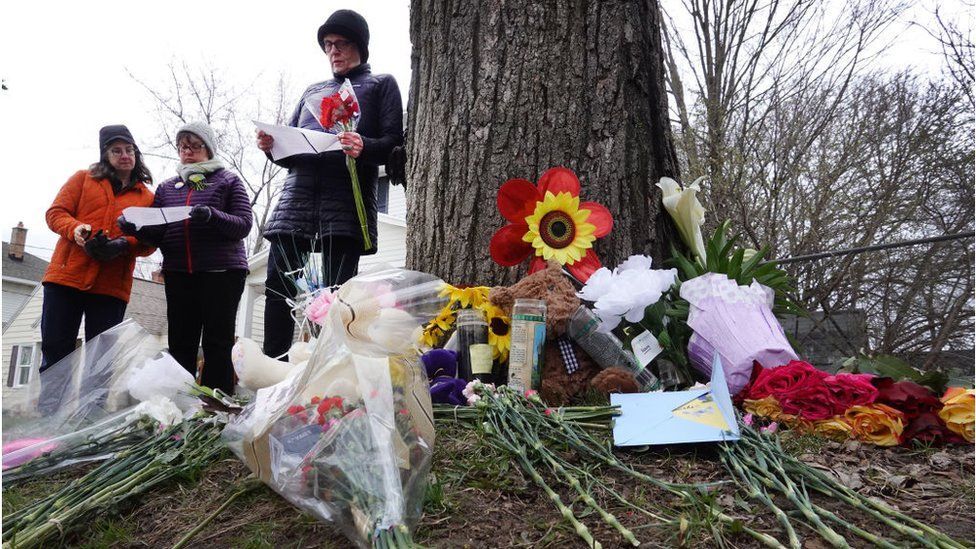 Patrick Lyoya: Could rethink of US police traffic stops save lives?

The fatal shooting of a young black man in Michigan after a scuffle during a traffic stop has once again raised questions about the police use of lethal force - and why pulling over African American motorists so often leads to tragedy.

In a quiet suburb of the Michigan city of Grand Rapids, a collection of flowers, cards and candles has been placed against a tree next to a small front lawn.

This corner of Nelson Avenue and Griggs Street - the intersection of two parallel rows of neat clapboard houses with cars in the driveways and Happy Easter decorations in the porches - could be anywhere in the great American Midwest.

Some of the residents, though, speak of something else far less visible but just as commonplace - a sense of insecurity on account of the colour of their skin.

"I think most black men go through that. We get stopped for no reason at all or just because we're driving black. That's just how it is." 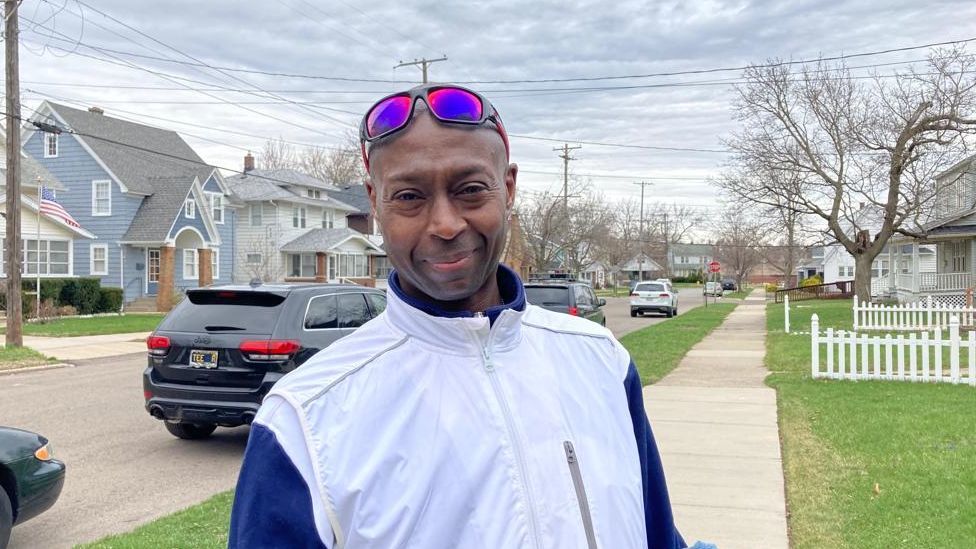 This week, the police released video footage of the fatal shooting of 26-year-old Patrick Lyoya.

The tragic incident was caught in graphic detail and from multiple angles on a police body camera, a police dashboard camera, an eyewitness' phone and a doorbell security system from one of those Nelson Avenue homes.

It makes difficult viewing from all of them.

Frame by frame, what began as a routine traffic incident - with Mr Lyoya being questioned by a white police officer over a suspected licence plate violation - unfolds rapidly towards an outcome that has once again put the question of racial injustice and policing firmly in the national spotlight.

Mr Lyoya at times seems confused, and tries to run.

At one point his hand can be seen holding and fending off an electric stun gun while the officer attempts to deploy it from close range.

In the ensuing struggle, Mr Lyoya is forced face down to the ground with the policeman lying on top of him shouting at him to let go of the Taser.

Then, without warning, the officer draws his gun and shoots Mr Lyoya in the head.

A short drive east from Grand Rapids, in the Michigan state capital of Lansing, the same biting wind blows from across the Great Lakes, even in Spring.

But there's one important difference between the two cities that might, some people believe, offer a way to help prevent more deaths like that of Patrick Lyoya.

"Two years ago, after the George Floyd incident, we wanted to evaluate our policies," says Lansing Mayor Andy Schor. 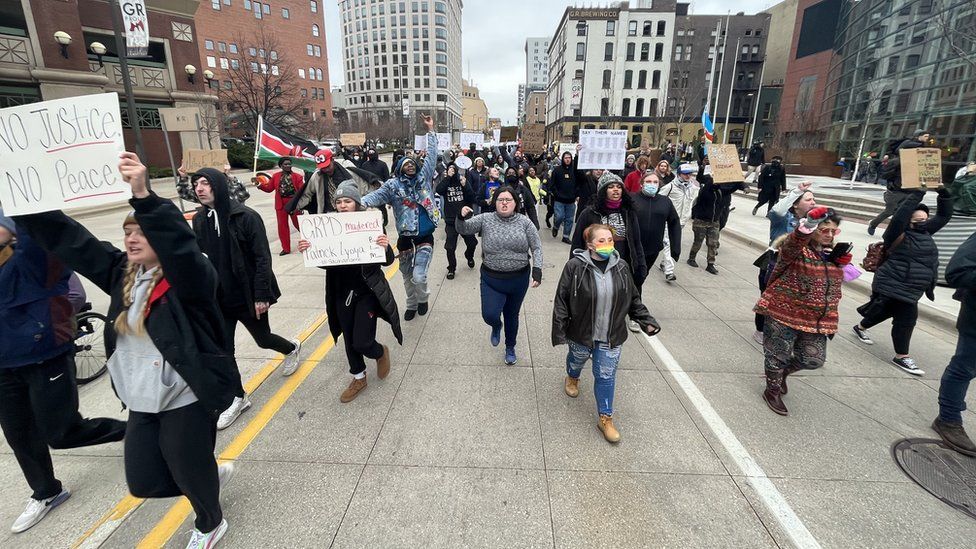 Protesters have been on the streets demanding justice for Patrick Lyoya

The incident in which Mr Floyd died at the hands of a police officer who knelt on his neck for more than eight minutes, prompted Mr Schor to outlaw restraint techniques like chokeholds.

But it also led to a wider review in which a decision was made to curtail the range of reasons for which police officers can stop people in cars.

"We put in place a policy that said we're not going to have our officers pull people over just for non-public safety reasons," says the mayor.

While offences that pose a danger, like speeding or running stop signs, are still enforced at the roadside, he believes that there are other far more efficient and potentially less confrontational ways to tackle things like cracked taillights or licence plate violations.

Traffic stops that made headlines

*  Derek Scott was shot in the back five times running from a traffic stop in S Carolina that escalated into a struggle. In 2017 the officer was sentenced to 20 years for murder.


*  Sandra Bland killed herself in jail in 2015, three days after being pulled over for a minor traffic violation in Texas. The police officer was filmed arguing with her and threatening her with a stun gun.


*  Daunte Wright was killed in a struggle following a traffic violation. The officer intended to use her Taser but instead reached for her gun. The tragedy in 2021 sparked unrest in Minneapolis.

And telling officers which kind of violations they should pull drivers over for also reduces the risk of conscious or unconscious racial profiling inherent in a more free-for-all approach which, he acknowledged, can lead to escalation.

"You never want a traffic stop to end up in a death of the person being pulled over or of the police officer."

It will now be for a Michigan police investigation to answer the key questions in the case of Patrick Lyoya - what, if any, threat did he pose and what level of force was appropriate in response.

But they are questions that police forces across the US find themselves asking all too frequently.

A recent New York Times investigation of road-side traffic stops found that over a five-year period police officers shot dead more than 400 US drivers who were neither wielding a gun or a knife, nor involved in a violent crime. 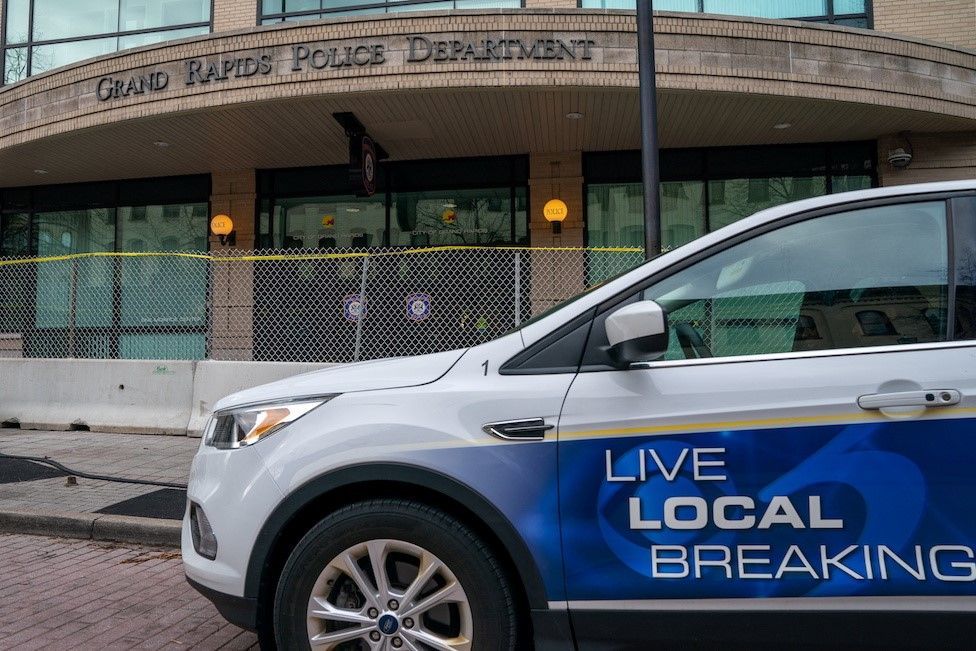 Barricades at the police station at Grand Rapids

As a result of those kinds of figures, Lansing is not the only place trying to think differently about how to reduce them.

Los Angeles and Philadelphia are among other cities and districts where the police or city leaders have been rewriting the rules for routine traffic stops.

Carlton T Mayers, an attorney who works with the National Association for the Advancement of Colored People said he welcomed the changes as a practical approach to a long running problem.

"We've seen young teenagers, black and Latino, having guns pulled on them over a mistaken identity. We've seen a young black man get punched in the face on video during a routine traffic stop," he told me. 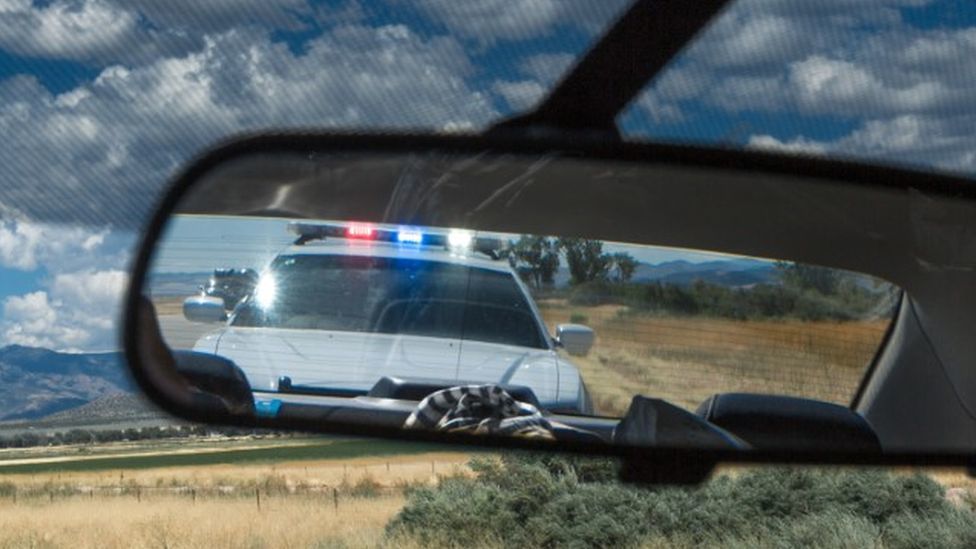 "And this is just within the past two years in Grand Rapids prior to Patrick's tragedy. We know that these issues exist and in order to address it, we need everybody to step up to the plate".

In a country where high levels of gun ownership will remain a fact of life and where there's no easy fix for discrimination and bias, reforming traffic stop rules can at least minimise the chances of minor interactions ending in fatalities.

Mr Mayers welcomes the shift in some police forces towards minor traffic infringements being handled by administrators rather than traffic police.

"Now you have unarmed individuals taking on that responsibility instead of armed law enforcement," he says.

"But at the end of the day, it cannot just be one policy change or one law change. It's always a holistic approach that you need, and it has to be a multi-pronged approach."

A few doors down from where Patrick Lyoya was shot, I met Ida Nixon, a black woman who has lived in the street for 43 years.

"When it's going to get solved, we will never know," she sighed.

"I feel sorry for his family," she said and then added: "And a police officer and his family, you know, what they're going through too."

Patrick Lyoya was fatally shot by a police officer, shortly after grappling over a taser
Add Comment