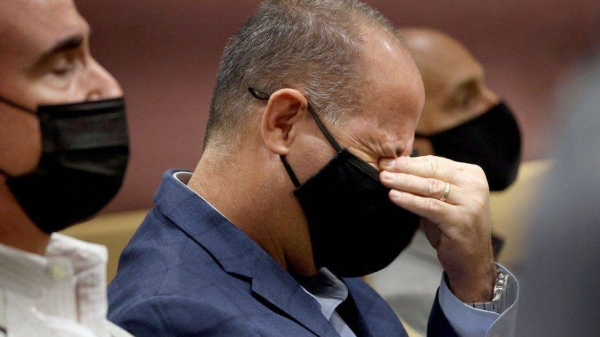 A gunman who killed 17 people at his former high school has gone on trial in Florida, with jurors set to decide whether he faces the death penalty or life in prison.
Nikolas Cruz, 23, pleaded guilty last year to 17 counts of first-degree murder over the 2018 Parkland shooting.

As prosecutors seek the death penalty, defense lawyers are pushing for life in prison without parole.

The trial is expected to last four to six months and will be televised.

It is a rare case of a mass shooter appearing before a jury in the US, as they are frequently killed by police or take their own lives. The shooting at Marjory Stoneman Douglas High School on Valentine's Day 2018 is also the deadliest to go before a jury in the country.

As prosecutors delivered their opening statement on Monday, many of those gathered in the packed courtroom were visibly emotional. Some families affected by the attack have spoken out publicly in support of a death sentence.

They listened intently, often wiping away tears as lead prosecutor Michael Satz detailed a moment-by-moment account of the shooting. He named each person who was shot and wounded, while one woman exited the courtroom in tears.

Satz said he would show the court the murders had been "cold, calculated and premeditated". He recounted how the attacker, then 19, had vowed to become the "next school shooter" in a video filmed just days before.

"I'm going to speak to you about the unspeakable, about this defendant's goal-directed, planned, systematic murder," he said.

In a rare move, the defense team chose not to deliver an opening statement until they present evidence.

As footage from the incident was played in court for the first time, one aggrieved mother covered her ears while another doubled over in loud sobs.

Somebody in the room screamed "Shut if off!" as another piece of audio was played.

The defendant - who wore a dark jumper and a black face mask - had largely looked down at a notepad, occasionally scribbling in it and turning to his lawyers.

It has been more than four years since he stormed a building of Stoneman Douglas - from which he had been expelled - while carrying more than 300 rounds of ammunition.

At least 14 students and three teachers were killed.

Prosecutors will seek to present evidence of the brutal circumstances of the attack, so-called aggravating factors that they hope will sway lenient jurors.

They will detail the stories of each victim as well as those who were injured, including through the use of hundreds of new photographs and videos.

The defense, meanwhile, is expected to flesh out so-called mitigating factors that they hope will show a life sentence is an adequate punishment for the gunman.

Those factors will include his upbringing, claims he was sexually abused as a child and reported mental health issues.