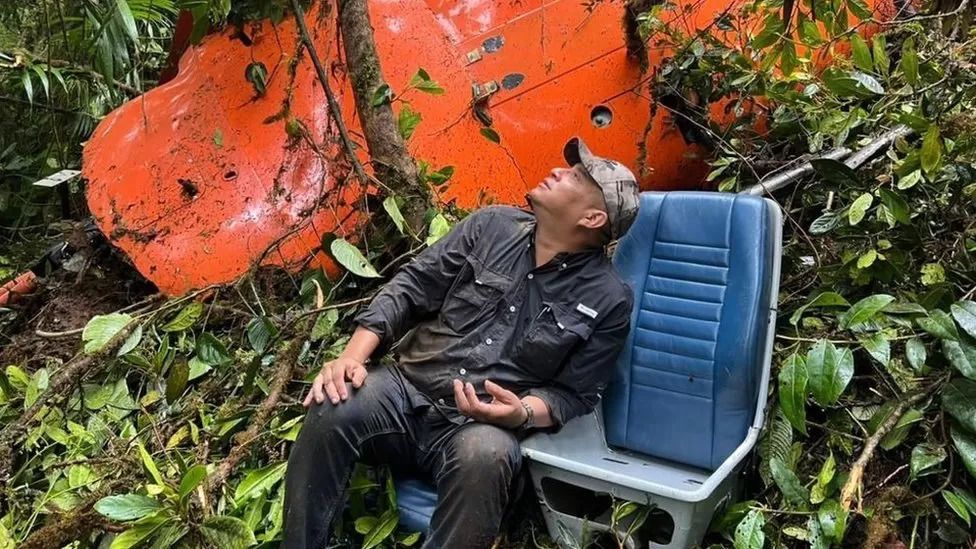 A presidential candidate in Panama posted a dramatic plea for help on social media after his helicopter crashed into the country's jungle.

Dimitri Flores, a independent candidate seeking to stand in elections in 2024, posted the video from the scene after his aircraft crashed in a mountainous area in western Panama.

The helicopter was carrying six people, including Mr Flores, all of whom have since been rescued.

Some of them have broken bones.

"We had an accident here, brother, here at 4,500ft (1,400m) in the mountains," Mr Flores says in the video, while showing the wreckage of the helicopter in dense foliage behind him.

The presidential candidate provides a rough location of the crash and says that several were injured: "We have some broken legs and arms between us. There's six of us. But we have to thank God for being alive."

He gives a rough location for the crash but does not provide details as to what caused the helicopter to crash.

In a later video, the politician introduces two locals who have tracked down the crash site and complains about the slow response by the authorities, saying he has already waited for four hours and 20 minutes.

"I'm very disappointed with the authorities. They flew over here with helicopters several times, helicopters which cost us millions, but which they couldn't land here," he says before adding: "There's much work to be done for our country."

Rescuers from Panama's National Aeronaval Service tweeted that it had taken them three hours by foot to reach the crash site. They thanked locals for helping them locate the passengers in the jungle area.

Once it had become clear that the six passengers were not seriously hurt, some Panamanians took to Twitter to joke about Mr Flores's savvy use of video in the dramatic situation.

One person even asked which mobile phone company the politician was using, saying that his signal in the middle of the jungle appeared to be better than the one they were getting at home.

Mr Flores, a lawyer, is one of a number of people seeking a position on the presidential ballot in 2024 as an independent candidate.