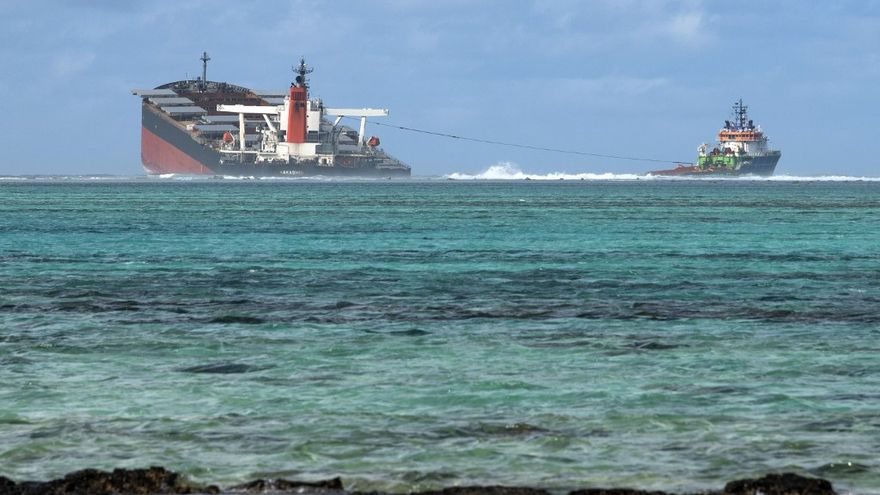 The Panama Maritime Authority (AMP) announced this Saturday that it will help in the investigation to clarify the causes of the incident of the Panamanian-flagged cargo ship that ran aground, spilled oil in the waters of Mauritius and later split in two.
The handlers of the Wakashio ship have been providing information on operations related to the control and extraction of the oil "accidentally released", according to a statement from the Panamanian maritime entity.

The AMP indicated that it fully cooperates with international authorities, complying with the provisions of the Code for the Investigation of Maritime Accidents and Events to clarify the causes of the incident.

A Panamanian delegation made up of the Minister of Maritime Affairs, Noriel Araúz, and the head of the Merchant Marine of the AMP, Rafael Cigarruista, will travel to Mauritius in the coming days in order to strengthen cooperation with the authorities.

The group will be joined by a delegation of Japanese experts sent by the Japan Shipowners Association to collaborate in the investigations into the causes of the grounding and subsequent oil spill.

The Wakashio vessel was registered under the Panamanian flag by a Japanese company.

According to AMP the preliminary reports indicate that the bulk carrier, owned by the Japanese company Nagashiki Shipping Co. Ltd. (Nagashiki Kisen KK), had set sail without cargo on July 14 from Singapore (Offshore Terminal), with destination towards the Brazilian port of Tubarao.

Subsequently, on July 25, near the coast of Mauritius, it was stranded. So far the causes of the event have been determined, due to mechanical failure or human error, said the AMP.

The vessel had passed two recent inspections that determined that the ship both in its structure and its equipment complied with the International Conventions established by the International Maritime Organization (IMO).

At the time of the accident there were 20 crew members of different nationalities on the ship, all with the required certificates for their respective positions and responsibilities on board.

The AMP indicated that of the 2,732 incidents that have occurred in Panamanian flag vessels in the last 10 years, the incidence of sinking is below 0.5%, which represents a low accident rate considering the 8,400 active vessels that the (Panamanian) registry maintains.

Incidents that occur with the Panamanian fleet are reported annually to IMO.

Various organizations and associations linked to the maritime sector expressed their support for the Panamanian Registry of Ships, as well as their concern for publications in the media and social networks that question their credibility and trust.

The Panamanian entity said that it hopes to obtain the audio and video from the Voyage Data Recorder or VDR of Wakashio.

The ship carried 166 metric tons of crude oil, as confirmed at a press conference on the 12th by the Prime Minister of Mauritius, Pravind Jugnauth.

It is unknown whether or not this amount of oil had been extracted on time from the ship, since this morning several local media warned that the fracture in the hull reached 75%.

The area affected by the spill is a region of coral reefs, which had been in the process of rehabilitation for about 15 years, and also of great marine and terrestrial diversity, with important natural reserves a few kilometers away.
Add Comment