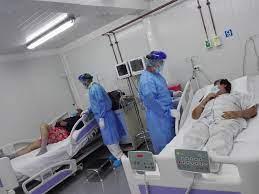 The impact of the biggest increase in Covíd-19 cases since January 2021will be will be reflected within two weeks according to Eduardo Ortega Barría advisor to the Panama Covid-19 Vaccine Research Consortium.
He told La Prensa that there is usually a delay in reality and the incidence of hospitalization is expected in 15 days.

On Friday The Ministry of Health (Minsa) reported 5,043 new infections raising the number of active cases past 30,000 a number not seen since the beginning of 2021 when the second wave of the pandemic occurred.

The latest reports reveal that the Omicron variant is gaining ground by being more contagious.

“Ómicron is the dominant variant in Panama; it has displaced the Delta as has happened throughout the world; maybe 100% today! ', wrote Ortega Barría on his Twitter account.

According to the figures, so far, hospitalizations do not show a significant increase.
#COVID-19  #vaccine  #Covid  #MINSA

O.M. 129 days ago
Really still talking about "cases"? As everybody could know by now, it´s just cases of positive results of improper and unreliable tests. To cut it short: nobody is sick!
View all comments (1)Add comment