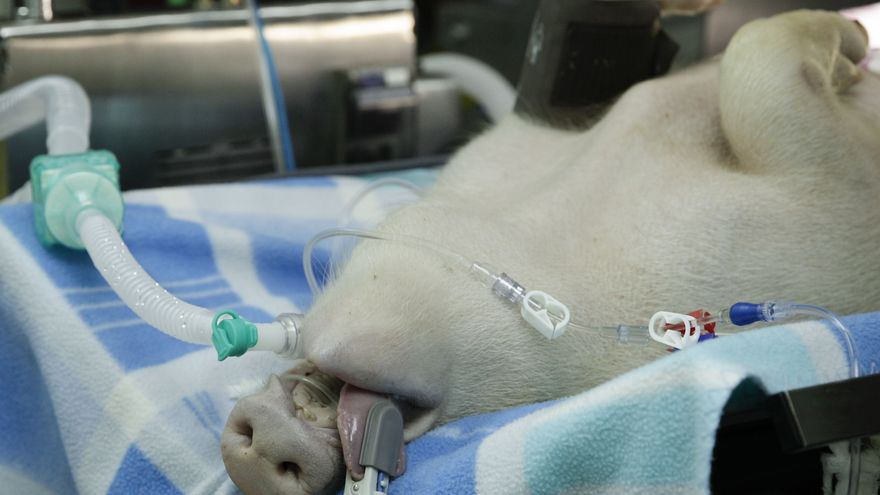 Panamanian intensivist doctors and engineers were conducting tests on Thursday of a prototype of a mechanical ventilator in piglets suffering from lung injuries as part of a project to manufacture these devices in response to the demand for the new coronavirus pandemic.
The tests were carried out at the veterinary complex of the University of Panama and are part of a project called "Ventilators for Panama", which brings together several teams of engineers who were developing prototypes of these locally manufactured devices.

The prototype “PSED-AMBU-PLC” from Panama Service Electronics & Distribution (PSED) is the one that has advanced the fastest in the protocols required to validate the model.

The idea started at the end of March, when the country was registering the first cases of coronavirus and it was feared that in the following months there would be a collapse of health systems due to insufficient infrastructure and respiratory equipment.

Engineer Elida de Obaldia, from the Technological University of Panama and a member of the project's organizing team, told The Associated Press that the prototype being tested is very promising. She explained that to carry out the tests, an animal that is caused a lung injury is used and then an attempt is made to heal using the device. The results are compared to those obtained using a factory certified fan on the piglet.

Intensive care physicians, engineers and veterinarians participate in the trials and record the details of the tests.

90 to 95% of the tests have been successful, said Dr. José Manuel Trujillo, specialist in internal, critical and intensive care medicine. He added that the results of the ventilator tests must be published and scientifically certified.

The work we are doing has to be published and after that it has to be validated and certified, but that is not done in Panama. We have to find a way to certify the ventilators for later use in humans, explained the doctor, who works at the Gustavo Nelson Collado public hospital in the central province of Herrera. We are finishing the tests required to publish the work and do it as it should be, as health is at stake, he said.

The engineer from Obaldia said that the pig trials look very positive.

Prototypes can have that role of being accessible when there is no fan, he said. Knowing that we can do it in Panama and knowing that doctors are willing and that the Ministry of Health is willing to introduce them is what we are waiting for, having that assurance that we are not going to run out of ventilators, he said.

For Panama, a country whose economy is based on the service and logistics sector driven by its geographical position and lacking industrial production, embarking on this initiative is an effort.

These are lines of research that did not exist in Panama before the pandemic arrived, but quickly thanks to this interdisciplinary and inter-institutional collaboration in which practically every professional has done it voluntarily because the initiative does not manage funds, progress has been made and has It has been an enriching experience, said Rolando Gittens, a research engineer at the Institute for Scientific Research and High Technology Services of Panama (INDICASAT), one of the coordinators of the initiative.

Gittens explained that the model being tested is based on the automation of manual resuscitation bags known as Ambu. This design has been able to advance extremely quickly due to all the effort that the team has put in, but also because they have taken a very interesting strategy of using devices, parts and pieces that are already certified for use in patients.

The National Secretariat of Science, Technology and Innovation (Senacyt) is part of the general coordination of the project, which supports the engineering teams with the aspects of approved design, logistics of access to facilities, equipment, contacts and experimental planning that would allow them go from an academic prototype to a finished and validated product.

Panama has maintained - for more than a month - the figures of new infections and deaths from coronavirus, after maintaining a high rebound in the middle of the year. The figures were especially worrisome during the month of July, when almost 800 people died and the daily number of new infections exceeded a thousand. The hospital infrastructure had to be urgently reinforced.
#Coronavirus
Add Comment