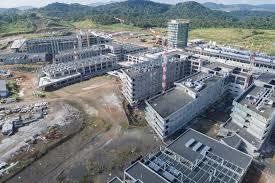 The National Court of Spain has summoned former president Ricardo Martinelli to give an investigatory statement for his possible participation in a corruption scheme related to the Spanish company FCC.
The diligence would be carried out by videoconference, according to Spanish international services.

The cause they are investigating is the alleged payment of $82.7 million FCC, in exchange for contracts in Panama.

The ex-president's appearance will be due to the complaint filed by the Baltasar Garzón International Foundation (Fibgar), which at the end of last year took legal action against Martinelli for alleged money laundering and corruption.

The foregoing occurred on April 6, when the Second Section of the Criminal Chamber of the National Court of Spain, by unanimous decision, under the presentation of magistrate José Ricardo de Prada Solaesa, upheld the appeal filed against the order dated November 17, 2020, and considered it prudent to investigate the former governor, for the crimes of money laundering and corruption in international transactions for works carried out by FCC in Panama.

In a statement, the Fibgar company indicated that, according to“the AntiCorruption Prosecutor's Office, the corruption system that is being investigated in Spain and within the framework of which Martinelli has been charged, consisted of oversizing the supply of steel, billing at double their price, with the aim of allocating the funds to pay bribes to Panamanian officials and politicians, through shell or instrumental companies, led by FCC and Odebrecht executives and an international circuit of bank accounts '.

On January 2, 2020, the Spanish media El Confidencial, reported the first elements that were emerging around investigations for alleged payment of millionaire bribes that involved the FCC company in Panama and other Central American countries.

According to the media report, the works carried out on Vía Brasil by FCC and the participation of the company in the consortium with Odebrecht for the construction of Lines 1 and 2 of the Panama Metro, as well as the construction of the Hospital City, are added to the group of works allegedly rigged through payment of commissions.
Add Comment