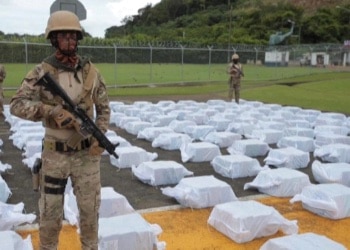 Panama Serves as Latest Gateway for Drugs to Europe

Authorities in Panama are intercepting massive loads of cocaine at ports and in coastal waters, showing how the country is increasingly becoming a major transit hub for drugs as traffickers seek new routes to Europe.

The latest seizure came on November 26, when authorities took in a haul of more than four tons of drugs in three separate maritime interdictions in the Pacific, news outlet Crítica reported. According to Public Security Minister Juan Pino, Panama has seized 177 tons of cocaine and marijuana this year.

Just four days prior to the latest seizure, more than three tons of cocaine were discovered in shipping cargo at Colón, a Caribbean port on the mouth of the Panama Canal. The shipping containers were destined for Belgium and African countries, EFE reported.

According to Luis De Gracia, an official with the National Aeronaval Service of Panama (Servicio Nacional Aeronaval de Panamá - Senan), authorities have intercepted more than 20 tons of drugs in shipping containers this year, a massive jump from the three tons seized in 2020.

“It appears the most desired route is toward Europe,” De Gracia said at a news conference, according to a report by AFP.

Panama’s central role in the global shipping industry makes it an attractive country for traffickers looking to conceal drugs in maritime cargo.

When moving mass quantities of drugs to Europe, traffickers have typically chosen ports in or near cocaine-producing countries, such as Colombia, Brazil and, most recently, Ecuador.

But cargo arriving from these countries is being scrutinized more closely at major ports in Belgium and the Netherlands, the main gateways for cocaine trafficked into Europe. For this reason, traffickers are moving farther afield to ports in Central American countries like Costa Rica and Panama.

Panama being a vital artery for global maritime shipping makes it particularly attractive to smugglers. Some 287 million tons of oceangoing cargo has passed through the Panama Canal this year alone.

Pressure on ports to move vast amounts of cargo quickly onto container ships means that only one in ten containers worldwide gets checked, according to the Wall Street Journal.

The port of Colón, along the northern edge of the Panama Canal, has increasingly become a critical entry point for cocaine. Drug gangs, which have become adept at infiltrating the Colón port through corrupt employees, receive the drugs and smuggle them into cargo. These employees include security guards and dock workers.

Ken 48 days ago
Just shot anyone caught in the drug trade. It stops repeat offenders
View all comments (1)Add comment