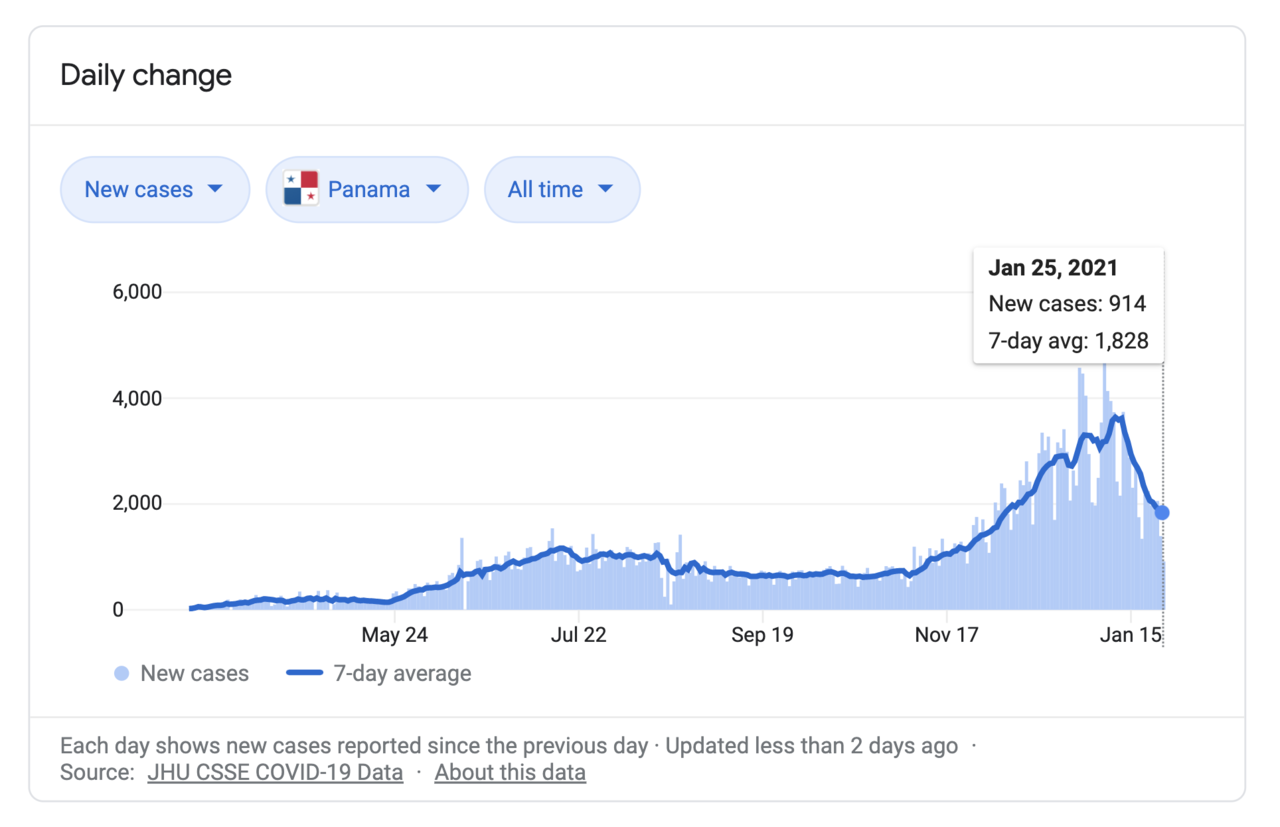 The indicator is encouraging, however, the number of hospitalized and dead remains high.

Arturo Rebollón, epidemiologist and public health specialist, said that the transmission of the new coronavirus in Panama is in the process of stabilization.

He expressed that the country is on a better path, but it still has many active, hospitalized and deceased cases.

Imperial College London classifies the situation in the country as stable / slow growth.

Coronavirus transmission, in the process of stabilization

The third epidemiological week of 2021 (from January 17 to 23) of the Covid-19 disease - which transmits the SARS-CoV-2 coronavirus - closed with fewer infections, fewer active cases and fewer deaths, but with more hospitalized compared to the week before (January 10-16).

Epidemiology reports from the Ministry of Health (Minsa) show that the week just ended 13 thousand 582 cases were reported, that is, 5 thousand 915 cases less than the previous week, when 19 thousand 497 were registered.

The country has been showing a decrease in infections for two consecutive weeks, after the first week of January reached 25 thousand 8 new cases.

Similarly, active cases (in home isolation or hospitalized) decreased, from 55,000 to 48,000 in the country.

Another figure that fell was that of deaths from Covid-19. In the week that ended last Saturday, the Minsa reported 296, and the previous one there were 328, due to the increase in cases and hospitalizations reported after the end of the year celebrations.

As for those hospitalized in the ward and intensive care units, the week that ended 62 admissions were added to reach 2,743 hospitalized. The previous week it was 2,681.

Leonardo Labrador, national head of Epidemiology at the Minsa, indicated that daily evaluations of epidemiological data are being carried out to make decisions, because the least they want is to resume stricter measures.

He added that this decrease in cases should not be a reason for loosening biosafety measures, and that for the next few days it is expected that the number of people hospitalized in wards will be reduced.

Arturo Rebollón, epidemiologist and public health specialist, pointed out that the country is on a better path, but it still has many active, hospitalized and deceased cases.

He pointed out that the impact on the health system is still not seen, that this may happen in two to four weeks.

For Rebollón, the quarantine decreased the cases and also limited access to health services, thus reducing the number of laboratory tests.

In fact, the Minsa reports indicate that 83,673 were carried out this last week, which represents 11,741 less than the previous epidemiological week.

The situation of the transmission of the new coronavirus in Panama is considered by Rebollón as in the process of stabilization.

In this sense, the Imperial College London classifies the situation as stable / slow growth with the data of the last week.

The classification has four categories: declining, stable / slow growth, growth and trend is not very clear.

The World Health Organization maintains Panama in phase four of the pandemic due to high community transmission.

Currently, in cases per million inhabitants, Panama is ranked 15, only surpassed in the American region by the United States, according to the site ourworldindata.org

Regarding the death rate per million inhabitants, Panama is in 11th position worldwide, and is the leader in the region.
#MINSA  #COVID-19  #Covid  #Coronavirus

Oh ya 109 days ago
So to put this another way in shorter and easy to understand format. If your under 60 you only have a 99.9 % chance to LIVE and if your over 60 you chances of LIVING fall to 99.7%.. Owww scary stuffc

NoneOfYourBusiness 109 days ago
What a Bullshit Show!
Worldwide the same...now, that the child-molester is in charge in US. WHAT A CO-INCIDENCE?!
View all comments (2)Add comment