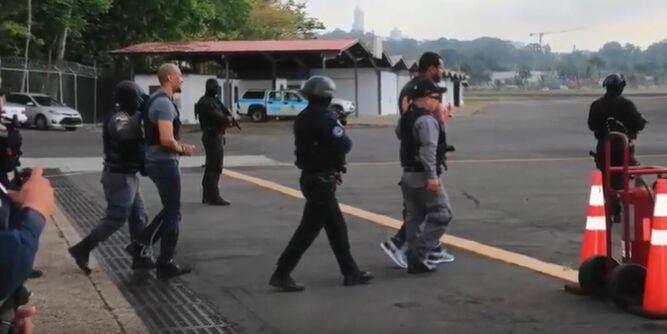 She pointed out that "from the moment they began to finance political campaigns, they have already gone to another level, which is to be able to occupy public positions."

The killing has triggered reactions about the intrusion of organized crime into politics.

The secretary-general of the PRD, Pedro Miguel González , made a call on his personal social network: "Enough of being tolerant of the infiltration of organized crime in politics." and added that the authorities should deepen the investigations, "regardless of political affiliation or social status."

Lara's case is not the first in which public servants and people close to the PRD party organization have been victims of similar crimes reports La Prensa.

In August last year, an official of the Presidency, and leader of the Women's Front of the PRD, Wendy Rodríguez , was murdered in the South Corridor by hitmen in a car.

The same car was later linked to the investigations into the murder of former PRD deputy, Diógenes Yoyi Vergara, in Pacora. Vergara, who was a deputy between 2014 and 2019, was shot dead on February 9, 2021, on the main thoroughfare of Cabra de Pacora.

In August of this year, hitmen assassinated Ovidio Castro , in the basement of the parking lots of the Multiplaza shopping center, in the capital. Subsequent investigations revealed that Castro, alias Tulip, was an official in the San Miguelito mayor's office, the district where he resided.

Lara was a candidate for deputy in the elections passed in the 8-6 circuit and obtained more than 19,000 thousand votes. He was appointed deputy director of the Public Registry in July 2019, when President Cortizo took office. However, he still continued with the electoral and political organization in his circuit, as he walked closely with the current deputy Raúl Pineda and the candidates he supports.

The president of the Democratic Change party , Rómulo Roux , considers that "there is a serious problem of narco politics and organized crime infiltrated in national politics." he said on Telemetro Reporta. He assured that "it is something of years" but considers that the will to solve the problem does not exist.

After the assassination of alias Tulip, Security Minister Juan Pino responded to questions and assured that "Panama is not an unsafe country" and that the cases of violence are about retaliation between gangs. At the moment, Pino has not referred to this case

Pino, who replaced Rolando Mirones in February 2020, argues that if he does not hit the "financial muscle" of organized crime the phenomenon will continue to grow.

Mirones resigned after a gang confrontation in a prison in December 2019 left 13 dead leading to the dismissal of the Minister of Government.

The president of the Panameñista Party, José Blandón , agrees with Roux. Both consider that it is necessary for the authorities to "recognize that there is a problem." Blandón says that Pino and the rest of the managers "are in denial."

He considers that other political and electoral aspects should be explored. "We must reduce the cost of campaigns or even eliminate private financing," said Blandón, because, it is through this route that organized crime infiltrates the political system.

In addition, he highlighted the importance of professionalizing the public service through the administrative career, in order to prevent those involved in illicit activities from serving as civil servants.

At this point, he agrees with the former director of the National Police, Ebrahim Asvat , who points out that drug trafficking has already entered politics, justice and security, because ex-convicts are allowed to be officials, lawyers and police.
Add Comment