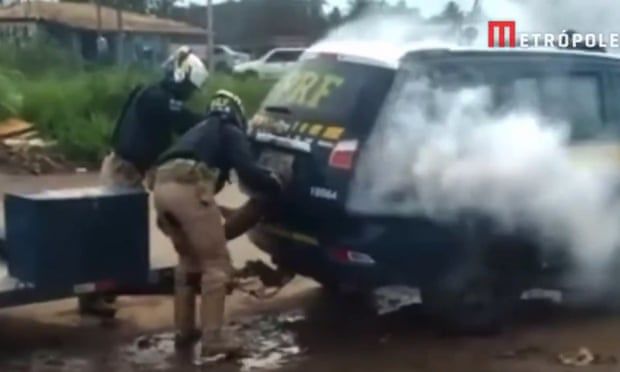 Genivaldo de Jesus Santos dies of asphyxiation as video shows officers forcing him into vehicle then releasing gas grenade
Brazilians have responded with outrage to the death of a mentally ill Black man who was bundled into the back of a police car by officers who then released a gas grenade inside the vehicle.

Genivaldo de Jesus Santos, 38, was stopped by the federal highway police in the city of Umbaúba on Wednesday. Video footage of the incident shows two officers in helmets holding the car boot closed on his thrashing legs, as clouds of gas billow out of the vehicle.

“They’re going to kill the guy,” an onlooker can be heard saying, as Santos’s legs go still.

An autopsy report confirmed on Thursday that Santos had died of asphyxiation. HIs death came two years to the day after George Floyd was killed in Minneapolis by a white police officer who was later found guilty of murder.

According to his family, Santos suffered from schizophrenia, for which he took medication.

Santos’s nephew Alisson de Jesus, who witnessed the incident said he had warned the police that the man was unwell before they released what he described as a teargas grenade. “It was a torture session,” he told the local press.

The horrific death has produced shock in Brazil, where lethal police violence is commonplace and disproportionately affects the country’s Black population. According to the Brazilian Forum of Public Security, police killed 6,416 people in Brazil in 2020. Almost 80% of the victims were Black.

“Police officers turned a car into a gas chamber and executed a mentally ill man,” Renata Souza, a Black activist and politician from Rio de Janeiro, wrote on Twitter. “There are no words in the face of such inhumanity. Brazil is an extermination camp!”

In a statement, federal highway police in the state of Sergipe said that the officers had used “immobilisation techniques” and “instruments of minor offensive potential” after Santos became aggressive. The statement says that Santos was taken to hospital after he became unwell on the way to the police station.

His family said Santos was already dead when he arrived at the hospital.

Santos was killed one day after 26 people died during a police raid in the Vila Cruzeiro favela in Rio de Janeiro, the city’s second deadliest police operation on record. Police are rarely held to account in such cases, but there were widespread calls for the officers in the video to face investigation.

“These two pieces of vermin know they are being filmed and yet they still applied a death sentence. There is no more decency or embarrassment. They tortured and executed the guy,” tweeted Douglas Belchior, a member of the Coalition for Black Rights civil rights organisation.

“How do you get on with your day [after that]? Mine will be terrible, thinking that me or one of my friends could be the next ones,” he said.

The federal police said it would investigate Santos’s death.

Santos was buried on Thursday morning. Locals in Umbaúba staged a protest before his funeral, setting tyres on fire on the road where he was killed and demanding justice, news site G1 reported.

“This was a crime. They acted with cruelty to kill him,” Santos’s widow, Maria Fabiana dos Santos, told reporters.
Add Comment