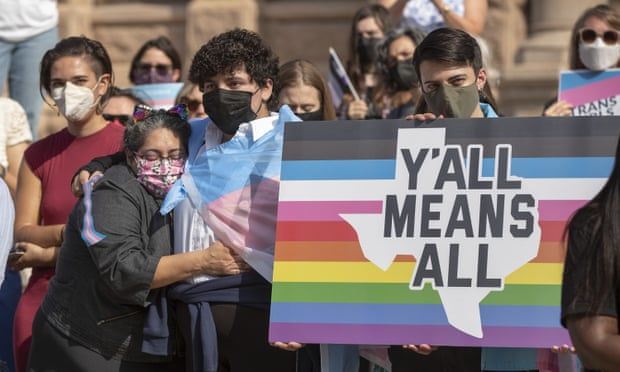 Rights groups argue the attorney general’s opinions, which have no legal bearing, will spread fear and misinformation
Trans rights groups have expressed outrage and fear after the Texas state attorney general Ken Paxton called gender-affirming surgeries and medical care “child abuse” and state governor Greg Abbott ordered the Texas department of family and protective services (DFPS) to conduct an investigation into such practices.

Abbott said: “There is no doubt that these procedures are ‘abuse’ under Texas law, and thus must be halted. [DFPS] has a responsibility to act accordingly. I’ll do everything I can to protect against those who take advantage of and harm young Texans.”

While the attorney general’s opinion has no legal bearing, rights groups argue it will spread fear and misinformation and Abbott’s move has prompted an outpouring of condemnation – as well as celebratory statements from some social conservatives.

“No court here in Texas or anywhere in the country has ever found that gender-affirming care can be considered child abuse,” said the American Civli Liberties Union of Texas in a statement “The opinion released by Paxton cites highly partisan, outdated, and inaccurate information that ignores the consensus of every major medical association and the evidence-based and peer-reviewed standards of care.”

“Trans youth continue to be threatened in Texas by state leadership as part of a politically motivated misinformation campaign that harms children,” the statement added.

The actions come after a wave of anti-trans bills that failed to materialize in recent years, some of which would have included preventing transgender Texans from using bathrooms according to their gender identity rather than their biological sex, in government buildings and public schools and universities.

The first anti-trans bill to pass in Texas, in October 2021, banned public school students from playing on a sports team that they felt matched their gender identity. Instead, they are only permitted to play on sports teams with other members of the same biological sex, as listed on their birth certificates. Texas joined other states like Idaho, Montana, South Dakota, Arkansas, Tennessee, Mississippi, Alabama, West Virginia and Florida, when it passed this law.

Texas’ government has increasingly embraced controversial socially conservative positions in recent years, even as its population has become more diverse and its political leanings have drifted away from being a solid red state.

The state has the second highest number of trans people in the US with some 125,350 adults in Texas identifying as transgender, according to a study from the Williams Institute at the UCLA School of Law. California has the largest with 218,400 trans adults.

“Transgender people already experience stigma and discrimination, harassment and violence simply because of who they are,” Benavidez said.
Add Comment