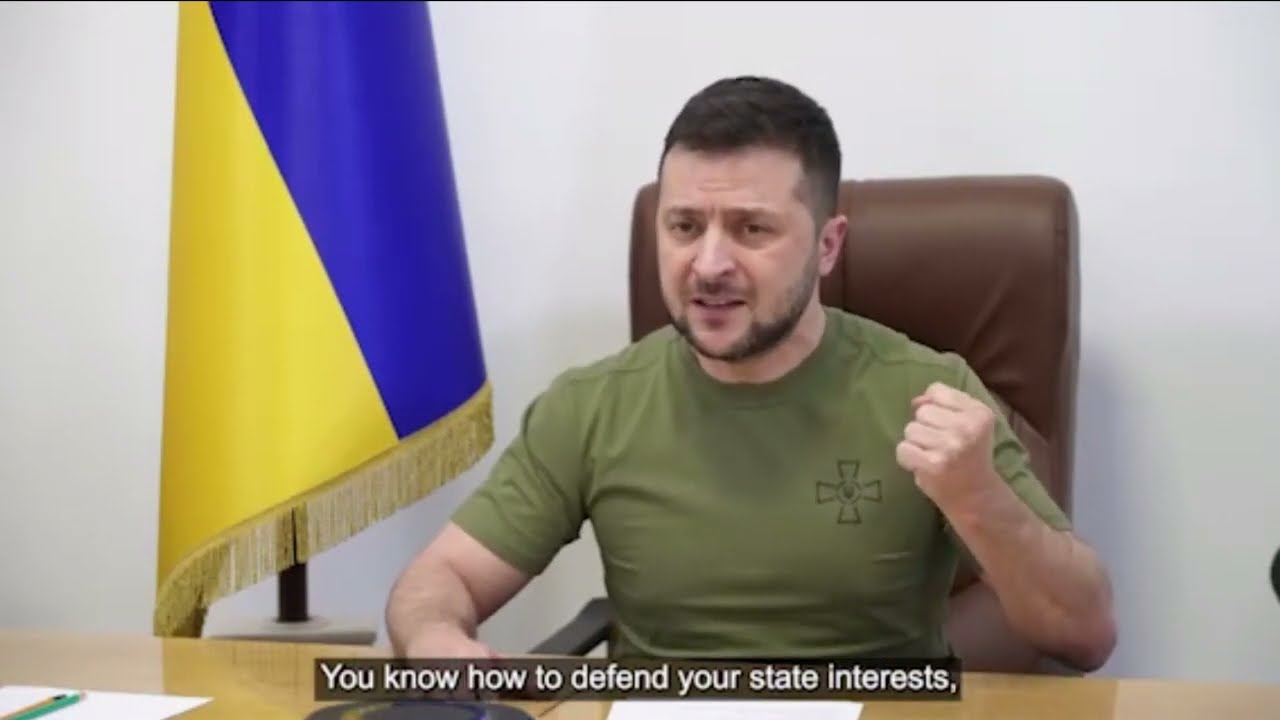 The President of Ukraine quotes in his speech to the Israeli Parliament the words of the Ukrainian-born legendary Prime Minister of Israel, Golda Meir: “We intend to remain alive. Our neighbors want to see us dead.”. He also added: “Russia is using now the same Nazi term from 80 years ago. The said they are fighting for the ‘Final Solution’”.
The State of Israel has a long and very close diplomatic and historical relationship with both Ukraine and Russia. About twenty percent of Israel's population are Jews of Russian or Ukrainian descent.

The State of Israel is assisting Ukraine enormously with the delivery of food and medicine, and the welcoming tens of thousands of Jewish and non-Jewish Ukrainian refugees, far more than Britain and the United States.

Israel is prevented from assisting in the war against Russia and refuse to supply Ukraine with strategic weapons to attack Russian forces, because Israel and Russia are in a ongoing and very sensitive direct conflict in Syria, as well as in an indirect conflict in Iran and Lebanon. Israeli military aid to Ukraine against Russia will lead to Russia's war against Israel through Syria, Iran and Hezbollah in Lebanon. That why Israel cannot take a military action, but help every way elsewhere.

Here is the translation of the speech by President of Ukraine Volodymyr Zelenskyy to Israeli lawmakers on March 20, 2022:

Dear Prime Minister Bennett, thank you very much for your support.

Dear members of the Government of the State of Israel, all attendees, guests, people of Israel!

The Ukrainian and Jewish communities have always been and, I am sure, will be very intertwined, very close. They will always live side by side. And they will feel both joy and pain together.

That is why I want to remind you of the words of a great woman from Kyiv, whom you know very well. The words of Golda Meir. They are very famous, everyone has heard of them. Apparently, every Jew. Many, many Ukrainians as well. And certainly no less, Russians: “We intend to remain alive. Our neighbors want to see us dead. This is not a question that leaves much room for compromise.”

I don’t need to convince you how intertwined our stories are. Stories of Ukrainians and Jews. In the past, and now, in this terrible time. We are in different countries and in completely different conditions. But the threat is the same: for both us and you – the total destruction of the people, state, culture. And even of the names: Ukraine, Israel.

I want you to feel it all. I want you to think about this date. About February 24. About the beginning of this invasion. Russia’s invasion of Ukraine. February 24 – this day has twice gone down in history. And both times – as a tragedy. A tragedy for Ukrainians, for Jews, for Europe, for the world.

On February 24, 1920, the National Socialist Workers’ Party of Germany (NSDAP) was founded. A party that took millions of lives. Destroyed entire countries. Tried to kill nations.

102 years later, on February 24, a criminal order was issued to launch a full-scale Russian invasion of Ukraine. The invasion, which has claimed thousands of lives, has left millions homeless. Made them exiles. On their land and in neighboring countries. In Poland, Slovakia, Romania, Germany, the Czech Republic, the Baltic States and dozens of different countries.

This Russian invasion of Ukraine is not just a military operation, as Moscow claims. This is a large-scale and treacherous war aimed at destroying our people. Destroying our children, our families. Our state. Our cities. Our communities. Our culture. And everything that makes Ukrainians Ukrainians. Everything that Russian troops are now destroying. Deliberately. In front of the whole world.

That is why I have the right to this parallel and to this comparison. Our history and your history. Our war for our survival and World War II.

Listen to what the Kremlin says. Just listen! There are even terms that sounded then. And this is a tragedy. When the Nazi party raided Europe and wanted to destroy everything. Destroy everyone. Wanted to conquer the nations. And leave nothing from us, nothing from you. Even the name and the trace. They called it “the final solution to the Jewish issue”. You remember that. And I’m sure you will never forget!

But listen to what is sounding now in Moscow. Hear how these words are said again: “Final solution”. But already in relation, so to speak, to us, to the “Ukrainian issue”.

It is sounded openly. This is a tragedy. Once again, it was said at a meeting in Moscow. It is available on official websites. This was quoted in the state media of Russia. Moscow says so: without the war against us, they would not be able to ensure a “final solution” allegedly for their own security. Just like it was said 80 years ago.

On the first day of this war, Russian projectiles hit our city of Uman. A city visited by tens of thousands of Israelis every year. For a pilgrimage to the tomb of Nachman of Breslov. What will be left of all such places in Ukraine after this terrible war?

I am sure that every word of my address echoes with pain in your hearts. Because you feel what I’m talking about. But can you explain why we still turn to the whole world, to many countries for help? We ask you for help… Even for basic visas…

What is it? Indifference? Premeditation? Or mediation without choosing a party? I will leave you a choice of answer to this question. And I will note only one thing – indifference kills. Premeditation is often erroneous. And mediation can be between states, not between good and evil.

One can keep asking why we can’t get weapons from you. Or why Israel has not imposed strong sanctions against Russia. Why it doesn’t put pressure on Russian business. But it is up to you, dear brothers and sisters, to choose the answer. And you will have to live with this answer, people of Israel.

Ukrainians have made their choice. 80 years ago. They rescued Jews. That is why the Righteous Among the Nations are among us.

People of Israel, now you have such a choice.