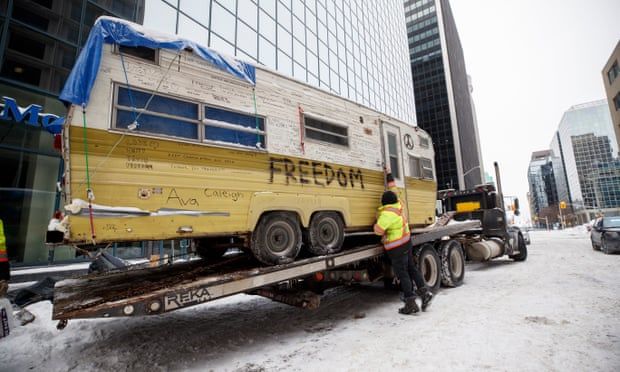 The costs were more than twice the amount the city budgeted for affordable and supportive housing
The truck convoy that paralyzed much of downtown Ottawa for nearly a month cost the city more than C$36m, officials have said, and the figure is expected to rise in the coming weeks.

A memo released by the city on Friday said policing costs accounted for the vast majority of the $36.3m bill.

The so-called ‘Freedom Convoy’ arrived in the Canadian capital at the end of January, initially a protest over Covid-19 vaccine mandates, but eventually turning into a broader demonstration against the incumbent government, with calls to overthrow the prime minister.

In mid-February, after the federal government invoked emergency legislation, hundreds of police dismantled the barricades and arrested nearly 200 people, including influential figures in the protest and convoy organizers.

In a breakdown of the costs associated with the occupation, the city said it paid out $27.7m to police officers for wages, accommodation for police from out of town, vehicle expenses and food. Costs for bringing the Royal Canadian Mounted Police to aid in dismantling the protests were not included in the $27m figure.

Ottawa is expected to ask the federal government to reimburse the city for “all costs associated with the response”, city manager Steve Kanellakos told councillors Friday.

The figure probably does not reflect the broader economic damage to the city. Local businesses in the downtown area were forced to shut down for weeks and city infrastructure will also need repairs.

The $36m is more than double what the city earmarked for affordable and supportive housing in the most recent budget.

In addition to a stiff economic cost, the convoy has already exacted widespread political damage in the city, deepening rifts and leading to raucous council meetings.

Midway through the protests, police chief Peter Sloly resigned amid mounting criticism that he and his team had let the protests get out of hand.

“This city is in chaos and it doesn’t need to be,” councillor Anne Meehan said before abruptly resigning from the police services board.

All other board members also resigned in the days that followed, except for board chair councillor Diane Deans, who was removed by a council vote.
#COVID-19  #vaccine  #Covid
Add Comment