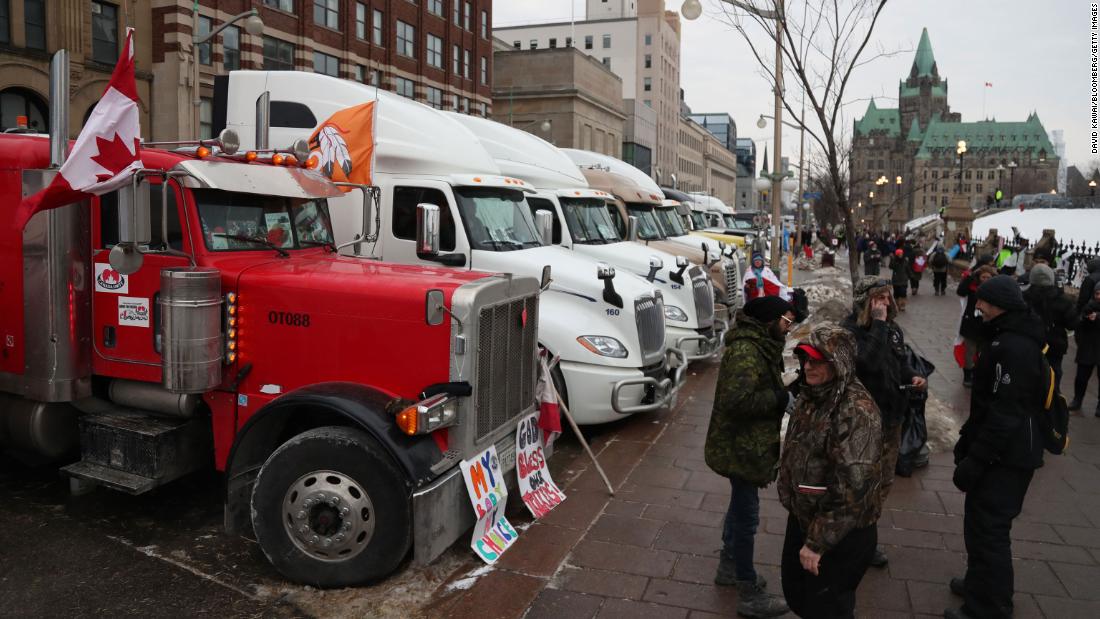 A nearly three-week protest in Ottawa over mandated Covid-19 precautions in Canada may be approaching its end as police tell demonstrators to either leave immediately or face legal consequences.

"The action is imminent," said Steve Bell, Ottawa Police Service interim chief. "In the past few days, we have been communicating directly with the unlawful protestors. We have told them they must leave, and we have warned them the consequences of disobeying these rules."

Officers began erecting barriers and fencing throughout the capital city's downtown core Thursday in an effort to clear the area of demonstrators, according to a series of tweets from Bell. The secured area encompasses most of Ottawa's downtown and is far larger than the protest footprint to date. 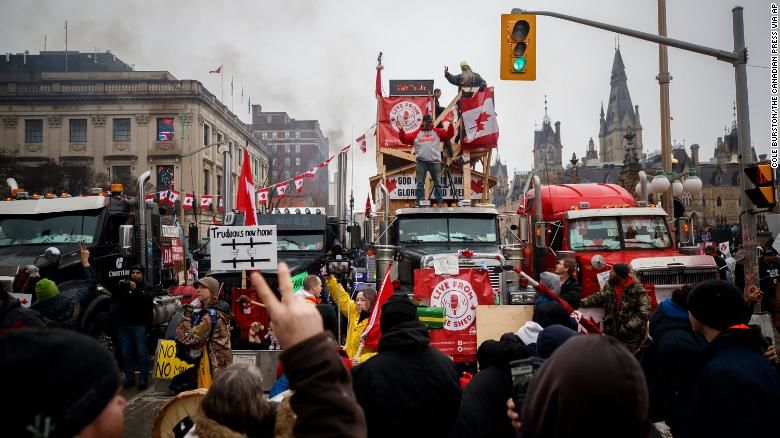 Protesters and supporters gather to listen to speakers on Thursday, Feb. 17, 2022, in Ottawa.

"Only those with lawful reason to enter the core, such as residents, businesses, and others with lawful reasons, will be allowed in the area," the chief said. "The unlawful protesters must leave the area and will not be provided access."

Bell's statement was an attempt to assure residents that the city was restoring order by removing vehicles and people that are blocking traffic.

"We know you have been through a lot and we are committed to returning your streets back (to) normal," he told residents. "We know that the increased police presence may be distressing to some. They are here to keep you safe and complete our mission."

Many demonstrators have vowed to hold out for as long as necessary, and the federal government has moved to enact emergency powers to freeze financial support of the protests despite opposition in Parliament.

During a news conference, Bell was asked about a timeline for removing protesters and concerns regarding demonstrations over the weekend.

"What I can tell you is this weekend will look very different from the past three weekends," he said.

Bell maintained that authorities would like the protests to end peacefully and that they've considered "many different circumstances that could exist within the footprint of the demonstration and in and around it, and we're actually planning for several different eventualities."

Beginning with a group of truckers arriving in Ottawa in late January objecting to a vaccine mandate, the protest has morphed into a general airing of grievances against all Covid-19 safety protocols.

The incessant noise, shutting down of area businesses and reports of hate crimes and vandalism by protesters have exacerbated the nerves of many residents. 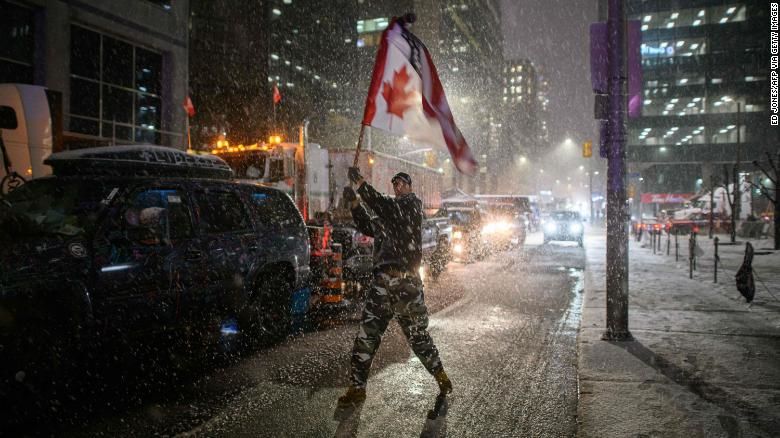 Snow falls around a demonstrator waving a flag outside parliament in Ottawa on February 17, 2022.

Following criticism for the prolonged situation and the recent stepping down of the chief, Ottawa police said in a statement Wednesday that anyone coming to the capital to join the protest could have their vehicles seized. A charge or conviction "may lead to denial in crossing the USA border," the statement said.

The Children's Aid Society of Ottawa, a nonprofit organization that gets funding from the Ontario government, is urging demonstrators to make care arrangements for their children as police move forward with ending the protest.

"If parents and children are separated following police efforts in ending the demonstration in the downtown core, CASO will work to reunite families as soon as possible," the organization said in a statement.

The latest moves from police come as border crossing blockades along the Canadian-US border have winded down this week.

There were no delays at the Emerson checkpoint in Manitoba Thursday morning, according to the Canadian Border Services Agency's website, after the peaceful departure of protesters Wednesday ended the last remaining border disruption. No one was charged, no vehicles were towed and no injuries occurred, officials said.

As authorities work to clear demonstrations in Ottawa, Prime Minister Justin Trudeau's plan to invoke the Emergencies Act to end the protest and cut off the financial support is being criticized by opposition leadership in Parliament.

Candice Bergen, interim leader of the Conservative Party, said Wednesday the party won't be supporting a motion by the federal government to use those powers, according to CNN newsgathering partner CTV.

Bergen said Trudeau didn't do enough to bring an end to the demonstrations before invoking the act, CTV reported.

"The first act that he does when he has a chance to do something -- he doesn't go through step one, two, three -- he goes straight to 100 and invokes the Emergencies Act," Bergen told CTV News. "I don't think anything that we will see will change our mind, we will be opposing it."

The act, passed in 1988 and never utilized before, can temporarily suspend citizens' rights to free movement or assembly. It can also provide for the use of the military, but Trudeau has said this would not be necessary.

Trudeau defended his decision to invoke the Emergencies Act during an address to Parliament on Thursday.

"We did it to protect families and small businesses. To protect jobs and the economy. We did it because the situation could not be dealt with under any other law in Canada," Trudeau said. "For the good of all Canadians, the illegal blockades and occupations have to stop, and the borders have to remain open."

The Prime Minister told Parliament that about half of the funding for the demonstrations is being supported by people in the United States.

"These illegal blockades are being heavily supported by individuals in the United States and from elsewhere around the world," he said. "We see that roughly half of the funding that is flowing to the barricaders here is coming from the United States. The goal of all measures, including financial measures in the Emergencies Act, is to deal with the current threat only and to get the situation fully under control."

To invoke powers under the Emergencies Act, the government must propose a motion in the House and Senate explaining why federal officials need the powers and specifying what actions will be taken, then both the House and Senate must confirm the motions, according to CTV.

Debate on the House motion was to begin Thursday and a vote will be held soon, said Government House Leader Mark Holland, a member of Trudeau's Liberal Party.

Trudeau said invoking the act "is about keeping Canadians safe, protecting peoples' jobs and restoring faith in our institutions." 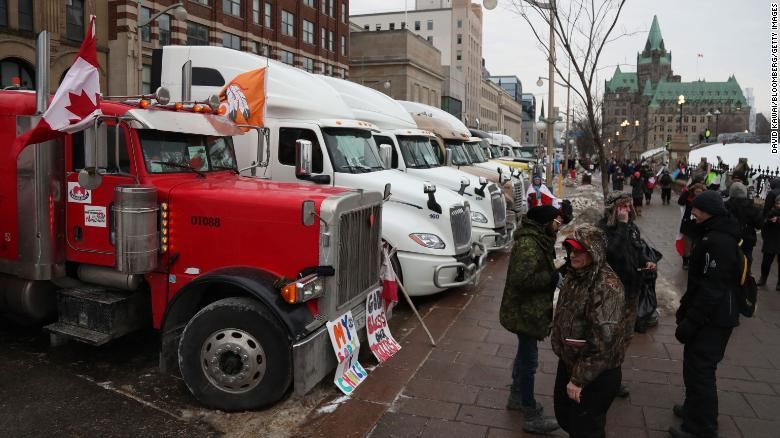 Trucks parked on Wellington Street, in front of Parliament Hill, during a demonstration in Ottawa, Ontario, Wednesday.

4 charged with conspiracy to commit murder at Alberta protest

While the Ottawa shutdown is ongoing and the Manitoba blockade dissolved without confrontation, authorities who ended other border demonstrations earlier this week were met with some resistance.

Police in Ontario announced the arrest of up to 30 protesters while clearing out a blockade Sunday in Windsor, near the Ambassador Bridge, a critical link for US and Canadian commerce that connects to Detroit.

In Coutts, Alberta, police obtained a warrant and searched three trailers Monday associated with a small, organized group within a larger protest at the Alberta-Montana border. More than a dozen firearms, multiple sets of body armor and a large quantity of ammunition and high-capacity magazines were seized, the Royal Canadian Mounted Police said.

Four people have been charged with conspiracy to commit murder in connection to the Coutts border blockade, the RCMP said Tuesday. Other charges include possession of a weapon for a dangerous purpose and mischief over $5,000, police said.

"Monday's weapons seizure and subsequent arrests speak to the serious criminal activities taking place during this protest and illegal blockade," Alberta RCMP Deputy Commissioner Curtis Zablocki said in a video statement issued Tuesday. "The dangerous, criminal activity occurring away from the TV cameras and social media posts was real and organized, and it could have been deadly for citizens, protesters and officers."

Nine other people were arrested and charged with possession of a weapon for a dangerous purpose and mischief over $5,000.

"I am happy to share with Albertans that the border is fully open, traffic is moving through smoothly and all protestors have moved out of the area," he said.

"We are maintaining a presence at this time to ensure the border remains a safe passageway for Albertans."