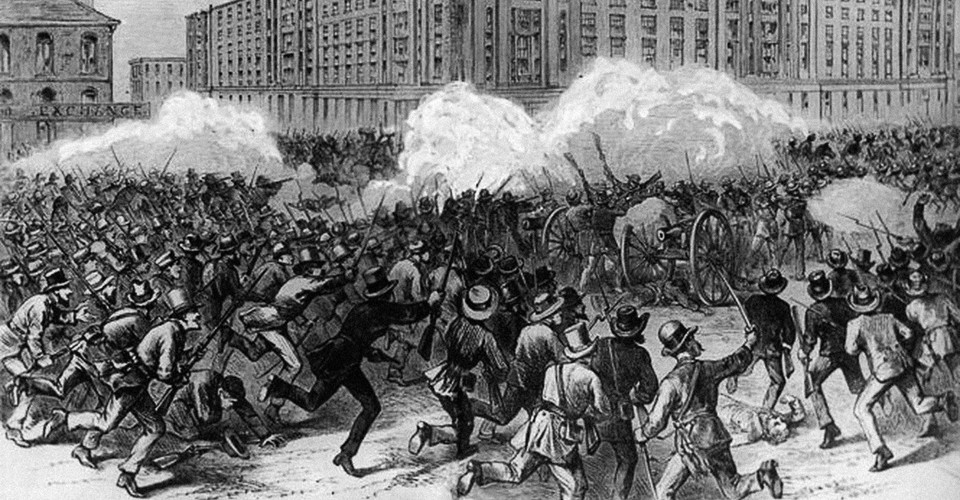 Only Accountability Will Allow the U.S. to Move Forward

America cannot change its history, but it can surely learn from it.
A white mob stormed government offices in an effort to overthrow the duly elected leadership, overwhelming the local police and killing several officers in a violent clash.

This description is not only of the insurrection in Washington, D.C., on January 6, but of the Battle of Liberty Place in New Orleans, on September 14, 1874. The Crescent City White League, a white-supremacist group made up of some of the city’s elite as well as former Confederate soldiers, sought to overthrow the Republicans, a party of pro-abolition white Americans and newly enfranchised Black Americans. Thousands of members of the White League fought against the integrated Metropolitan Police force. The insurgents held the statehouse, armory, and downtown New Orleans for three days, finally retreating before the arrival of federal troops that restored the elected government.

The insurgents were never charged with any crimes, and history remembered them kindly. In 1891, a monument to the battle was erected, not to commemorate the police officers who had died but to honor the members of the Crescent City White League who had lost their lives. This monument to white supremacists stood in our city until 2017, when, amid much controversy and backlash, we removed it and three other Lost Cause Confederate statues.

Scenes of white mobs played out across the country during Reconstruction, as “militias” used terror to assert their will upon African Americans, perhaps most notably in the Greenwood massacre in Tulsa, Oklahoma. The events typically followed a similar pattern: White rage and terror were normalized. No one was held accountable. History was rewritten, often to celebrate violence. Myths were created.

In the case of the January 6 insurrection, the U.S. cannot allow the same pattern to unfold. Some Republican politicians are calling for “unity,” but the country cannot come together without truth and accountability.

Accountability starts with understanding what happened on January 6. Not all of the rioters were white supremacists or members of white-nationalist militias, but some were—enough that the U.S. Department of Homeland Security has now raised the threat level on what it calls “Domestic Violent Extremists” motivated by “long-standing racial and ethnic tension.”

The government must examine whether the lack of preparedness at the Capitol was a result of implicit bias (not believing that these armed white rioters could be dangerous) or complicity. The authorities must also charge the insurrectionists who stormed the building. Donald Trump’s incendiary actions and House and Senate Republicans’ votes to reject the Electoral College count were traitorous. Trying to overthrow an election is a serious threat to a republic. They must be held responsible too. Impeaching Trump was the right call, but now the Senate must follow through on a conviction.

Accountability also goes beyond that day’s events. Americans must recognize the bigger truths the past four years have exposed. White supremacy is alive and well in our society, a shameful truth many of us already knew. However, white supremacists have now been further emboldened to operate openly with little consequence. Even as hate crimes quadrupled from 2016 to 2017, the Trump administration showed little interest in white-extremist violence.

White supremacists also saw their views on diversity and inclusion elevated by Trump and a faction of the Republican Party. It’s no coincidence that one of Trump’s final acts was his sham 1776 Commission, which sought to discredit the work of The New York Times’ 1619 Project, an analysis of how slavery shaped American history.

The “findings” of Trump’s commission, released on Martin Luther King Jr. Day, are the ultimate insult to our multiracial democracy. As I noted in 2017, surely we are far enough removed from slavery to acknowledge that it was wrong. And yet, the commission sought to normalize it, noting that “the institution of slavery has been more the rule than the exception throughout human history,” and that no nation could have been formed without compromise on slavery.

The commission went even deeper down the dark hole of denial. Progress made by the civil-rights movement was described as running “counter to the lofty ideals of the founders.” Programs developed to address racial inequity were labeled “identity politics.” Trump and his allies promoted a politicization of our history, fomenting racial resentment, a disservice to all Americans and to the essential idea of our country.

For such a large portion of the population to hide their heads in the sand about the country’s past—not to mention its current structural racism—is anti-American and just plain wrong. The 1619 Project’s reframing of slavery as central to our founding and our present, the Black Lives Matter movement’s focus on institutional bias in policing, and last year’s reckoning on racism have all illustrated that our country has never really lived up to the ideals set out in our founding documents.

This moment gives the U.S. an opportunity to view its history—and present—through a more equitable lens. Why don’t more Americans know about Greenwood or the Battle of Liberty Place? Why don’t students learn about the white mobs that have sought to upend our democracy time and again? Why is it that even after hundreds of symbols honoring the Confederacy, including statues and street names, have been removed, more than 1,500 remain?

Black Americans have been begging white Americans to look at the voluminous examples of systemic racism in our society for decades, and the U.S. still has not fully reckoned with how that racism affects the country. Even after the attempts to delegitimize the first African American president, the murder of Trayvon Martin, the brutal deaths of Michael Brown and Alton Sterling and George Floyd and Breonna Taylor at the hands of police. Even after the Charleston Mother Emanuel Church massacre, Colin Kaepernick’s kneeling, the Charlottesville white-supremacist rallies, and the death of Heather Heyer. After the 1619 Project, record-breaking, diverse Black Lives Matter protests, and the debate over the veneration of Confederate symbols and monuments. Even after COVID-19’s disproportionate devastation of communities of color.

As President George W. Bush said at the dedication ceremony for the National Museum of African American History and Culture, “A great nation does not hide its history. It faces its flaws and corrects them.” Anything less would be unpatriotic.

Patriotism, after all, isn’t about wrapping oneself in the American flag and idolizing a version of the past that worked for only a few. Patriotism is standing up for the freedoms of all Americans and embracing our diversity as our greatest strength. It requires us to honor and learn from the richness and complexity of our entire history.

In the weeks, months, and years following the Battle of Liberty Place, Americans decided to look the other way. The country must approach this moment in history with clarity of thought and purpose, not just for January 6, but for the centuries of actions and inactions that led the country to this point. We cannot change our history, but we can surely learn from it. If we don’t, our democracy may be the ultimate lost cause.
#Donald Trump  #COVID-19  #Covid
Add Comment