One Of The World's Richest Countries Is Becoming Hotter And Unlivable

Global warming is smashing temperature records all over the world, but Kuwait - one of the hottest countries on the planet - is fast becoming unlivable.

Trying to catch a bus at the Maliya station in Kuwait City can be unbearable in the summer.

About two-thirds of the city's buses pass through the hub, and schedules are unreliable. Fumes from bumper-to-bumper traffic fill the air. Small shelters offer refuge to a handful of people, if they squeeze. Dozens end up standing in the sun, sometimes using umbrellas to shield themselves.

Global warming is smashing temperature records all over the world, but Kuwait - one of the hottest countries on the planet - is fast becoming unlivable. In 2016, thermometers hit 54C, the highest reading on Earth in the last 76 years. Last year, for the first time, they breached 50 degrees Celsius (122 Fahrenheit) in June, weeks ahead of usual peak weather. Parts of Kuwait could get as much as 4.5C hotter from 2071 to 2100 compared with the historical average, according to the Environment Public Authority, making large areas of the country uninhabitable.

For wildlife, it almost is. Dead birds appear on rooftops in the brutal summer months, unable to find shade or water. Vets are inundated with stray cats, brought in by people who've found them near death from heat exhaustion and dehydration. Even wild foxes are abandoning a desert that no longer blooms after the rains for what small patches of green remain in the city, where they're treated as pests.

"This is why we are seeing less and less wildlife in Kuwait, it's because most of them aren't making it through the seasons," said Tamara Qabazard, a Kuwaiti zoo and wildlife veterinarian. "Last year, we had three to four days at the end of July that were incredibly humid and very hot, and it was hard to even walk outside your house, and there was no wind. A lot of the animals started having respiratory problems."

Unlike countries from Bangladesh to Brazil that are struggling to balance environmental challenges with teeming populations and widespread poverty, Kuwait is OPEC's number 4 oil-exporter. Home to the world's third-largest sovereign wealth fund and just over 4.5 million people, it's not a lack of resources that stands in the way of cutting greenhouse gases and adapting to a warmer planet, but rather political inaction. 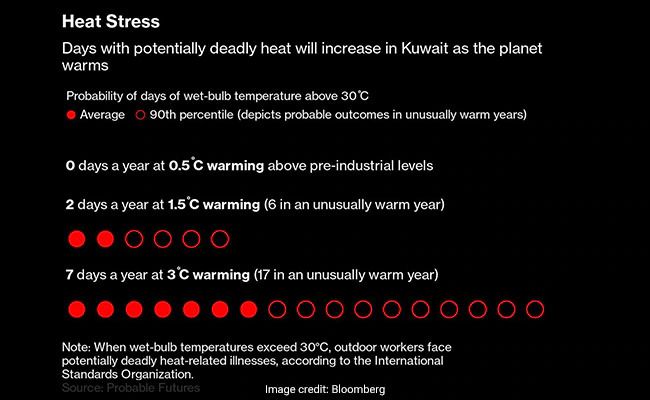 Even Kuwait's neighbors, also dependent on crude exports, have pledged to take stronger climate action. Saudi Arabia last year said it would target net-zero emissions by 2060. The United Arab Emirates has set a goal of 2050. Though they remain among the biggest producers of fossil fuels, both say they are working to diversify their economies and investing in renewables and cleaner energy. The next two United Nations climate conferences will take place in Egypt and the UAE, as Middle East governments acknowledge they also stand to lose from rising temperatures and sea levels.

Kuwait, by contrast, pledged at the COP26 summit in November to reduce greenhouse gas emissions 7.4% by 2035, a target that falls far short of the 45% reduction needed to meet the Paris Agreement's stretch goal of limiting global warming to 1.5C by 2030. The nation's $700 billion sovereign wealth fund invests with the specific aim of hedging against oil, but has said that returns remain a priority as it shifts to more sustainable investing.

"Compared with the rest of the Middle East, Kuwait lags in its climate action," said Manal Shehabi, an academic visitor at Oxford University who studies the Gulf nations. In a region that's far from doing enough to avoid catastrophic global warming, "climate pledges in Kuwait are [still] significantly lower."

Sheikh Abdullah Al-Ahmed Al-Sabah, head of the EPA, told COP26 that his country was keen to support international initiatives to stabilize the climate. Kuwait also pledged to adopt a "national low carbon strategy" by mid-century, but it hasn't said what this will involve and there is little evidence of action on the ground.

That prompted one Twitter user to post pictures of wilted palm trees, asking how his government had the nerve to show up.

Jassim Al-Awadhi is part of a younger generation of Kuwaitis increasingly worried about their country's future. The 32-year-old former banker quit his job to push for a change that experts argue could be Kuwait's key to addressing global warming: revamping attitudes toward transportation. His goal is to get Kuwaitis to embrace public transport, which today consists only of the buses that are mostly used by migrant workers with low-paying jobs who have no choice but to put up with the heat. 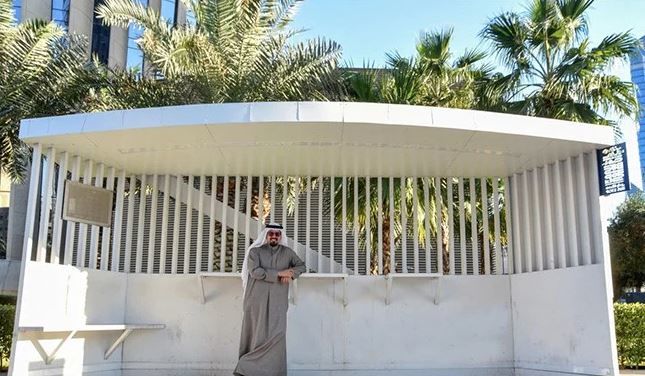 Jassim Al-Awadi in a bus shelter on Jan. 9. Al-Awadi is part of a younger generation of Kuwaitis worried about their country's climate future.

It's an uphill struggle. Though Kuwait has among the world's highest carbon-dioxide emissions per capita, the idea of ditching their cars is completely foreign to most residents in a country where petrol is cheaper than Coca Cola and cities are designed for automobiles.

The London School of Economics, which conducted the only comprehensive survey of climate opinions in Kuwait, found older residents remain skeptical of the urgency, with some speaking of a conspiracy to hobble Gulf economies. In a public consultation, everyone over 50-years-old opposed plans to build a metro network like those already operating in Riyadh and Dubai. And the private sector sees climate change as a problem that requires government leadership to solve.

"When I tell companies let's do something, they say it's not their business,'' Al-Awadhi said. "They make me feel I'm the only one who has problems with transport."

That's partly because most Kuwaitis and wealthy residents are shielded from the effects of rising temperatures. Homes, shopping malls and cars are air-conditioned, and those who can afford it often spend summers in Europe. Yet, the heavy reliance on cooling systems also increases the use of fossil fuels, leading to ever hotter temperatures.

The situation is much worse for those who can't escape the heat, mainly laborers from developing countries. Though the government prohibits peak afternoon outdoor work during the hottest summer months, migrant workers are often seen toiling in the sun. A study published in Science Direct last year found that on extremely hot days, the overall number of deaths doubles, but it triples for non-Kuwaiti men, more likely to take on low-paid work.

It's a cycle that's all too clear to Saleh Khaled Al-Misbah. Born in 1959, he remembers growing up when homes rarely had air conditioners, yet felt cool and shaded, even in the hottest months. As a child, he played outside through months of cooler weather and slept on the roof in the summers; it's too hot for that now. Children spend most of the year indoors to protect them from either burning sun or hazardous pollution, something that's contributed to deficiencies in vitamin D - which humans generate when exposed to the sun - and respiratory ailments.

Temperature changes in the 2040s and 2050s will have an increasingly negative impact on Kuwait's creditworthiness, according to Fitch Ratings. Yet despite the growing risks, squabbling between the Gulf's only elected parliament and a government appointed by the ruling family has made it difficult to push through reforms, on climate or anything else.

"The political deadlock in Kuwait just sucks the oxygen out of the air," said Samia Alduaij, a Kuwaiti environmental consultant who works with the U.K.'s Centre for Environment, Fisheries and Aquaculture Science and UNDP. "This is a very rich country, with a very small population, so it could be so much better."

So far, there's been little progress on plans to produce 15% of Kuwait's power from renewable sources by 2030, from a maximum of 1% now. Oil is so abundant that it's burned to generate electricity, as well as fuel the 2 million cars on the road, contributing to air pollution. Some power plants have switched to gas, another fossil fuel that's relatively cleaner but can leak methane, a powerful greenhouse gas. Consumption of electricity and water, heavily subsidized by the government, is among the world's highest per capita, and it's proven politically toxic to even hint at cutting those benefits.

"That obviously leads to a lot of waste," said Tarek Sultan, vice chairman of Agility Public Warehousing Co. When fossil-fuel powered electricity "is subsidized, solar technologies that can provide viable solutions get priced out of the competition," he said.

Even if the world manages to cut emissions quickly enough to stave off catastrophic global warming, countries will have to adapt to more extreme weather. As it stands, experts say Kuwait's plan is nowhere near enough to keep the country livable. 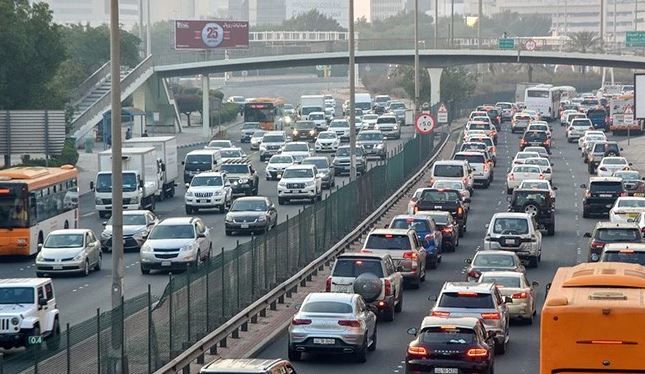 If it starts now, said Nadim Farajalla, director of the climate change and environment program at University of Beirut, a lot can be done in the coming decades, but that would need to include protection against rising sea levels, making cities greener and buildings less energy intensive. It also needs to focus on transport, a leading cause of CO2 emissions.

Khaled Mahdi, secretary general of Kuwait's Supreme Council for Planning and Development, said the government's adaptation plan is aligned with international policies. "We clearly identify roles and responsibilities, and all the challenges in the country," he said, though he admitted that "implementation is the usual challenging issue."

If the government is dragging its feet, young Kuwaitis like Al-Awadhi aren't.

His advocacy group Kuwait Commute is starting small by campaigning for bus stop shelters to protect passengers from the sun. National Bank of Kuwait, the country's biggest lender, recently sponsored a bus stop designed by three female graduates. Still, like much of the private sector, they remain outside the decision-making process.

"I think I'm finally making progress," said Al-Awadhi, who hopes that getting more Kuwaitis to ride buses will fuel enough demand to improve the service. But "it has to be driven by the government. It's the chicken before the egg."