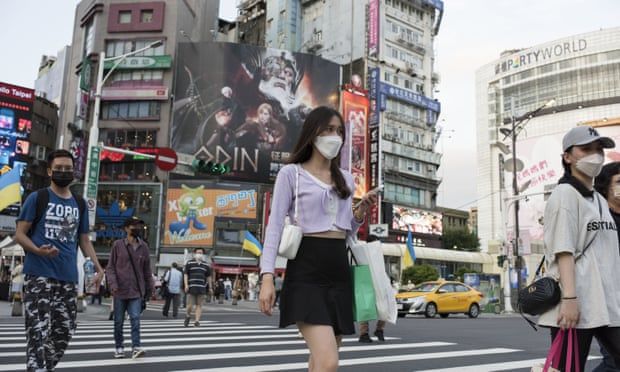 Once a zero-Covid poster child, Taiwan learns to live with the virus

By rejecting super-strict lockdowns, the island is pioneering a new and ‘very successful’ approach at odds with China and Hong Kong

Taiwanese people don’t mind queueing. They’ll do it for a well-reviewed restaurant, promotional giveaways, or to take an Instagram photo at a popular tourist site. But at 3pm outside a Gongguan pharmacy in Taipei, there’s grumbling in the line. It’s an inconvenient time to leave work, but for now it’s one of the only ways to get your hands on a rapid Covid-19 test.

Twenty minutes after the sales window opens, a woman walks out to the waiting customers: they’ve sold out. People are frustrated, having waited for up to two hours, and some leave to try again tomorrow. Two elderly people lean over a phone, looking at a map for other pharmacies nearby.

The pharmacist tells the Guardian that the store is only given 78 tests each day, and always sell out in less than half an hour. She laughs when asked if they can request more.

The disappointed customers rush to another pharmacy, where an employee with a megaphone says there are only tests left for the next four people. When one of those four says they aren’t there to buy a test, the woman in fifth place jumps and shrieks with joy. 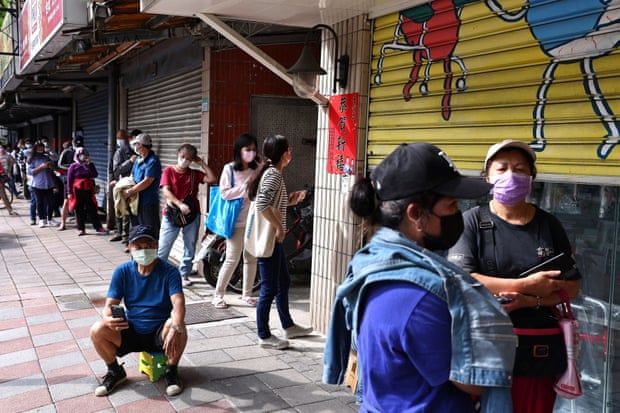 People wait to purchase Covid antigen tests at a pharmacy in Taipei.

An hour earlier, the central epidemic command centre (CECC) had reported more than 30,000 cases for the previous 24 hours – the first time Taiwan has seen such numbers in this pandemic.

Once a poster child for the success of zero-Covid, Taiwan is now dealing with an “Omicron tsunami”. In response – and in stark contrast to regional neighbours – health authorities have decided zero-Covid is no match for the new variant and have flipped the switch to “living with the virus”.

“It is the right decision, and it’s also the decision we had to make,” says Dr Chen Chien-jen, Taiwan’s former vice-president and professor of epidemiology.

Taiwan closed itself off in early 2020, and employed a regime of stringent contact tracing, social restrictions and personal hygiene measures which it kept even as vaccines and antivirals were developed. It defeated an outbreak of the Alpha strain and another of Delta in 2021. But after the highly virulent Omicron began affecting countries in November and December, Chen says he and other scholars advised the government to start shifting towards living with the virus.

“The CECC decided we should adopt the policy some time later when booster shots reached around 40-45% [several months away], but Omicron never waits for anyone,” he tells the Guardian. Instead, it began spreading through the community in March.

Hong Kong, Taiwan and China were until now the last three major economies still clinging to zero-Covid. In Hong Kong the policy failed and the virus overwhelmed the city with disastrous results. In China, a steadfast commitment to it has produced arduous and economically damaging lockdowns, especially in Shanghai, with no end in sight. Taiwan appears to have seen both options, and decided on a third.

It’s called the “new Taiwanese model”: an acknowledgment that they can’t stop the spread of Omicron, but that they can try – to use an early pandemic-era phrase – to flatten the curve.

Cases are still rising and experts predict a peak is three weeks away, with as many as 3.5 million of Taiwan’s 24.5 million people expected to eventually be infected, and up to 16,000 dead. As daily tallies ticked past 30,000 this week, the CECC continued to ease restrictions, drop mandatory QR code check-ins, and reduce quarantine times. It urged people to maintain mask-wearing, work from home if they could, reduce gatherings, get vaccinated and take a rapid test if they felt symptoms. It’s also trusting people to self-report, and isolate or quarantine at home.

So is it working? In many ways, yes. Chen notes the fatality rate of the outbreak is still extremely low, below 0.2%. This year 66 people have died with Covid-19, bringing Taiwan’s total to 919 out of more than 345,000 cases. More than 99.75% of Omicron cases are mild or asymptomatic, and residents and businesses are still going about their days without lockdowns or panic. Visitor groups are being gradually allowed to return.

Hospitals are not at capacity, thanks to Taiwan pre-emptively ending a policy of mandatory hospitalisation for all cases. The same policy in Hong Kong had filled its hospitals before the wave began, but in Taiwan just 44% of hospital ICU beds (more than 62% in Taipei) were full as of Friday. 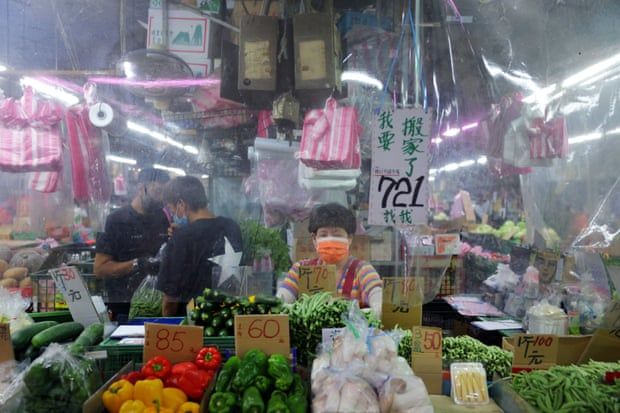 Masks and plastic sheets have been used in stores in Taipei to prevent the spread of Covid.

Prof Yen Muh-yong, the director of the infectious disease department at Cheng Hsin hospital, says Taiwan’s diversion of cases away from hospitals has been “very successful in relieving pressure” so far. But he fears it still won’t be enough for this wave and urges more integration of local and district services, to create surge capacity in the workforce and reduce hospital crowds.

As cases rise there are also criticisms, including that the government is more reactive than proactive. Yen says transitioning to coexistence was the right decision, “but the brain is giving directions the hands and feet are not coping with”.

“The government did not plan in advance for the procedures and the preparedness to live with the Omicron tsunami.”

Rules and regulations change almost daily and incrementally. The death of a two-year-old boy last month highlighted communication failures exacerbated by Taiwan’s entrenched bureaucracy. The child’s parents had wanted to send their son to hospital but got conflicting instructions from multiple health services. By the time they got him to hospital it was too late.

In factories, migrant workers have once again been discriminated against with unequal rule enforcement and eased restrictions, and poor vaccination rates among the very old and very young remain too low. Many elderly people have refused to get vaccinated against Covid-19, and the government only recently allowed vaccination for under-12s, despite lobbying from anxious parents.

Across the capital city, hospitals are reporting crowds of patients who are not sick with Covid. A nurse and anaesthetist at a Taipei hospital tells the Guardian her colleagues are understaffed and overworked, and don’t feel well supported. “Everyone is nervous and they want to have PCR tests so they come to the emergency room, but there are also the patients who need to get more care than other people.”

The nurse says there is not enough protective equipment or backup to replace staff who go on leave because they caught the virus, are a close contact, or need to care for family. Instead, they’re told to keep working as long as they test negative, and are still subject to a pandemic ban on health workers leaving the country.

Chen says authorities are addressing the issues in hospitals, but concedes Taiwan didn’t prepare an adequate supply of rapid tests, and still don’t have enough despite growing official reliance on them. On Monday, in response to mounting criticism, the government reverted to allowing some retail stores to sell non-rationed tests at market prices, but it didn’t have access to brand details or supply levels.

There is generally widespread support for Taiwan’s efforts. Perhaps one of the biggest hurdles for the “new Taiwanese model” was to flip the narrative from a fear-filled zero-Covid commitment to gradual coexistence. The lower severity of Omicron has helped, says Chen. Taiwan also came under more pressure to reopen after cautious neighbours like South Korea and Japan joined the US and Europe in opening.

Recent polling by the Taiwan Public Opinion Foundation found an almost even split of 45% in favour of a coexistence policy compared to 46.3% who weren’t. In July 2021 – at the tail end of the Alpha outbreak – 58.8% of people were worried the government was lifting restrictions too soon. Support for the CECC and minister Chen’s handling of Covid has also increased in that time, from 66.4% of respondents to 77.7%.

Yen says government messaging has been “well disseminated and transparent”. “People are not happy about the deficiencies in testing kit supply, and they are crowding in emergency departments but this can all be improved,” he says.

Yen says “there will of course be casualties”, but waiting out the worst of the pandemic until vaccines, treatments and a milder strain came along has brought them a long way. Taiwan is no longer the poster child for zero-Covid, but is hoping it can model something else instead – a calm and steady transition to rejoin the world after more than two years locked away.