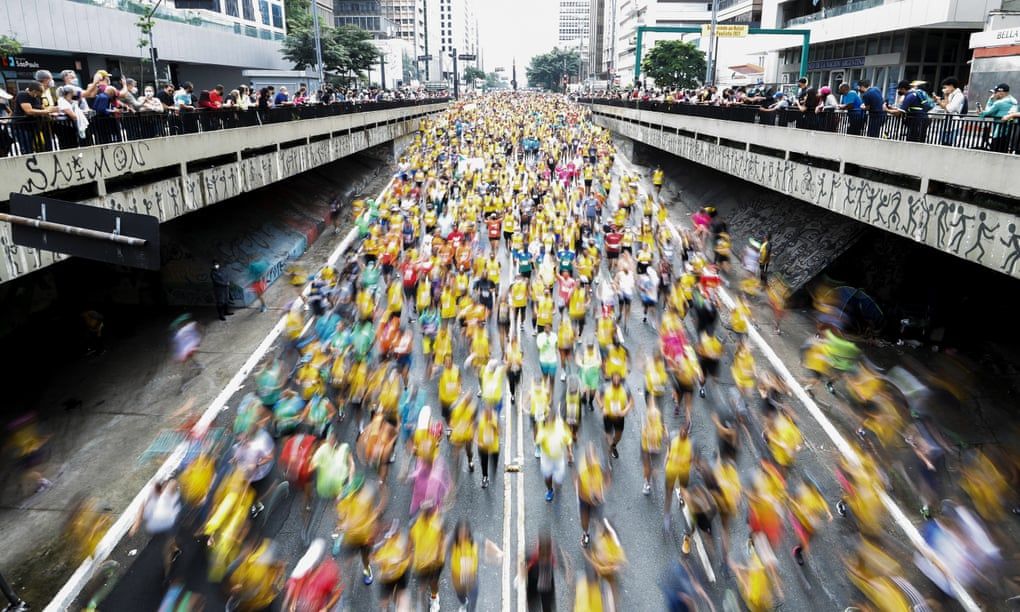 As the pandemic’s second, gruelling year drew to a close and Covid rates in Rio de Janeiro plunged to levels unseen since it began, the Brazilian city’s health secretary, Daniel Soranz, celebrated a desperately needed respite.

“We’ve been through such painful, difficult months … this is now a moment of hope,” the 42-year-old doctor said last November as carioca life regained some semblance of normality, hospitals emptied and the city’s effervescent cultural scene was reborn.

But the new year, and the arrival of the highly contagious Omicron variant, has brought Soranz and many others crashing back down to Earth as coronavirus cases surge across Latin America with consequences that remain unclear.

“It’s really tiring,” Soranz admitted this week as infections in his beachside city soared to their highest ever levels and plans for Rio’s rumbustious annual carnival were cast into doubt.

“This pandemic has been going on for almost two years. It’s exhausting. But there’s nothing to be done,” Soranz said, noting how 20% of Rio’s health workers – about 5,000 people – had been infected since December.

Similar angst is being voiced around South America, which, having witnessed some of the pandemic’s bleakest moments – with bodies dumped in mass graves and patients starved of oxygen in overwhelmed hospitals – had been enjoying a long-awaited moment of optimism after becoming one of the world vaccination champions. Nearly 65% of South Americans have been fully vaccinated, according to the University of Oxford’s Our World in Data project, compared with about 62% in Europe and the US, and less than 10% in Africa.

So far Argentina seems to be the South American country worst hit by Omicron. Over the last week it registered over 50% of South America’s daily cases, with just 11% of its population, and had the world’s seventh-highest number of daily cases.

Although cases are rising in a straight line from a daily average of about 2,400 a month ago to more than 130,000 now, authorities say they are not unduly worried. Their assumption is that Covid has become an endemic disease and vaccination is the only necessary safeguard. The government is relaxing restrictions even more than last September when restaurants, football matches and entertainment venues reopened after a sharp dip in cases, and the outdoor mask mandate was lifted.

“In the evolution of the disease you can see that it is really like chickenpox, the flu or that type of disease. The transition to the endemic will no longer require testing all cases and the role of isolation will change,” the health minister, Carla Vizzotti, told journalists on Tuesday.

Health official Sandra Tirado predicted cases could begin to fall in the next two weeks and pointed to Córdoba province where Omicron infections were already coming down. 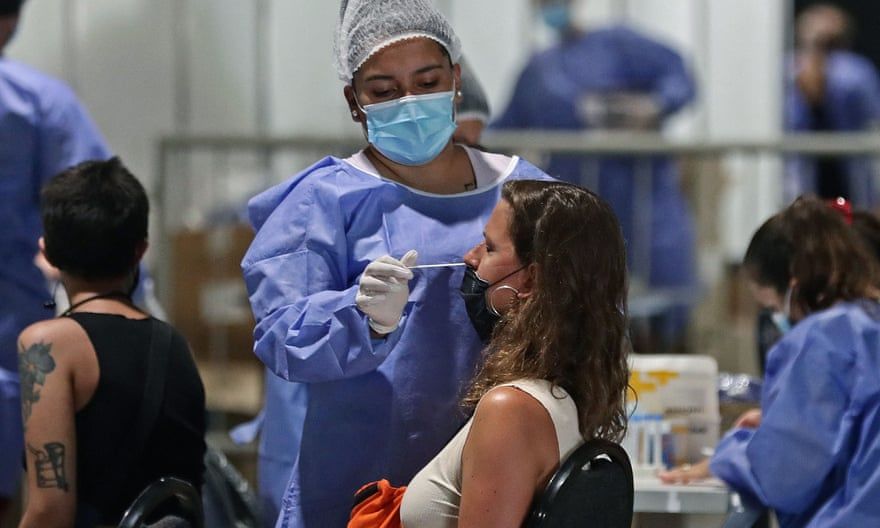 A health worker swabs a woman for Covid-19 at a free testing center in Buenos Aires on Monday.

Arnaldo Dubin, an ICU doctor at a private Buenos Aires hospital, said he had deep misgivings about Argentina’s Covid policy and believed mask mandates had to return. “It’s horrifying. You have a very serious Covid situation that is paradoxically simultaneous with a total relaxation of safeguards.”

Peru, which has one of the world’s worst per-capita death tolls, is also suffering, with more confirmed infections in the first week of January than during its ferocious second wave in early 2021. Other South American countries including Bolivia, Guyana and Uruguay have also seen infections jump while further north, Omicron appears to be rattling Mexico.

On Saturday, a record 30,671 coronavirus cases were registered. On Monday, Mexico’s president, Andrés Manuel López Obrador, announced he had tested positive for the second time in a year and was isolating. “I think it’s the flu,” López Obrador, whose dismissive handling of the pandemic has been criticised, had told a press conference earlier in the day. He appeared without a mask despite admitting feeling hoarse.

Brazil, which was already facing a major influenza outbreak, is also under pressure although a statistics blackout apparently caused by a hacking attack on the health ministry is hampering efforts to track the surge.

Isaac Schrarstzhaupt, a data scientist who monitors Covid statistics, said Brazil was clearly careening into a new wave, with states such as Rio Grande do Sul and São Paulo seeing a “vertiginous increase” in infections similar to that in Europe. “But [because of the blackout] we don’t know the scale of it and I fear we’ll only understand when hospitals start raising their hands to say: ‘Hey, we’re in trouble over here.’”

Schrarstzhaupt warned: “Even if there’s a 95% reduction in severe cases, if we hit one million cases a day like the US, the remaining 5% will still be a very big number.”

Rio’s health secretary said there was no doubt Omicron was driving a major Covid outbreak there. It had taken Omicron just 17 days to become Rio’s dominant variant, responsible for more than 98% of cases. Previous variants took more than 45 days to do the same.

Soranz voiced apprehension about the coming days and could not confirm February’s carnival would go ahead. However, high vaccination levels seemed to be helping prevent a more dramatic crisis – as appears also to be the case in neighbours such as Peru and Argentina, and European countries such as Portugal. Ninety-six per cent of Rio’s adults have been double jabbed and 32% boosted. Soranz said 13 Covid patients were admitted on Sunday: 11 unvaccinated and two with only one shot.

“There’s no way to predict what’s going to happen – but we can see it’s spreading much faster and that this is not being accompanied by severe cases or fatalities,” Soranz said, before adding a word of caution: “This could change.”