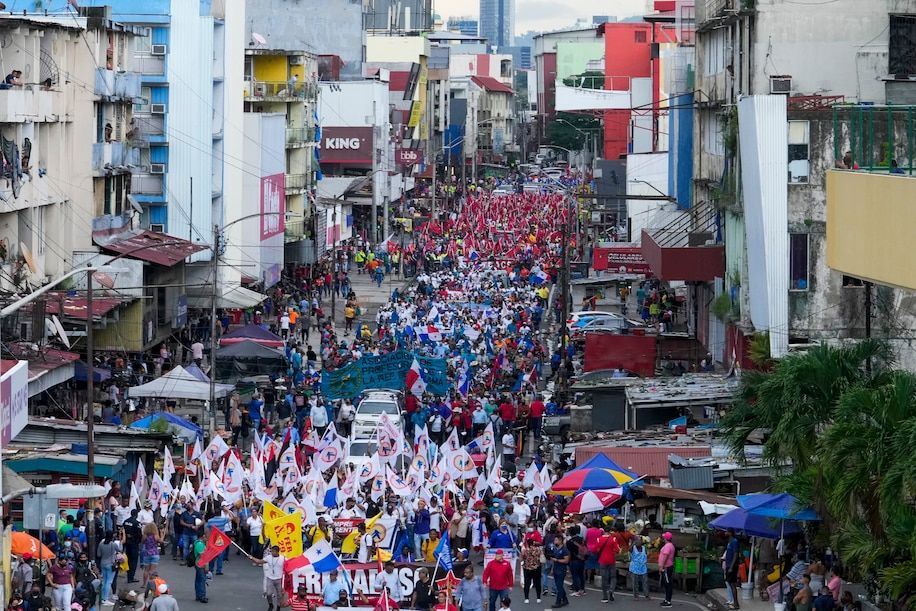 Panamanians angry over inflation press on with protests

Frustrated Panamanians have taken to the streets in protest for more than a week, building upon anger over fuel prices that have nearly doubled to show their general dissatisfaction with the government.
The protests grew Tuesday despite Presient Laurentino Cortizo’s promise a day earlier to extend a freeze on gasoline prices to all Panamanians rather than just the public transport system.

Thousands marched in the capital and cities across Panama, while roadblocks brought traffic to a standstill on the Pan-American Highway.

Cortizo said Monday that he understood citizens’ dissatisfaction, and he blamed the COVID-19 pandemic and Russia’s invasion of Ukraine for the rise in prices.

“The cup of tolerance and patience that the Panamanian people showed during various (administrations) overflowed with the price of fuel, which is abusive, among other things,” said Miguel Antonio Bernal, political science professor at the University of Panama. “Additionally, we have the great corruption that has been unleashed.”

Leaders of a teachers’ strike, which gave the initial spark that set off the nationwide protests more than a week ago, criticized Cortizo’s announcement of a fuel price freeze while talks to end the protests were underway.

They called the offer insufficient. Other groups have called for a larger reduction in the cost of gasoline.

“The price of gasoline is overwhelming those of us who have to travel to teach classes in our schools,” said Ilbis Rujano, a public school teracher in the central province of Veraguas who has participated in the protests. “Besides that, the cost of food rose, which is a hit on the poorest familias who have to send their children to school.”

“This can’t be tolerated,” she said.

Panama, a country of 4 million people, has historically maintained a fairly stable service-based economy that uses the U.S. dollar as its official currency. That has practically made inflation a non-issue in recent times. Now economists put inflation around 4%, which is significant but well below some other countries in the region, such as Mexico, where it is around 8%.

Indigenous groups from western Panama, among the country’s most impoverished, joined the teachers’ protest as have workers from Panama’s powerful construction industry, who called for a protest Wednesday.

On Tuesday, the government asked protesters not to block buses that use the Pan-American Highway moving migrants who enter Panama from Colombia to the border with Costa Rica so they can continue their journey north. On Monday, buses that tried to cross roadblocks were damaged by protesters, though the government said no migrants were injured.

Me 199 days ago
Thanks for the response. Check the I Go Panama FB group or Prensa that have daily updates on the fluid situation that is impacting everyone in Panama.. As the English Language Panama periodical I would think that your publication would be a leader in Panama news. Maybe I'm the only one but I think people that look at your page would like Panamanian news first and the political commentary from around the world later. Or, we could just look at Prensa and forget this site.

To Me 202 days ago
Hi Me.
This is an open platform. You can add any news you find interesting by clicking on “add your news” link above.

The system automatically checking the content with social media and other sources, and publish it with or without additional information, pictures or videos the system finds all over the net about the subject.

If something is missing is only because nobody found it interesting enough to share it here. That’s the beauty of the system, but as any other news outlet it has it’s pro and cons.

Me 202 days ago
How about some updated information. It's Saturday and you just post this?
View all comments (3)Add comment