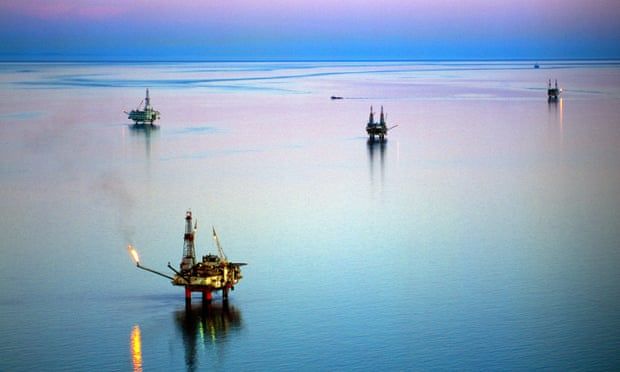 Fossil-fuel firms want to turn violence and bloodshed into an oil and gas propaganda-generating scheme. Their goal: a drilling bonanza
Last week, we all watched in horror as Vladimir Putin launched a deadly, catastrophic attack on Ukraine, violating international treaties across the board. Most of us swiftly condemned his actions and pledged support for the Ukrainian people whose country, homes and lives are under attack.

But the fossil-fuel industry had a different take. They saw an opportunity – and a shameless one at that – to turn violence and bloodshed into an oil and gas propaganda-generating scheme. Within hours, industry-led talking points were oozing into press releases, social media and opinion pieces, telling us the key to ending this crisis is to immediately hand US public lands and waters over to fossil-fuel companies and quickly loosen the regulatory strings.

Our top priority must be ending Putin’s hostilities, but as chair of the US House committee on natural resources, I feel duty-bound to set the record straight. We can’t let the fossil-fuel industry scare us into a domestic drilling free-for-all that is neither economically warranted nor environmentally sound.

Despite industry’s claims to the contrary, President Biden has not hobbled US oil and gas development. In fact, much to my deep disappointment and protest, this administration actually approved more US drilling permits per month in 2021 than President Trump did during each of the first three years of his presidency. Before the pandemic, oil and gas production from public lands and waters reached an all-time high, and the current administration has done little to change that trajectory over the last 13 months.

Fossil-fuel companies and their backers in Congress also profess that more drilling on public lands and waters would lower gas prices for Americans. But if that’s true, why hasn’t record oil extraction from both federal and non-federal lands over the last decade done anything to consistently lower, or at least stabilize, prices at the pump?

The fact is that crude oil is a volatile global commodity. Worldwide supply, demand, and unpredictable events – like wars – influence the price of gas, not the current administration’s decision to approve a few new leases or permits.

Even if we take industry’s claims at face value, nothing is keeping fossil-fuel companies from more drilling on public lands right now. The oil industry already controls at least 26m acres of public land and is sitting on more than 9,000 approved drilling permits they’re not using.

They have a similarly gratuitous surplus offshore, where nearly 75% of their active federal oil and gas leases, covering over 8m acres, have yet to produce a single drop. Any new leases issued today wouldn’t produce anything of value for years, or even decades in some cases.

If industry did start to ramp up production from federal leases, the overall increase to the total US supply would likely be marginal. In 2020, public lands and waters only accounted for 22% and 11% of oil and gas production, respectively. The vast majority of oil and gas resources are beneath state and private lands – not public lands or federal waters.

With the facts laid bare, we see the fossil-fuel industry’s crocodile tears for what they are – the same old demands for cheaper leases and looser regulations they’ve been peddling for decades. These pleas have nothing to do with countering Putin’s invasion or stabilizing gas prices, and everything to do with making oil and gas development as easy and profitable as possible.

The US is the world’s top oil and gas producer. Doubling down on fossil fuels is a false solution that only perpetuates the problems that got us here in the first place.

And quite frankly, we can’t afford to maintain the status quo. In its newest report the Intergovernmental Panel on Climate Change (IPCC) issued its most dire warning yet on the rapidly accelerating climate crisis. If we fail to enact major mitigation efforts, like curbing fossil-fuel development, both quickly and substantially, we will “miss a brief and rapidly closing window of opportunity to secure a livable and sustainable future for all”.

Fortunately, there is a path forward that simultaneously cuts the lifeline to fossil-fuel despots like Putin, stabilizes energy prices here at home, and creates a safer, more sustainable planet. We must wean ourselves off our oil and gas dependence and make transformational investments in cleaner renewable energy technologies, like those in the Bipartisan Infrastructure Law, the Build Back Better Act and the Competes Act, and we must do it now.

The fossil-fuel industry has had hold of the microphone for far too long. It’s time we let the facts speak for themselves.
Add Comment