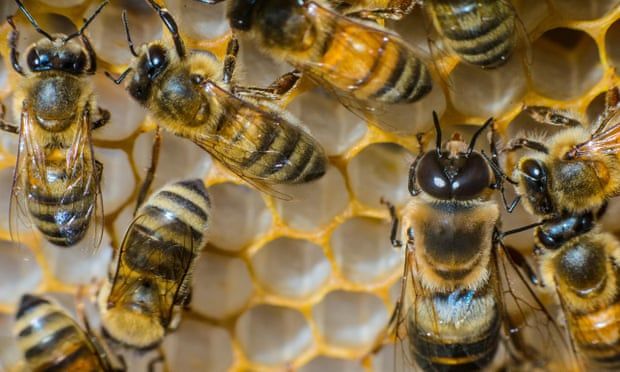 Austin Bellamy has awoken from a medically induced coma after mistakenly cut into a bees’ nest while trimming a tree
An Ohio man who was stung at least 20,000 times by bees – and even ingested some of the insects – during a mishap while he was cutting tree branches is expected to recover, according to his family.

Austin Bellamy, 20, climbed high into a lemon tree in Ripley, Ohio, last Friday to help trim it when he mistakenly cut into a bees’ nest, his mother, Shawna Carter, has recounted, in addition to authorities’ accounts of his injuries.

“When he started cutting them, that’s when the bees came out, and he tried to anchor himself down, and he couldn’t … He was hollering, ‘Help! Help me! Help!’ And nobody would help him,” his grandmother, Phyllis Edwards, told the Cincinnati Enquirer.

According to Carter, Bellamy was unable to get down from the tree because he was harnessed. Edwards watched from below alongside Bellamy’s uncle as they were unable to climb the ladder since they were also under attack by the bees.

“I was going to try and climb the ladder to get to Austin … I see how high he was … but I couldn’t get to him because I was surrounded [by] bees,” Edwards said.

Paramedics and the Ripley fire department responded to the scene and had to cut Bellamy out of the tree.

“He was just covered in bees … screaming and yelling, crying for help,” said Carter. “It was just too much for me to take. It looked like he had a black blanket on his head down to his neck, down to his arms.”

Carter said that the fire department told her that the bees were a hybrid of the western honeybee and east African lowland honeybee that is considered much more defensive than other bee varieties.

Emergency responders transported Bellamy to the University of Cincinnati medical center by helicopter where doctors discovered that he had also ingested about 30 bees.

Pictures posted on social media show Bellamy hooked up to a ventilator with eyes swollen shut and bee-stings covering his head, face and hands entirely.

“[The bees] left stingers like an inch long. When I rubbed his head on Friday before they airlifted him here, he felt like he was becoming a porcupine,” his mother told WCPO-TV, adding that he suffered kidney failure from the attack.

On Wednesday evening, Bellamy woke up from a medically induced coma and is expected to make a full recovery, Carter said.

“Austin is still currently in the hospital with breathing problems. His oxygen keeps dropping and he still can’t walk very well, still very wobbly but a lot of the swelling has gone down – a whole heck of a lot,” she said yesterday in an update on an online crowdfunding page set up to help him.
Add Comment