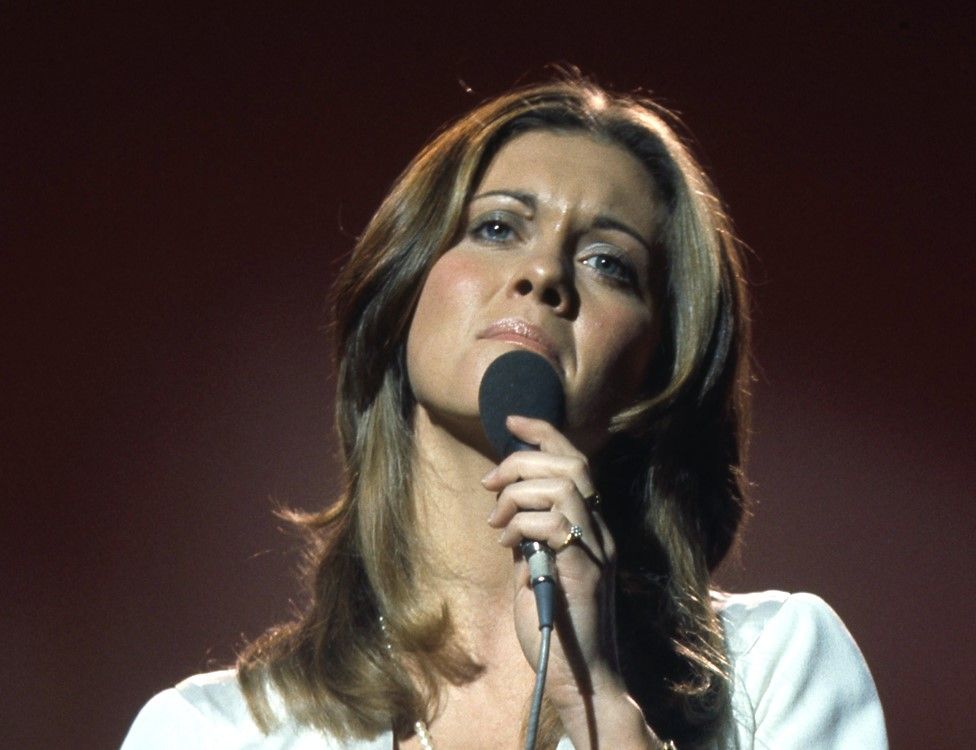 Olivia Newton-John, who has died aged 73, began her career as the sweetheart of country-flavoured pop.

It all changed when she donned black spandex for Grease, one of the most successful film musicals of all time.

Her new raunchy image found its peak in her 1981 album, Physical.

But a diagnosis of breast cancer saw her move to an introspective style and she devoted more time to humanitarian causes.

Olivia Newton-John was born in Cambridge on 26 September 1948. Her Welsh father had been an MI5 agent during World War II attached to the Enigma project at Bletchley Park. 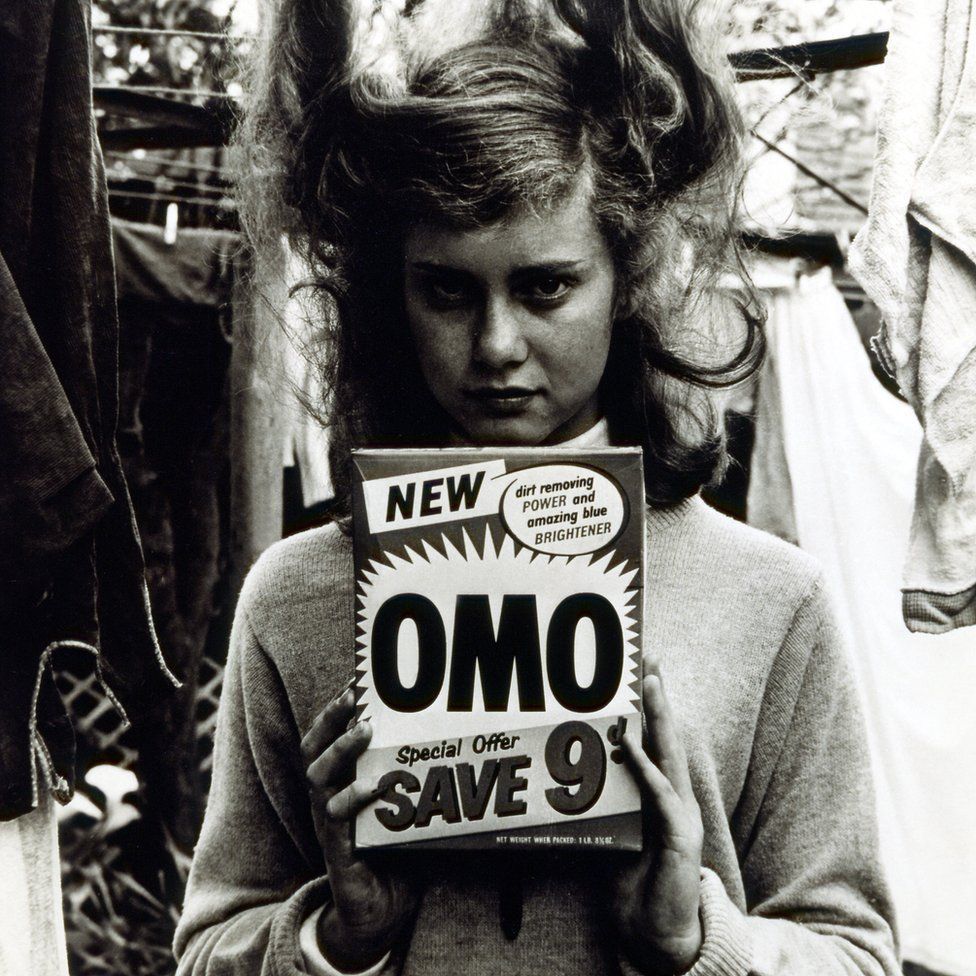 Her mother was the daughter of the German Nobel laureate, Max Born, and had fled with her family when the Nazis came to power in 1933.

In 1954 her father took up a post as a professor of German at the University of Melbourne and the family moved to Australia.

As a child Newton-John had developed a fascination with animals and harboured ambitions to be a vet but she found science a struggle at school and abandoned the idea.

Instead, she turned to music. She formed a short-lived girl group with three school friends and began performing in a coffee shop run by her sister's boyfriend.

A meeting with local singer-songwriter Ian Turpie saw the pair form a professional and romantic relationship.

When Turpie was recruited to present The Go!! Show on ATV 10 in Melbourne, Newton-John became a regular guest, miming to pre-recorded covers of British and US pop hits.

Her rendition of Anyone Who Had a Heart won her the top prize in another talent show, which included a trip to the UK. She was initially reluctant to leave Australia, but her mother saw it as a chance to build her daughter's career and flew with her to London in 1966. 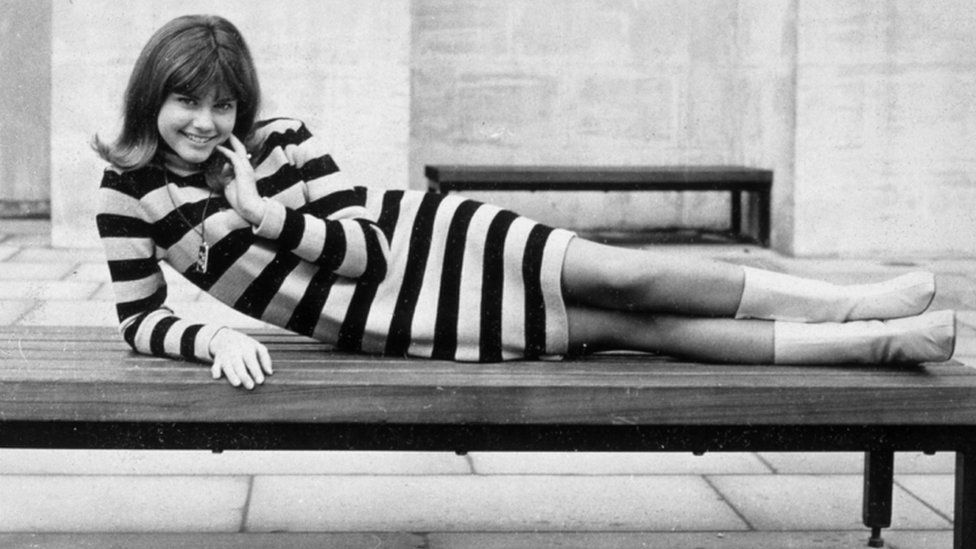 A move to London opened up new possibilities

Appearances in various clubs saw her offered a one-off record deal with Decca but her first single, a cover of 'Till You Say You'll Be Mine, failed to chart.

She teamed up with an old friend from Australia, Pat Carroll, and the two toured Europe as a duo, including a gig at Paul Raymond's Revue which, she later recalled, they hadn't realised was a strip club until they arrived.

Her breakthrough came in 1971 when she released a Bob Dylan-penned track, If Not For You, which reached number seven in the UK charts and featured on an album of the same name.

Another track from the album, Banks of the Ohio, also charted, its country sound heralding the future direction of her music.

There was disappointment when her second album, Olivia, failed to make an impact, although a single, What is Life, made the UK Top 20. 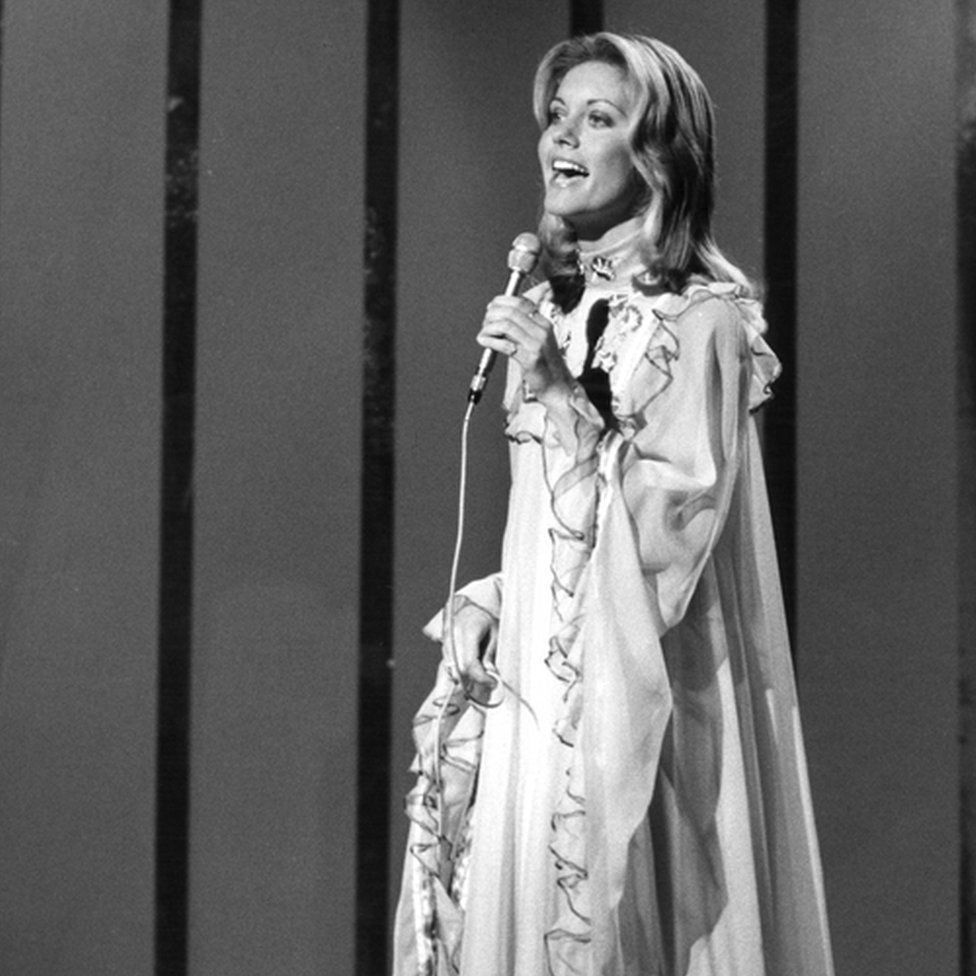 She came fourth in the 1974 Eurovision Song Contest

It was the country-flavoured album Let Me Be There that finally broke her in the lucrative US market. The eponymous single won her a Grammy for Best Female Country Vocalist.

Back in the UK she sang the country's Eurovision entry, Long Live Love, in the 1974 song contest - she came fourth in the year Abba won with Waterloo.

The album If You Love Me, Let Me Know established her credentials across the Atlantic. Released only in the US and Canada, it brought her first US number one single, I Honestly Love You. It was the first of seven US number one hits she would have between 1974 and 1977, either in the Billboard Hot 100 or its Adult Contemporary chart.

In 1974 she was named Country Music Association Female Vocalist of the Year, seeing off competition from Loretta Lynn, Dolly Parton and Tanya Tucker.

There was a backlash from US country fans, annoyed at her pop-style music being considered on a par with Nashville's finest but, with the support of established country stars, she was eventually accepted.

By 1977 her career was faltering. She failed to find chart success with new material although a compilation album, Olivia Newton-John's Greatest Hits, made number seven in the country charts. 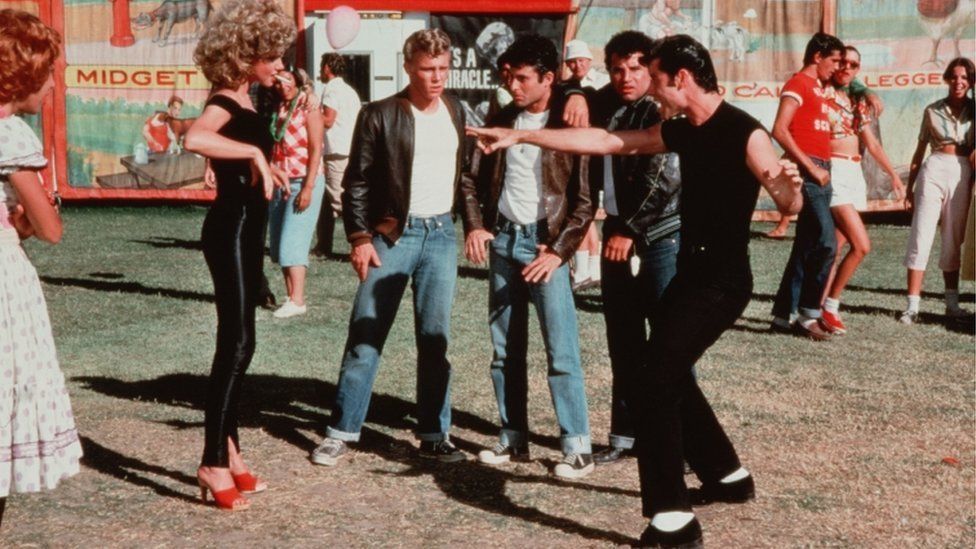 Grease sparked a change in image and musical direction

A meeting with producer Alan Carr saw her offered the part of Sandy in a film version of the musical, Grease.

Worried that at 28 she was too old for the teenage role, she insisted on a screen test with John Travolta before accepting the part. The character of Sandy was recast as an expat Australian to accommodate Newton-John's accent.

The film was the biggest box-office hit of 1978, and gave Newton-John three hit singles, You're The One That I Want, Hopelessly Devoted to You and Summer Nights as well as a Golden Globe nomination for Best Actress.

It was a catalyst for change in both her image and her musical direction. She appeared on the cover of her next album, Totally Hot, dressed in black leather. It was her first US Top 10 album since 1975.

The follow-up, Physical, was her most overtly sexual record, and was hailed by many critics as her best album. The title track held the Billboard number one spot for 10 weeks. 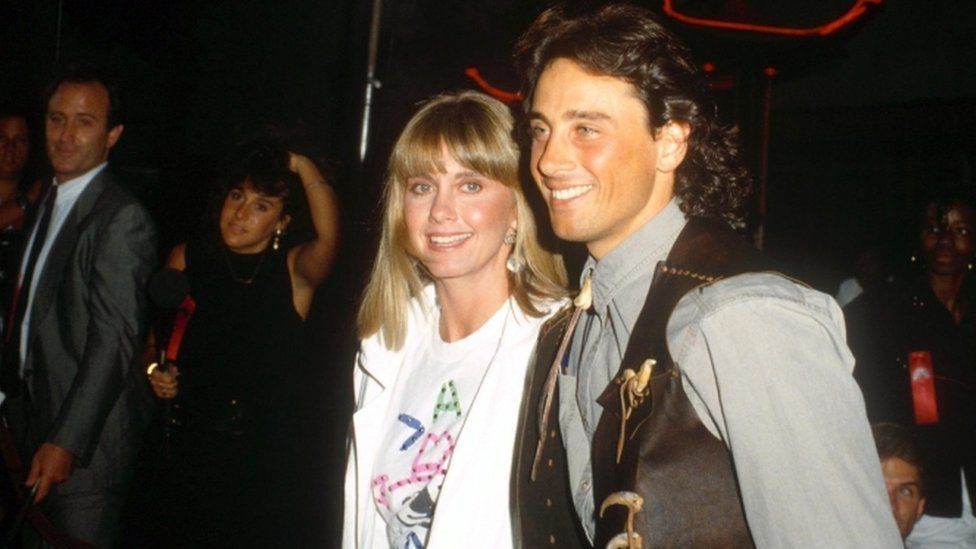 The album was dedicated to her then boyfriend, Matt Lattanzi, whom she married in 1984. The couple had met while filming the rock fantasy - and box-office flop - Xanadu, in which Newton-John had played the lead role.

After taking three years off to raise her daughter, Chloe, she struggled to get her career back on track. There was a further blow when she was diagnosed with breast cancer.

Her illness, and subsequent recovery, marked another change of musical direction as she returned to more mainstream pop material.

She also spent more of her time as an advocate of humanitarian and health issues. She had already established herself as a campaigner for animal welfare, cancelling a tour of Japan in 1978 as a protest against the slaughter of dolphins caught in tuna nets.

She was a supporter of cancer charities, something that led to the opening of the Olivia Newton-John Cancer & Wellness Centre in Melbourne.

She continued to record although many of her subsequent albums were only released in Australia where she performed at the opening of the Sydney Olympics in 2000. 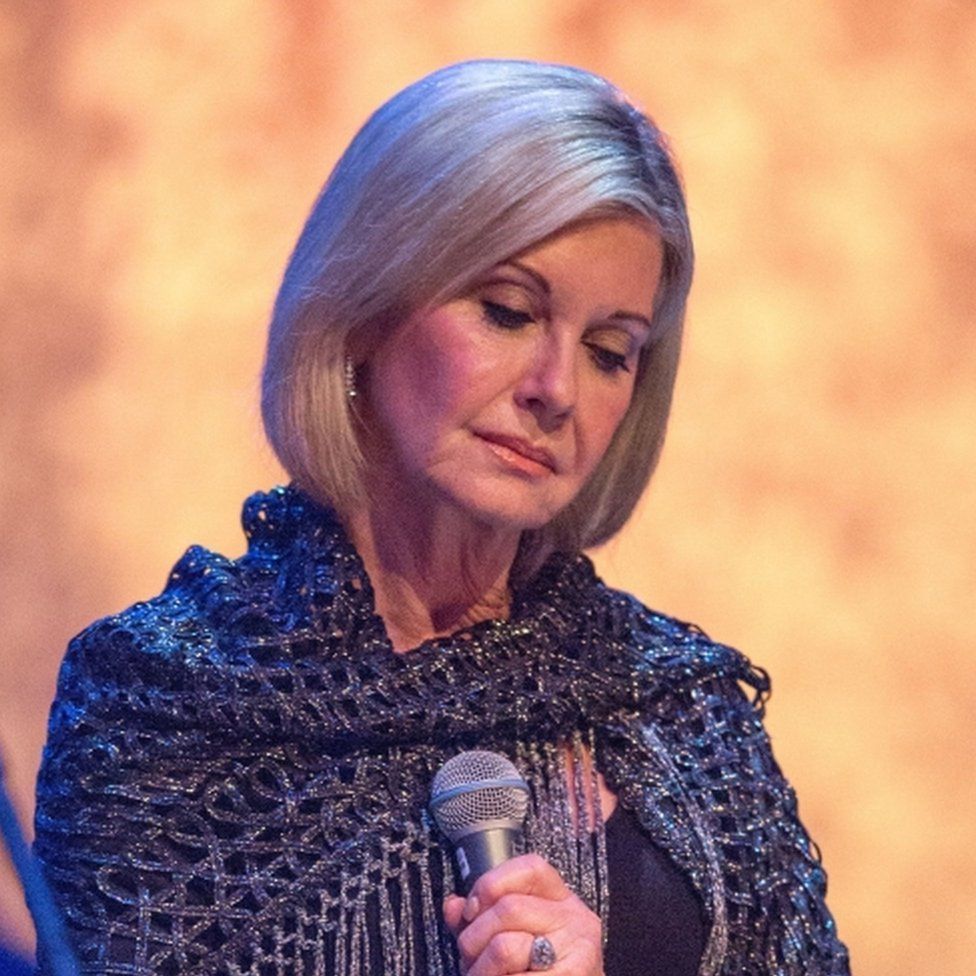 Her longevity came from a process of musical reinvention

In 2008 she secretly married John Easterling, the boss of a natural remedy company, in an Incan spiritual ceremony in Peru.

In May 2017 it was announced that her breast cancer had returned and spread to her back resulting in a cancellation of a planned tour in the US and Canada. She publicly campaigned for the legalisation of medicinal cannabis to ease the pain.

Olivia Newton-John will be remembered for her ability to re-invent herself. The pop princess of the late 1960s morphed first into a country star, got raunchy in Grease, and then glided into an ambassadorial role on behalf of a number of worthy causes.

In 2019 her legendary spandex-pants and leather jacket from Grease were auctioned for $405,000 - as two billionaires fought for the right to own a piece of one of cinema's most famous scenes.

In line with Dame Olivia's wishes, the proceeds were donated to Australian cancer research.