The number of people crossing Panama’s Darien Gap, the notorious and lawless route taken by migrants and refugees trying to head north to the United States, has almost tripled compared with the same period last year, according to the United Nations refugee agency (UNHCR).

In a statement on Tuesday, UNHCR said 8,456 people crossed the dangerous jungle area between Colombia and Panama in the two first months of this year, compared with 2,928 in the first two months of 2021.

The Darien Gap, a stretch of mountainous jungle 160km (100 miles) long and 50km (30 miles) wide, is controlled by criminal groups known for acts of violence, including sexual abuse and robbery. To cross, migrants also must tackle natural hazards.

“Many of those who make the crossing – usually young adults and families – arrive in remote Indigenous communities, hungry, dehydrated, exhausted and in need of medical attention,” UNHCR’s statement read.

“Refugees and migrants of various nationalities have been crossing the Darien Gap for years,” it added. “However, 2021 marked a record in the number of people who risked their lives through the dense jungle separating South and Central America.”

The new figures come as the administration of United States President Joe Biden nears a decision on whether to end the use of Title 42, a border rule imposed along the US-Mexico border that allows US authorities to quickly expel asylum seekers back to Mexico, or their country of origin.

The rule, first imposed in March 2020 by then-President Donald Trump citing the need to prevent the spread of COVID-19, has been used in more than 1.7 million expulsions since it was first invoked.

But amid a drop in coronavirus infections across the US, and the reversal of most pandemic-era restrictions, the Biden administration has been under increased pressure to revoke Title 42. The US Centers for Disease Control and Prevention (CDC) is expected to decide this week whether to extend the order.

The large majority were from Haiti – including Haitian children born in Chile and Brazil – followed by Cubans, Venezuelans and those from counties outside Latin America such as Angola, Bangladesh, Ghana, Uzbekistan and Senegal. The majority were on the move due to the socioeconomic impacts of the COVID-19 pandemic, the UNHCR said. 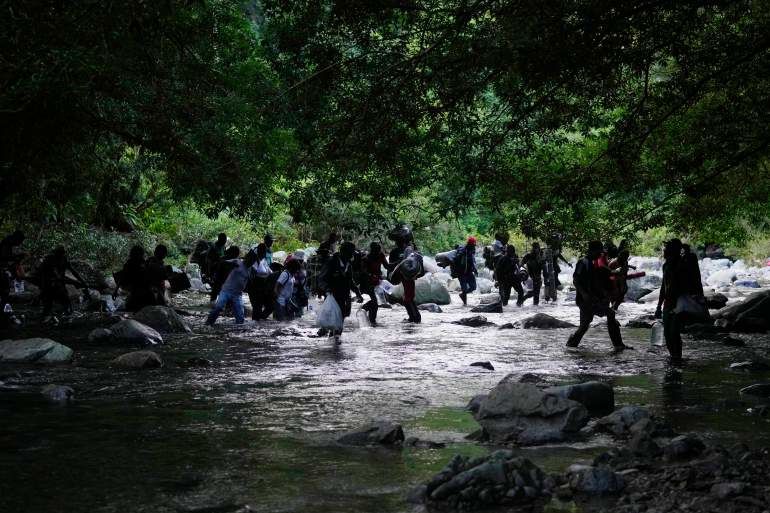 According to the UNHCR, at least 51 people who entered the Darien Gap were reported missing or dead in 2021 alone

In 2021 alone, at least 51 people who entered the Darien Gap were reported missing or dead, the UN agency also said.

It added that while many of the Venezuelans who are crossing had previously been living in other host countries in South America, an increasing number are now leaving directly from Venezuela.

According to statistics from Panamanian authorities, the number of Venezuelans crossing the Darien Gap in the first two months of 2022 – approximately 2,500 people – has almost reached the entire total for 2021, which saw 2,819 Venezuelans go through the jungle pass.

Meanwhile, about 7,000 migrants are being stopped crossing the US-Mexico border daily, US Border Patrol chief Raul Ortiz said on Tuesday, a sharp increase from February.