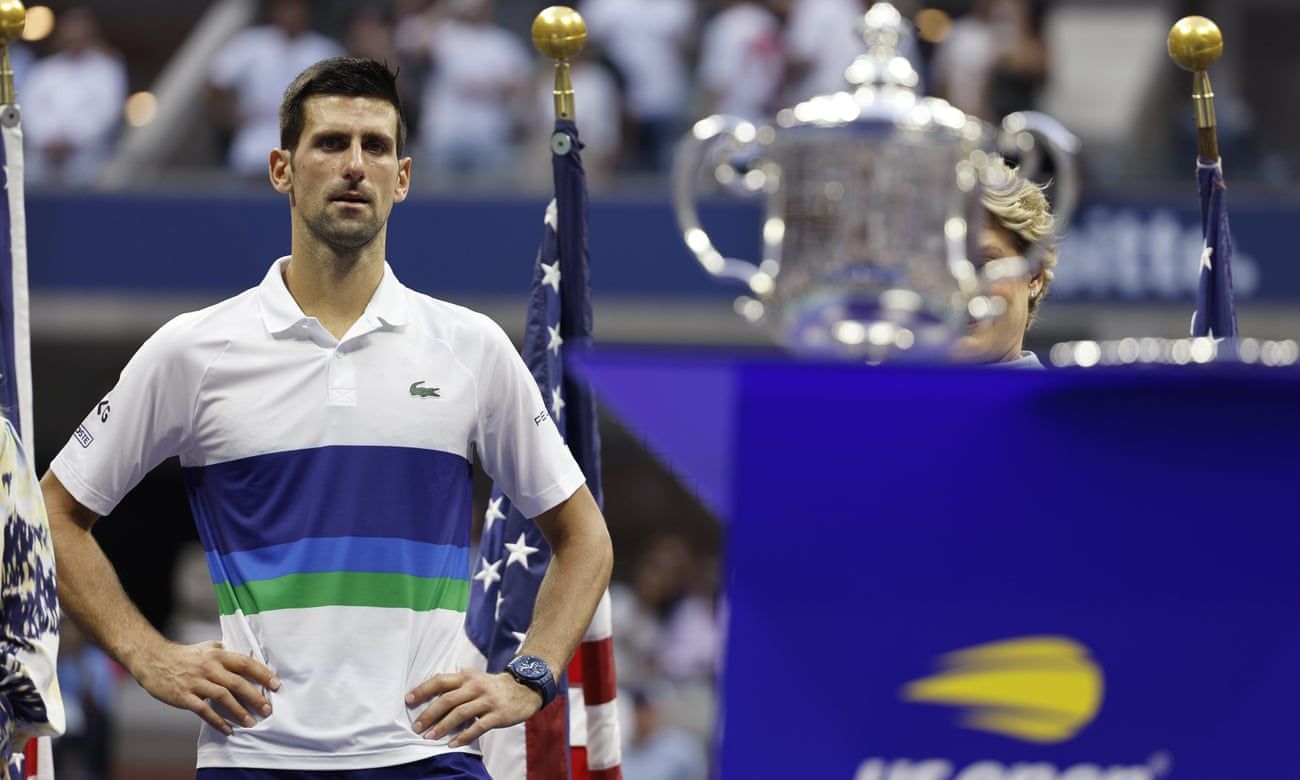 The three-time champion at Flushing Meadows is forbidden from entering the US. Many conservatives have used him to push their agenda

As the US Open got underway this week, one of the more controversial aspects of the event was Novak Djokovic’s absence.

The three-time US Open champion was prevented from participating at the final grand slam of the year due to his decision not to get vaccinated against Covid-19. The United States requires non-citizens to be fully vaccinated against the coronavirus to enter the country, meaning that Djokovic could not travel to New York.

The 35-year-old, whose vaccine status also meant he missed out on the Australian Open in January, announced his withdrawal from the US Open last week, adding that he plans to “keep in good shape and positive spirit and wait for an opportunity to compete again.”

Djokovic has received significant backing from some in the tennis world, including John McEnroe, who referred to the ban as a “joke”. Djokovic’s longtime rival Rafael Nadal called the Serb’s absence “very sad news”, while defending US Open champion Daniil Medvedev questioned the law that kept Djokovic from entering the country.

Most notable, however, are the conservative politicians who threw their support behind Djokovic in an attempt to criticize the US government’s Covid-19 mitigation efforts. For example, Florida’s governor, Ron DeSantis, a vocal opponent of Covid-19 mandates and regulations, was quick to call Djokovic’s exclusion “stupid.”

“They’re not letting Djokovic come to the United States to play in the US Open because of the shot! He’s already had Covid,” DeSantis said. “And the shot is not stopping you from getting this. It’s so bizarre. It’s so stupid that they’re doing this, but you had a lot of these bizarre policies going on in these other states.”

Shortly thereafter, Republican congresswoman Claudia Tenney announced on Twitter that she planned to boycott the US Open after Djokovic was “wrongly denied” access. Richard Grenell, a member of Donald Trump’s Cabinet in 2020, tweeted that “the US Open cheapens itself when it bans one of the best players in the world” – a statement echoed by Wisconsin senator Ron Johnson, who called the ban “idiotic, pointless, and destructive.”

“I believe that our country’s response to Covid is the biggest failure of American public policy since the Vietnam War,” Travis wrote. “Remember, after all, it was the best and brightest in our country, the experts of their day, who all told us that fighting in Vietnam was a necessity. But all those experts, with all their fancy degrees and brilliant training, got it wrong. And the Muhammad Alis, the non-experts and the regular people speaking out against the war, got it right.”

The conservative support for Djokovic is unsurprising given rightwing opposition to vaccine mandates in the US. Such mandates invoke debates about personal autonomy and government oversight, which are important topics for conservative voters. Consequently, many Republicans have voiced their objections to vaccines, masks and other mitigation efforts, such as social distancing or travel regulations. A handful of Republican governors filed lawsuits in an attempt to stop the Biden administration from enforcing Covid-19 vaccine mandates, while other figures on the right promoted unproven treatments, including the antiparasitic drug Ivermectin.

Many of the conservative politicians, pundits, and activists who opted to side with Djokovic have done so to serve their own political interests. But there is a case to be made that banning unvaccinated visitors from the United States is overly draconian – most countries in Europe do not have such restrictions – and that the policy has merely elevated Djokovic’s status among anti-vaxx sympathizers. It is also worth noting that Djokovic was allowed to participate in last year’s US Open, where he reached the final. If he wasn’t a danger then, why is he now?

This is not to suggest that Djokovic is correct in his stance. Djokovic insists he is not against vaccines, just that he chooses not to get one himself. And perhaps that is fine if you’re an athlete in peak physical condition. But he is also a hugely influential figure, and vaccines have been proven to reduce death and hospitalizations due to Covid. How many of his fans have followed their hero’s lead, passed up the vaccine and suffered the consequences? And let’s remember that this is an athlete who, during the height of the pandemic in 2020, organized a tournament that resulted in several players testing positive for Covid.

Yet, in spite of his inept handling of the pandemic over the past couple of years, Djokovic has emerged as a symbol of resistance for conservative politicians looking to score points with their constituents, pundits eager to lambast the government for perceived failings, and anti-vaxxers desperate to have their pseudo-science worldview validated on a global stage.