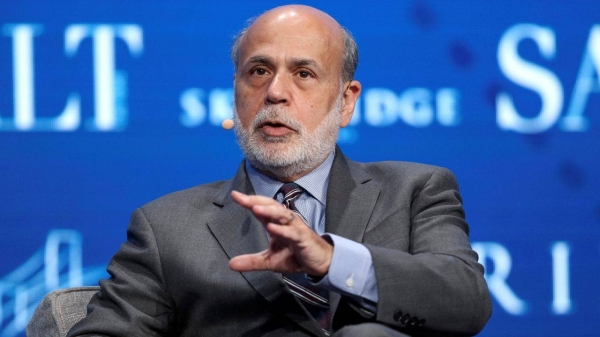 Former Federal Reserve Chair Ben Bernanke, Douglas Diamond and Philip Dybvig were awarded the Nobel Prize in economics on Monday for their work on banks and financial crises.
The three US economists were recognized by the Royal Swedish Academy of Sciences for their work in the early 1980s, which the institute said provided the foundation for our modern understanding of why banks are needed, their chief vulnerabilities and how their collapse can fuel financial meltdowns.

Bernanke, who led the US central bank during the 2008 global financial crisis, received the award for his research on the Great Depression. His work showed that bank runs were a decisive reason the crisis became so severe and entrenched.

“People had seen that banks fail, but it was more thought [of] as a consequence of the crisis rather than [a] cause of the crisis,” the economist John Hassler, who serves on the Nobel committee, said at a press conference. “Now the views of Bernanke have become the conventional wisdom.”

Diamond and Dybvig’s research showed that banks help resolve tensions between borrowers and savers, whose goals can diverge. Borrowers want to know they won’t have to repay their debts too soon, while savers desire quick access to funds in case of an emergency. While this intermediary role is important, it also makes lenders vulnerable to runs if rumors about their financial position start to circulate, Diamond and Dybvig found.

Answering questions at the press conference on Monday, Diamond noted that the rapid run-up in interest rates around the world was causing market instability, pointing to the recent tumult in the United Kingdom.

But he believes the system is more resilient than it used to be because of hard lessons gleaned from the 2008 crash.

“Recent memories of that crisis and improvements in regulatory policies around the world have left the system much, much less vulnerable,” Diamond said.

Bernanke, who was in charge of the Fed from 2006 to 2014, played a key role in managing fallout during that period.

While Bernanke served as chair, the central bank pioneered a program of quantitative easing, buying up assets to help stimulate economic growth.

He also improved communication with the public about the central bank’s thinking and intentions. These approaches are now a standard part of the Fed’s playbook to stabilize markets and prop up the economy.

The failure of the Fed and US Treasury to save Lehman Brothers from collapse, however, has been the subject of significant debate. The investment bank’s implosion in September 2008 is seen as a tipping point in the crisis.

“There’s a lot of question on ... the legal ways the US regulators could have resolved Lehman, and some claim it was essentially impossible for them to do it,” Diamond said on Monday. “But had they found a way I think the world would have had less of a severe crisis than it did.”

Bernanke is now a distinguished senior fellow at the Brookings Institution, a high-profile think tank. Diamond is a professor at the University of Chicago, while Dybvig is at Washington University in St. Louis.

The Nobel prize, officially known as the Sveriges Riksbank Prize in Economic Sciences, comes with an award of 10 million Swedish kronor ($885,370) to be split equally among the laureates.

It was not instituted by Alfred Nobel, but established by Sweden’s central bank and awarded in memory of Nobel.
Add Comment