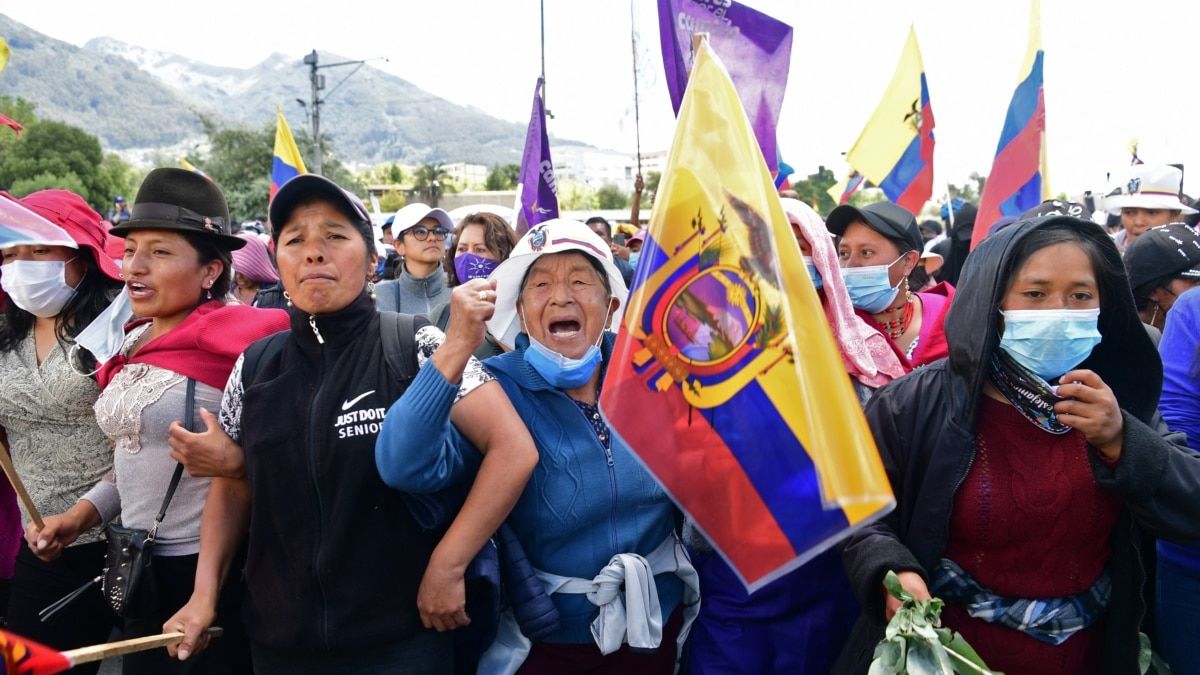 Ecuador's National Assembly suspended early Sunday a no-confidence hearing for President Guillermo , after eight hours of acrimonious deliberations by lawmakers over his responsibility for nationwide protests against rising fuel and living costs.
Opposition lawmakers had called the parliamentary session over what they say is Lasso's role in "the serious political crisis and internal commotion" that have left five people dead and dozens injured in 13 days of revolt.

The Assembly will vote on whether to oust the conservative ex-banker who took power a year ago, and who is self-isolating after a Covid-19 diagnosis.

But after nearly eight hours of debate, parliament president Virgilio Saquicela called for the session to be reconvened on Sunday afternoon.

"I proceed to suspend the present session and convene it for its continuation on Sunday at 4:00 pm (2100 GMT)," he said.
The debate was at the request of the 47 opposition lawmakers in the leftist Union for Hope coalition.

Lasso's dismissal would require 92 votes out of 137 in the assembly, in which opposition parties are in the majority. The body's Twitter account said 135 out of those 137 lawmakers are taking part.

Once the debate is concluded, legislators will have 72 hours to decide on a course of action.

The attempted ousting comes as an estimated 14,000 protesters are taking part in a nationwide show of discontent against rising hardship in an economy dealt a serious blow by the coronavirus pandemic.

Most of the ire is concentrated in the capital Quito, where about 10,000 people have gathered for daily protests, marching with sticks and makeshift shields, and chanting "Out Lasso, out!"

Shortly after the debate began, Lasso lifted a state of emergency that had been in force in six provinces over the protests.

Indigenous leaders and government representatives held a first meeting on Saturday in Quito, with a view to beginning a dialogue, according to parliament president Saquicela.

'Until we have results' - On Friday, Lasso accused demonstrators of attempting "a coup" after two straight days of violent clashes with police and soldiers.

Protesters in Quito threw rocks and Molotov cocktails and shot off fireworks near the congress building. The security forces repelled them with tear gas.

The protests were called by the powerful Confederation of Indigenous Nationalities of Ecuador (Conaie), credited with bringing down three presidents between 1997 and 2005.

Conaie leader Leonidas Iza told AFP this week demonstrations would continue "until we have results."

"We can no longer hold back the anger of the people," he said.

The action has been costly, with losses of about $50 million per day to the economy as protesters have blocked key roads with burning tires and tree branches.

Production of fuel -- Ecuador's biggest export -- has been halved, according to the energy ministry.

"Basic necessities are very expensive and our products from the field... are worth nothing," potato farmer Miguel Taday, 39, told AFP of his reason for joining the demonstrations.

Protesters are demanding a cut in already subsidized fuel prices, which have risen sharply in recent months, as well as jobs, food price controls, and more public spending on healthcare and education.

The government has rejected the protesters' demand for a fuel price cut, saying it would cost an unaffordable $1 billion per year.

The International Monetary Fund on Friday approved the release of $1 billion in funding for Ecuador following two reviews of a $6.5 billion loan deal, of which $4.8 billion has been disbursed so far.

The payment is meant to bolster Ecuador's economic recovery from the Covid-19 pandemic, restore fiscal sustainability and reduce public debt.