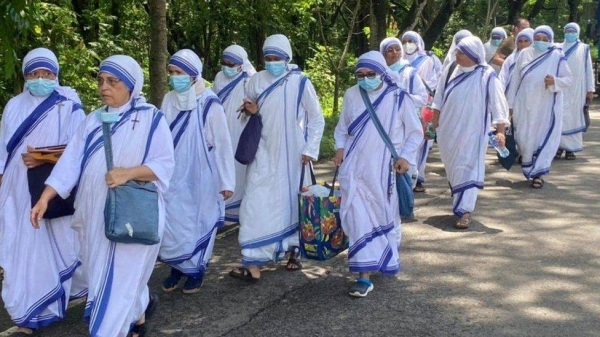 Nuns from the order founded by Mother Teresa have left Nicaragua after their organization was stripped of its legal status.
They were escorted by police to the border and crossed into neighboring Costa Rica on foot.

Their organization is among the latest to be shut down as part of a crackdown on anyone deemed to oppose President Daniel Ortega.

The Catholic Church has been outspoken about human rights abuses in Nicaragua.

Local media said 18 nuns from the Missionaries of Charity were driven to the border in a bus escorted by migration officials and police officers.

The group had been stripped of its legal status on 28 June by the Nicaraguan parliament, where members of President Ortega 's Sandinista party are in the majority.

The nuns had been working with the poor in Nicaragua since 1988 and ran a children's nursery, a home for abused and abandoned girls and a nursing home.

A government department which oversees non-governmental organizations accused it of "not meeting its obligations" to declare the provenance of its funds.

More than 200 organizations have been shut down in Nicaragua since 2018 for allegedly breaching with strict new laws about funding.

Among those closed down is the renowned Nicaraguan Academy of Language as well as a medical charity providing surgeries for children with cleft palates.

Tension between the government of Daniel Ortega and the Catholic Church has been high ever since clergy sheltered students protesting against President Ortega during a wave of anti-government protests in 2018.

And more recently, in March, the government expelled the Apostolic Nuncio - the Catholic Church's equivalent to an ambassador - in a move the Vatican called an "unjustified unilateral measure".

President Ortega himself has accused Catholic clergy of being "coup mongers" and called them "devils in cassocks".

The 76-year-old is in his fourth consecutive term in office after winning a 2021 presidential election widely denounced as a sham.
#Costa Rica
Add Comment