A US gymnast's routine celebrating "black excellence" has gone viral, with millions of views on social media. 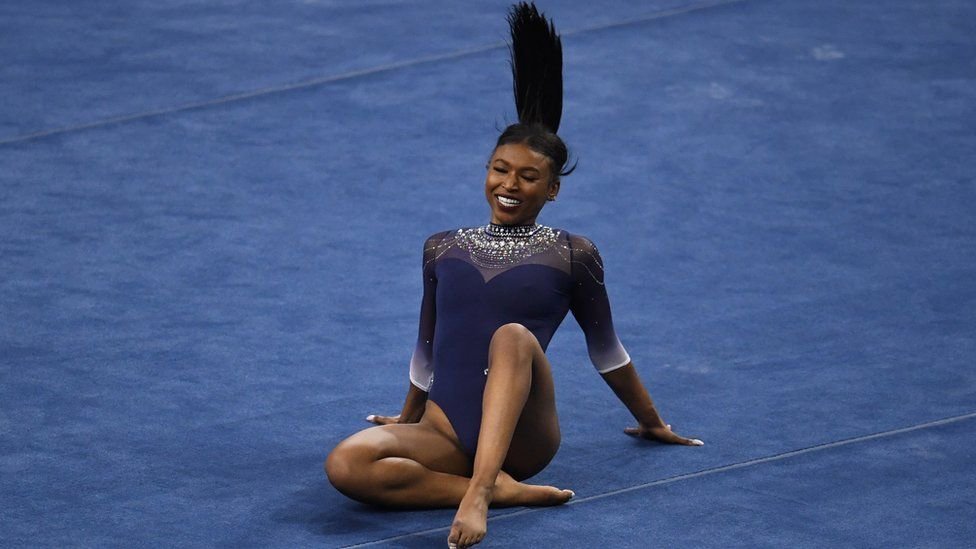 The floor routine by Nia Dennis, an athlete at the University of California in Los Angeles (UCLA), incorporated songs by artists including Kendrick Lamar, Beyoncé and Missy Elliott.

She said Black Lives Matter protests inspired the performance, which saw her kneel with her fist in the air.

The routine wowed the judges and earned her praise from celebrities, fellow athletes and fans.

A video shared by UCLA Gymnastics was viewed more than nine million times.

Dennis told Washington Post publication The Lily that she wanted the routine to "be a celebration of everything [black people] can do, everything we can overcome".

"The subject of Black Lives Matter is so heavy. It is difficult for people to talk about - and sometimes you have to meet people where they're at, with a celebration," she said of the performance.

Sporting stars across the world took the knee in solidarity with the Black Lives Matter movement last year, after African-American man George Floyd was killed when a white police officer knelt on his neck.

The fist salute was used in the 1960s and 70s as a symbol of the Black Power movement and the struggle for civil rights. NFL player Colin Kaepernick started kneeling symbolically during the pre-game national anthem in 2016, in protest at oppression of African-Americans in the US.

Dennis said she was not able to attend the BLM protests last summer because she was recovering from shoulder surgery but was "definitely out there in spirit".

The judges awarded her a score of 9.95 out of 10 for the performance on Saturday, helping her team to victory against Arizona State.

US rapper Missy Elliott was among those to show her approval, sharing the video on social media and tweeting: "Snappin".

Former US First Lady Michelle Obama wrote: "Now that's what I call fierce! You're a star."

It is the second time Dennis has gone viral for her gymnastics. Last year, she made headlines for a routine set to a medley of Beyoncé songs.