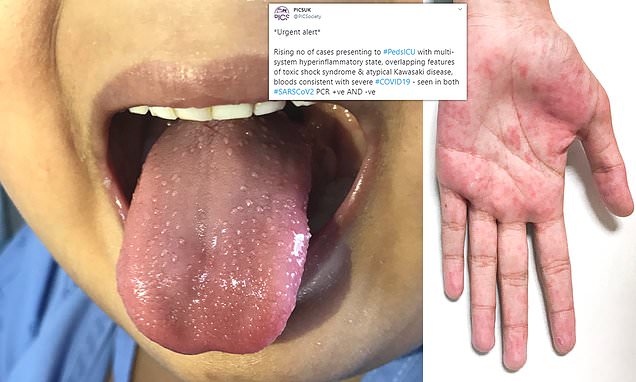 In an alert sent to GPs, health chiefs at an NHS board in London said: 'There is growing concern that a [COVID-19] related inflammatory syndrome is emerging in children in the UK.

'Over the last three weeks there has been an apparent rise in the number of children of all ages presenting with a multi-system inflammatory state requiring intensive care across London and also in other regions of the UK.'

Children are not thought to be badly affected by COVID-19 - very few youngsters have died around the world since the pandemic began in December. Their apparent resilience to the disease has baffled doctors for weeks because they are often 'super-spreaders' of viral illnesses such as flu.

The children being seen with the syndrome often suffer from stomach pain, cardiac inflammation and 'gastrointestinal symptoms' - which could include vomiting and diarrhoea.

Doctors have compared the mysterious complication to toxic shock syndrome and Kawasaki disease which, combined, cause harmful internal swelling, fever and breathing problems - all hallmark signs of COVID-19.

But some of the children needing intensive care have tested negative for the coronavirus, further complicating the diagnosis and raising questions that another pathogen could be behind the condition.

Officials have yet to offer any clarity on what the symptoms are, despite pleas from paediatricians to paint a clearer picture so they can remain vigilant.

It is not clear how many children have had the inflammatory syndrome, nor whether any have died with it. It is also unclear as to how old children are who are being struck down, or if there are any clusters of cases in the UK.

But it is thought to have only affected a 'handful' of children so far, according to one prominent paediatrician who admitted the complication could be caused by another pathogen.

It comes amid reports that schools could begin reopening in June under plans for a ‘cautious’ easing of lockdown restrictions.
#COVID-19  #Covid  #Coronavirus
Add Comment