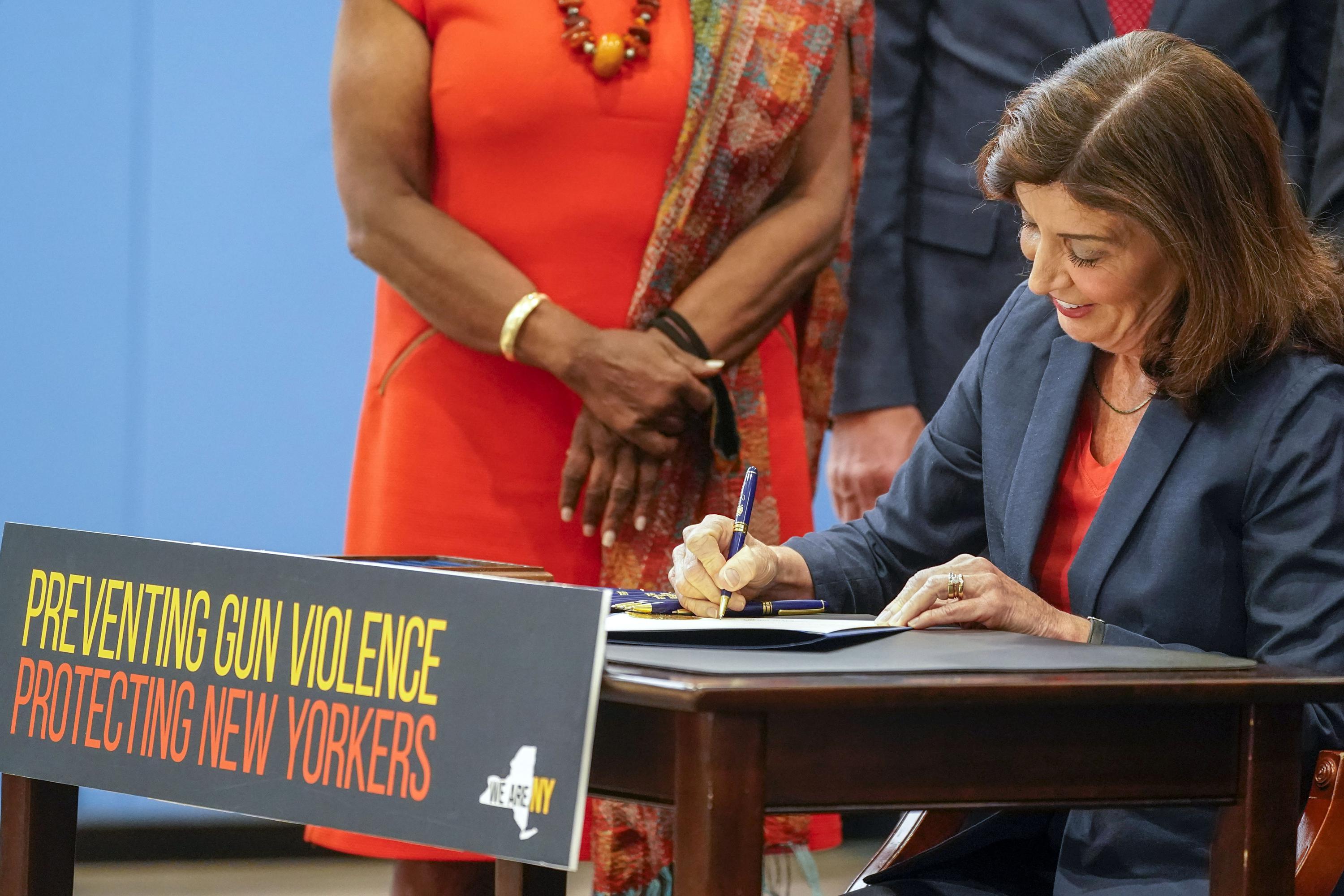 New York governor: State to limit where guns can be carried

New York will ban people from carrying firearms into many places of business unless the owners put up a sign explicitly saying guns are welcome, Gov. Kathy Hochul said Wednesday.
The Democrat said she and legislative leaders have agreed on the broad strokes of a gun control bill that is poised to pass as soon as Thursday, just days after the U.S. Supreme Court struck down the state’s handgun licensing law.

Because of the court’s ruling, ordinary New Yorkers will, for the first time in more than a century, be able to get a license to carry a gun outside the home for personal defense. Previously, it was hard to get an unrestricted handgun license unless you worked in law enforcement or security.

But Hochul said she also wanted to protect the rights of property owners who decide they don’t want firearms on the premises.

Businesses that want guns around would have to put up a sign reading, “Concealed weapons welcome here,” or words to that effect, Hochul said. “Otherwise the presumption will be in the state of New York that they are not.”

“We’re going to protect the rights of private property owners allow them to not have to be subjected to someone walking into their workplace or a bar, restaurant with a concealed weapon,” Hochul said.

Gun rights groups bristled at the idea that firearms could be banned from many places by default.

“She’s telling business owners how they need to conduct their business if they want to stay open. These are unconstitutional mandates, and I think it’ll be struck down by the courts,” said Aaron Dorr, the executive director of the New York State Firearms Association.

The push to pass new restrictions follows the Supreme Court’s decision striking down a provision in New York’s licensing law which required people to show an unusual threat to their safety to carry a handgun.

The state is setting new requirements for getting a handgun permit, Hochul said, including mandating 15 hours of in-person fire range training. The legislature will also enact new rules around firearm storage in homes and vehicles, she said.

Hochul and fellow Democrats also plan on creating a comprehensive list of “sensitive places” where the average citizen will be banned entirely from carrying firearms, including government buildings, hospitals, schools and public transit.

A handful of states, including California, are considering similar steps to revise gun control measures after the Supreme Court ruling.

New York would be the first state to pass a law to allow concealed weapons only in businesses that explicitly allow it, according to David Pucino, deputy chief counsel for Giffords Law Center to Prevent Gun Violence.

In many states where carrying guns is common, the onus is usually on businesses to post signs saying firearms aren’t allowed. Some states, including Louisiana and South Carolina, require people to get permission to bring firearms into private dwellings.

“The state is responding in a very strong way to address the new risks created by the court, but in a way that fits into the framework the court has put forward about what a constitutional set of gun laws look like,” Pucino said.

The Supreme Court ruling said states could ban firearms in particular locations but warned it would be unconstitutional to simply ban guns in all densely populated areas.

Hochul said she is still working with lawmakers to hammer out specifics of the gun control legislation, including on her proposal to bar people with a history of dangerous behavior from getting handgun permits.

Lawmakers will also require background checks for all purchases of ammunition for guns that require a permit, Hochul said.

That’s something already required in several states, and a 2013 state law also would have required such checks in New York once the state set up a database. But legislative leaders and former Gov. Andrew Cuomo agreed in 2015 to halt work on that database.

“No criminal is going to walk into a retail store to purchase ammunition,” Dorr said. “This is an absurd attempt to demonize law abiding gun owners one more time.”
Add Comment