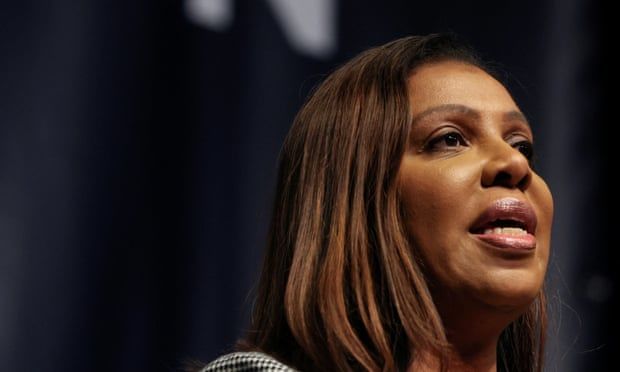 State attorney general Letitia James says her office has every right to question Trump and his two oldest children over possible fraud
The attorney general of New York state is asking an appeals court to uphold a lower-court ruling requiring Donald Trump to answer questions under oath, after a civil investigation uncovered evidence he may have misstated the value of assets like golf courses and skyscrapers on financial statements for more than a decade.

In papers filed late on Monday, the office of Letitia James said it had every right to question Trump, who is appealing against the lower-court ruling, as it seeks to determine whether the misrepresented values shown to lenders, taxing authorities and other business interests constituted fraud and, if so, who committed that fraud.

James is also seeking to uphold a ruling forcing Trump’s two oldest children, Ivanka and Donald Trump Jr, to testify. Both have been executives at the Trump Organization.

CNBC reported that one “glaring example” of such practices mentioned in the filing saw “financial statements for the Trump Organization from 2010 to 2012 ‘collectively value’ rent-stabilized apartment units it owned at $49.59m, which was ‘over 66 times the $750,000 total value the outside appraiser had assigned to these units’.”

“These misrepresentations appear to have been aimed at portraying Mr Trump’s net worth and liquidity as higher than the true facts warranted, to secure economic benefits to which Mr Trump might not otherwise have been entitled.”

In its response, James’s office rejected the Trumps’ arguments that the attorney general, a Democrat, had a political vendetta against Trump, a Republican, or that requiring the Trumps to testify under oath would violate their constitutional rights because their answers could be used against them in a parallel criminal investigation.

While upholding the subpoenas would require the Trumps to sit for questioning, they cannot be forced to provide information that could be used against them in a future criminal case, James’s office said, and are free to exercise their fifth amendment right against self-incrimination – as another Trump son, Eric Trump, did more than 500 times during a 2020 deposition in the civil investigation.

Lawyers for the Trumps want the appellate division of the state’s trial court to overturn Engoron’s 17 February ruling and invalidate James’s subpoenas seeking their testimony.

The Trumps and James’s office have agreed to pause enforcement of the subpoenas during the appeals process. Court papers indicate the appellate court will probably hear arguments in May or June.

On Monday, in a related matter, Engoron ordered weekly progress reports from a digital forensics company the Trump Organization hired to provide evidence to James’s office, which had raised concerns that the process was playing out slower than expected.

The company must turn over all requested evidence by 22 April, the judge said.
#Donald Trump
Add Comment