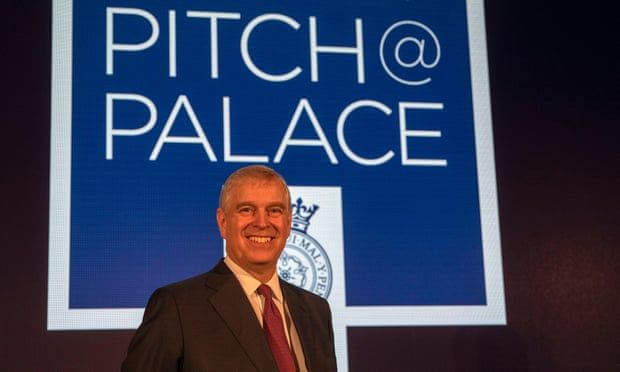 Selman Turk, a Turkish businessman, received an award in November 2019 from the Duke of York at a Pitch@Palace event during which 40 entrepreneurs gave rapid-fire pitches in a room full of potential investors.

Turk won the “People’s Choice” award for his business Heyman AI, a digital bank aimed at millennials, which later went bust. His victory was decided by a public vote online and an audience vote on the night.

The Guardian has learned that the day after the event, concerns were raised with Amanda Thirsk, then a senior member of the royal household, who said she would look into suggestions that entrepreneurs could game the system.

In an exchange with Thirsk, seen by this newspaper, she was told Heyman AI’s win “did not feel right or make sense”, adding “it would be [a] shame if people were gaming the system”.

Thirsk replied: “I also think your point is right that a campaign to ‘game’ the position is not quite in keeping … we will certainly look at this again for next time.”

A number of participants have told the Guardian they found Turk’s Pitch@Palace win unusual as he “won it by miles” and his pitch was “crap”, with some suspecting he may have used bots – autonomous internet programs – to boost his vote. In his live pitch, available to watch online, Turk forgets his words and before he can finish, he is cut off by the trumpets of the duke’s grenadiers.

Turk, Pitch@Palace representatives and Thirsk have been approached for comment.

It has since been alleged in court documents that Turk instructed a Turkish millionaire, 77-year-old Nebahat Isbilen, to pay Andrew £750,000 nine days after the Pitch@Palace event, and the duke is also said to have received payments of up to £350,000 from a company linked to Turk.

Details of the payments, which the duke has declined to comment on, emerged last week for the first time in a case Isbilen launched against Turk in the high court, alleging he defrauded her to the tune of £40m. Turk denies the allegations.

Since the legal proceedings against Turk emerged, it has been reported that the businessman first met Andrew between May and June 2019 at Windsor Castle – about six months before the Pitch@Palace event.

A source familiar with the event said they believed Turk received as many as 10,000 votes, whereas some other participants polled closer to the hundreds. One of the 2019 participants told the Guardian: “There was a group of us on the day that felt the People’s Choice award hadn’t felt right during that competition.

“Because their pitch was crap … Their whole concept was bizarre in that they were pitching for something when they didn’t have a licence. There was a group of us who felt it didn’t [seem] right that they had won the People’s Choice because they won it by miles.

“A few of us made the assumption, rightly or wrongly, that we thought … bots [must have been used] to do this because the way the awards worked was you were actively told to go on your network and get people to vote for you.”

“We watched all the pitches and Heyman AI didn’t stand out. Further, there seemed to be some more impactful companies that the typical member of the public would be drawn to, that is, those actually helping people as opposed to a new banking app.

“I think our thoughts were that they had mobilised more friends and family/social media followers. It was very much an innocent ‘I wonder how they did that?’ as opposed to assuming anything malevolent. We weren’t expecting to win, but at least we thought it was set up as a fair contest.”

It was reported that Turk met Andrew in London on at least two occasions after the Pitch@Palace event, including at a dinner with potential investors at Turk’s apartment in South Kensington on 5 December 2019, and in February 2020 at Frogmore House, the royal residence in Windsor Great Park.

Turk has admitted in his defence statement, provided to the court and seen by the Guardian, that he held meetings with Andrew at his flat in September 2019 – two months before the Pitch@Palace event. But he claims he did not instruct Isbilen to pay Andrew £750,000 and she did so on her own initiative.

Lawyers for Isbilen have been asked to confirm whether or not it is her case that she knew Andrew.
Add Comment