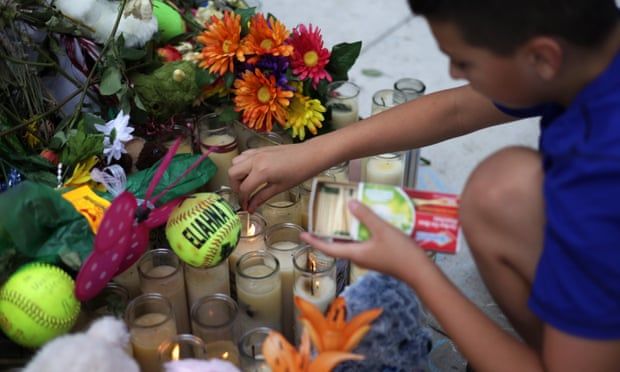 Nearly half of Republicans think US has to live with mass shootings, poll finds

CBS and YouGov poll returned familiar results, including 62% support for a nationwide ban on semi-automatic rifles
Nearly half of Republican voters think the US just has to live with mass shootings, according to a poll released in the aftermath of the Texas elementary school murders and as politicians in Washington negotiate for gun reform.

The CBS and YouGov poll returned familiar results, including 62% support for a nationwide ban on semi-automatic rifles, the kind of gun used in Uvalde, Texas.

Nineteen young children and two adults were killed at Robb elementary school on 24 May by an 18-year-old who bought his weapon legally.

But clear national support for a ban on such rifles or changes to purchasing ages and background checks is not mirrored in Congress. Most Republicans, supported financially by the powerful gun lobby, remain opposed to gun reform.

In an effort fueled by horror at events in Uvalde, senators led by Chris Murphy, a Democrat from Connecticut elected after the Sandy Hook elementary school shooting killed 26 in 2012, and John Cornyn, a Texas Republican, have expressed optimism that some changes may be possible.

On Monday, Murphy told NBC News: “Sometimes when we go away for a week … sensitive negotiations like this fall apart. This week, the opposite is happening because my colleagues went home and heard the same thing I did. Parents are frightened to death.

Reporting on the Senate talks has largely focused on “red flag” laws designed to stop gun purchases by people deemed a potential danger to others or themselves. In the CBS/YouGov poll, support for such laws ran at 72%.

Murphy was asked: “Is this about incentivising states to pass their own [red flag law] or a federal one?”

He said: “I actually don’t think it’d be a good idea to have a federal red flag law. I think it’d be very inaccessible for local law enforcement to have to go to the federal court system.

“So I support the state laws. I think they need some guidance and some funding in order to implement these laws and make sure that everybody knows how to access them.”

Murphy said: “I think there’s certainly Republican support for raising the age. I don’t know whether there are 60 votes yet and right now, my entire focus is on what can get 60 votes.”

But the new poll’s most telling evidence came when respondents were asked if mass shootings were “unfortunately something we have to accept as part of a free society” or “something we can prevent and stop if we really tried”.

Among Democrats, 85% said mass shootings could be stopped if US politicians would only try. Among independents, the figure was 73%. Overall, it was 72%.

But 44% of Republicans said mass shootings should be accepted as part of a free society.

Poll respondents were also asked: “Regardless of how you feel about the issue, how likely do you think it is that Congress will pass any laws in the next few months that will make significant changes to gun policy?”

Some state governments have passed reforms. In New York City on Monday, the state governor, Kathy Hochul, signed a package of laws including licensing measures for assault rifles and a minimum purchase age of 21, expanded red flag provisions and a ban on sales of body armour.

Hochul told reporters: “It just keeps happening. Shots ring out, flags come down and nothing ever changes – except here in New York.”

The state, however, is home to another politician whose fate starkly shows what can happen to Republicans who express openness to gun reform.

On Friday, the New York congressman Chris Jacobs abandoned his bid for re-election, after stoking fury by expressing support for a federal assault weapons ban.

Jacobs represents suburbs of Buffalo, the city in which 10 people were shot dead at a supermarket on 14 May in what authorities say was a racially motivated attack.

Mass shootings, widely defined as shootings in which four people excluding the gunman are hurt or killed, have continued since Buffalo and Uvalde.

Last week, at a hospital in Tulsa, Oklahoma, a gunman killed two doctors, a receptionist and a patient.

The archive says there have been 246 mass shootings in the US in 2022, considerably more than one a day.

On Sunday, Murphy told CNN: “The possibility of success is better than ever before. But I think the consequences of failure for our entire democracy are more significant than ever.”
#Joe Biden

Oh ya 241 days ago
Well according to the FBI in 2020 454 people where killed with rifles in the US.
According to the US Government VAERS site 20.688 people died in 2020 from vaccines . Which one do you think is more dangerous
View all comments (1)Add comment