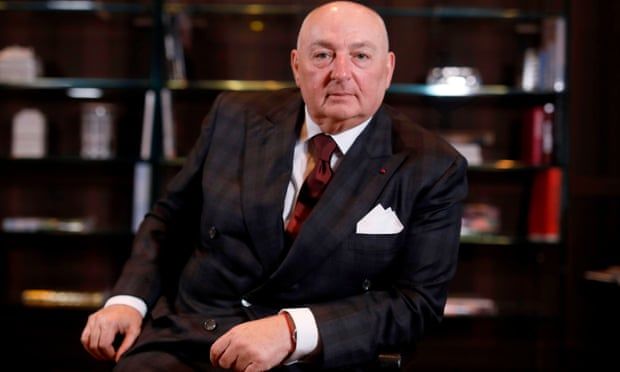 The Russian billionaire Moshe Kantor, who was sanctioned by the UK government on Wednesday, has long cultivated deep ties with British politicians and establishment figures, including Tony Blair and Prince Charles.

With an estimated net worth of £3.48bn, Kantor is the largest shareholder in the fertiliser company Acron, which the Foreign Office said had vital strategic significance for the Russian government.

But in Europe Kantor is best known as the holder of one of the Jewish community’s most high-profile roles, president of the European Jewish Congress (EJC), as well as his multitude of interests in Jewish charities, education and events.

Born in Moscow and now a British citizen, Kantor, 68, has maintained close ties to Vladimir Putin, and has brought a number of delegations to meet the Russian president, according to Haaretz. In 2017, Putin bestowed Kantor with the Order of Honour “in recognition of his professional achievements and longstanding fair work”.

The Kantor Centre, which the billionaire founded in Israel, has condemned Putin’s invasion of Ukraine.

In 2015, Kantor appointed Tony Blair to a role tackling antisemitism as chairman of the European Council on Tolerance and Reconciliation, an organisation funded and founded by Kantor. Blair is still listed as a chair of the organisation, along with the former Austrian chancellor Sebastian Kurz.

He also organised the World Holocaust Forum, which marked the 75th anniversary of the liberation of the Auschwitz death camp, attended in Jerusalem by Prince Charles, Macron, then US vice-president Mike Pence and Putin.

The Kantor Centre, which he founded at Tel Aviv University, issued a statement condemning the war in Ukraine as an “unprovoked invasion … and the cowardly war crimes committed under the directives of Vladimir Putin”.

It said the Russian invasion was “fascist-style aggression” and added: “Putin has the blood of thousands of victims, including children, on his hands. His policies pose an existential threat to world democracy, peace and security.”

The EJC said it was “deeply shocked and appalled by the decision” to impose sanctions on Kantor, adding: “Dr Kantor has been granted the most prestigious awards and honours from many European heads of state and government. We call for this decision to be reversed as soon as possible.”

Other oligarchs sanctioned by the UK on Wednesday were:

Andrey Guryev, the main shareholder in PhosAgro, one of the world’s biggest fertiliser companies, with shares that traded on the London Stock Exchange until they were suspended following the invasion. He was revealed in 2015 to be the beneficiary of an offshore company that owned the 25-bedroom Witanhurst mansion beside London’s Hampstead Heath, the UK’s second largest private residence after Buckingham Palace.

Leonid Mikhelson, the founder of Russian natural gas producer Novatek, which also listed its shares in London before the invasion. Mikhelson has an estimated net worth of $22bn (£17bn), according to Forbes, and his business partner is the sanctioned oligarch Gennady Timchenko. Mikhelson, an avid art collector, founded a not-for-profit Russian contemporary art foundation, V-A-C, in 2009, which has since funded international collaborations, including in London.

Boris Rotenberg, son of the co-owner of Russia’s largest gas pipeline producer, SGM, joins his billionaire father and uncle on the sanctions list. He lives in London’s Belgravia, according to the UK and US governments.

Sergey Kogogin is the director of Kamaz, a manufacturer of trucks and buses, including for the Russian military.

Andrey Akimov is the CEO of Russia’s third largest bank, Gazprombank, who was sanctioned by the US in 2018 amid anger over apparent Russian interference in the US 2016 election.

Sergey Sergeyevich Ivanov is the son of one of Putin’s closest associates, Sergei Ivanov, a former KGB agent who became deputy prime minister and defence minister. He is president of the world’s largest diamond producer, Alrosa, which the UK also sanctioned on Wednesday. Alrosa produces almost a third of the world’s rough diamonds.

Aleksander Dyukov is the chief executive of Gazprom Neft, Russia’s third largest and majority state-owned oil producer. A shipbuilding engineer by training, he worked at St Petersburg’s oil terminal shortly after Putin’s stint as deputy mayor, and has served on the board of petrochemicals company Sibur alongside other Putin allies.