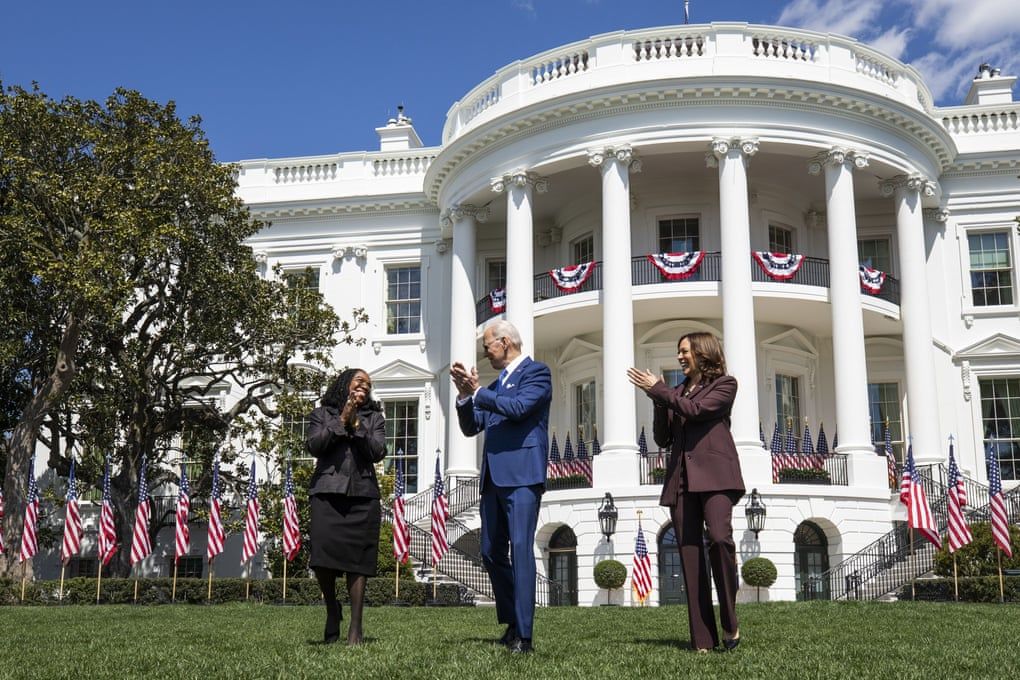 After 232 years, a Black woman is on the supreme court – and the atmosphere on a sunny Washington day was celebratory

They could all feel the weight of history. Yet the mood was as light as spring air when Ketanji Brown Jackson looked out at the crowd of smiling faces.

“It has taken 232 years and 115 prior appointments for a Black woman to be selected to serve on the supreme court of the United States,” the judge said in bright sunshine. “But we’ve made it!”

The audience on the South Lawn of the White House rose and clapped and hollered with a rare purity of emotion.

Jackson added: “We’ve made it – all of us. All of us. And our children are telling me that they see now more than ever that here in America anything is possible.”

It felt like the culmination of a journey. A day earlier, Jackson was confirmed by the Senate as the first African American female supreme court justice. In moving remarks on Friday, she spoke not only of her journey but that of her ancestors: the 400-year story of African Americans meeting slavery and segregation with resilience, creativity and hope.

The atmosphere at the White House was joyful and celebratory – not a sentence there has been much cause to write over the past five years. No doom and gloom over Donald Trump’s lies, the deadly pandemic or the war in Ukraine. Instead, the marine band played songs from the shows, including West Side Story. (“I like to be in America…”)

And after a week of sombre grey skies, lashing rain and surging coronavirus, the White House looked a little more majestic than usual in radiant sunlight. Fifty Stars and Stripes flags fluttered in a row. Birds could be heard singing. The relaxed, jovial crowd of hundreds erupted as Joe Biden, wearing shades, Vice-President Kamala Harris and Jackson strode to the podium, to the strains of “Hail to the chief”.

But it was Jackson’s grace note at the end of the 45-minute pageant that will linger in the memory – and the heart – and be studied by future historians and, she evidently hoped, generations yet unborn.

“They and so many others did the heavy lifting that made this day possible. And for all the talk of this historic nomination and now confirmation, I think of them as the true path-breakers. I’m just the very lucky first inheritor of the dream of liberty and justice for all.”

Becoming tearful, putting a tissue to her nose, Jackson continued: “To be sure, I have worked hard to get to this point in my career and I have now achieved something far beyond anything my grandparents could have possibly ever imagined. But no one does this on their own. 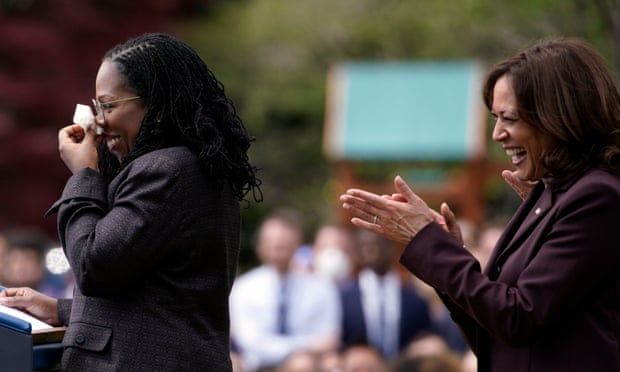 Jackson wipes a tear as she speaks to celebrate her confirmation.

“The path was cleared for me so that I might rise to this occasion, and, in the poetic words of Dr Maya Angelou, I do so now, while ‘bringing the gifts my ancestors gave’.”

There was applause and she took a deep breath.

It was a quotation from Angelou’s poem Still I Rise.

A shiver of emotion ran through the crowd, which rose as one. It included Jesse Jackson, 80, a civil rights veteran who was there when King was assassinated.

Her voice quivering with feeling that seemed to match the enormity of the moment, Jackson, watched by her parents, husband and daughters, went on.

“So as I take on this new role, I strongly believe that this is a moment in which all Americans can take great pride.

“We have come a long way toward perfecting our union. In my family, it took just one generation to go from segregation to the supreme court of the United States.”

It was hard to believe this was the same country that less than two years ago staged a similar outdoor event for the justice nominated before Jackson, Amy Coney Barrett.

On that grey day, Trump gloated at the prospect of tipping the court firmly in conservatives’ favour. The audience was appreciably less than diverse than for Jackson. It also proved to be a Covid super-spreader event. Time will tell if Friday goes the same way.

Jackson is replacing the retiring Stephen Breyer, 83, and so liberals will remain firmly in the minority when, from October, she begins hearing vital cases on affirmative action, gay rights and voting rights.

This week, Mitch McConnell refused to say whether he would even grant another Biden pick a hearing if Republicans regain the Senate majority. Friday’s heady euphoria was only a brief respite from demands for structural reform to restore balance to the court.

But what a respite it was. Trump presented one vision of America, infused with white identity politics and great men of history. This presented another, more generous in spirt, more authentic to the nation’s true origin story.

Oh ya 294 days ago
The 1st order of business for the SCOTUS should be to define what a women is so Jackson will know if she is one or not.. Must be hard knowing that you were chosen by the court because they wanted a women jogger and not because you qualify
View all comments (1)Add comment