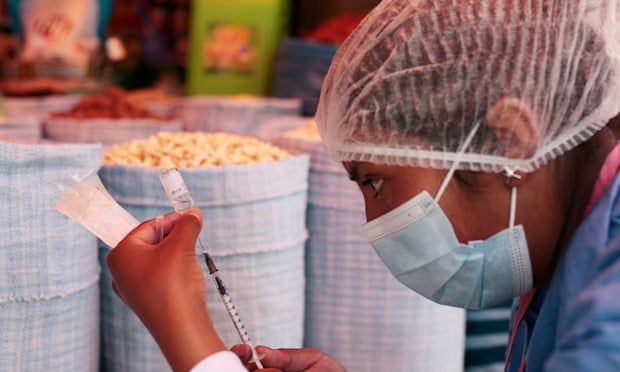 About half the country’s population is yet to receive a single dose of vaccine, despite availability

In a vaccination centre in El Alto, Bolivia, the staff bagged up in protective gear far outnumbered the few people sitting in plastic chairs waiting for their injection. A young doctor reeled off a list of all the vaccines available: Sinopharm, Sputnik, Pfizer, Moderna. What’s lacking is demand. They see 100 people on a good day.

South America, once the region most afflicted by the pandemic, is now the most vaccinated in the world. But this turnaround doesn’t extend to Bolivia, where roughly half the population is yet to receive a single dose – even though the state has had all the vaccines it needs since October.

As it stands, 45% of the population has received two doses, and a further 12% have had a single dose. Less than 7% have received a booster dose.

Data leaked from the Ministry of Health before Christmas gave a more detailed snapshot, revealing huge variations between municipalities. In general, departmental capitals had high levels of vaccination. Smaller cities were doing less well. But in many rural municipalities, particularly in the altiplano, less than 30% of the adult population had received a dose.

On 23 December, the government announced that either a vaccine certificate or a negative PCR test would be required to enter many public places from 1 January. For a few days at the start of the year, Bolivia suddenly had the highest rate of first doses per capita in the world.

But the measure triggered protests and blockades in major cities, led by social organisations aligned with the governing Movimiento al Socialismo (MAS). Spokespeople for the organisations said they weren’t against vaccination per se, but that it ought to be voluntary. They held that the requirement would in effect make vaccination obligatory.

According to Dr Yercin Mamani, former director of the departmental health service in Cochabamba, vaccine access is no longer the main problem. Instead, for various reasons, people are refusing vaccination. Mamani identified three groups. “First, the self-described anti-vaxxers,” said Mamani. “This is a very small group. Even in their biggest protests, they’ve never cleared 100 people.”

The second group refuse the vaccine for religious reasons. “Roughly 30% of the population is evangelical. Of this group, two-thirds have not accepted vaccination. In many places – especially in rural settings, where these churches are a little more radical – they’ve even come to demonise it.” 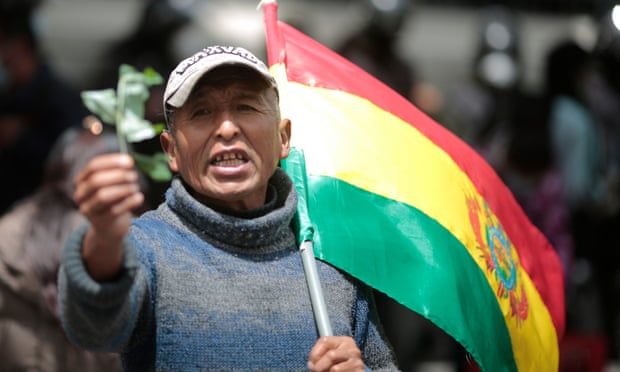 A demonstrator holds traditional medicine plants and a Bolivian flag during a protest against Covid vaccination.

The third group is less clearly defined, but Mamani described it as mostly rural, with a low level of education – and susceptible to misinformation about vaccines.

Such misinformation circulates on Facebook and WhatsApp, services used by most Bolivians. “Since the pandemic started, there’s been more misinformation than ever,” said Lucas Illanes, a journalist at Chequea Bolivia, a fact-checking service. “Even Bolivian authorities and recognised public figures spread misinformation.”

Illanes cited the case of chlorine dioxide, a toxic substance touted as a miracle cure for Covid-19. Its proponents have been invited on to TV shows and given press conferences, and even now figures in the government promote its use – against the advice of the Ministry of Health.

But Dr Pedro Pachaguaya, an anthropologist, pushed back against the idea that indigenous peoples were simply falling prey to misinformation. “It isn’t denialism about Covid, nor is it the typical anti-vaccine denialism.” Rather, there is a lack of trust in the healthcare system, and a strong preference for traditional medicine.

That lack of trust comes in part from previous negative experiences. “When these populations go to the healthcare system, they suffer mistreatment. And this trauma means they don’t want to go back.”

Nor has the healthcare system appreciated that these people already have their own traditional medicine systems. “Instead of being understood, these systems have been made invisible, erased, in a violent way,” said Pachaguaya. “And that’s the fundamental problem the healthcare system has here.”

Pachaguaya believes the best results will come when modern and traditional medicine are used together. For that, the government needs a culturally sensitive communications strategy. Pachaguaya cited the debacle around vaccine certificates as evidence of its absence.

“The people who are threatening blockades are people who support the government. It is their people, our people. We have to understand their feelings and perceptions regarding the vaccine,” said Pachaguaya. “Those that should be occupying themselves with this communication are neglecting it. They assume it is ignorance, but it’s not ignorance. Right now, people are thirsty for knowledge.”

Oh ya 102 days ago
Well we now know that about half of Bolivia will not be killed from the clot death shot. Good for them but sad the rest of the world are not as smart

mike 102 days ago
Bolivia - you are not alone.
Misinformation about covid has been a global phenomenon for at least 2 years. The Pharmafia makes endless money with it. The vaccination program is unnecessary and a total hoax.
View all comments (2)Add comment