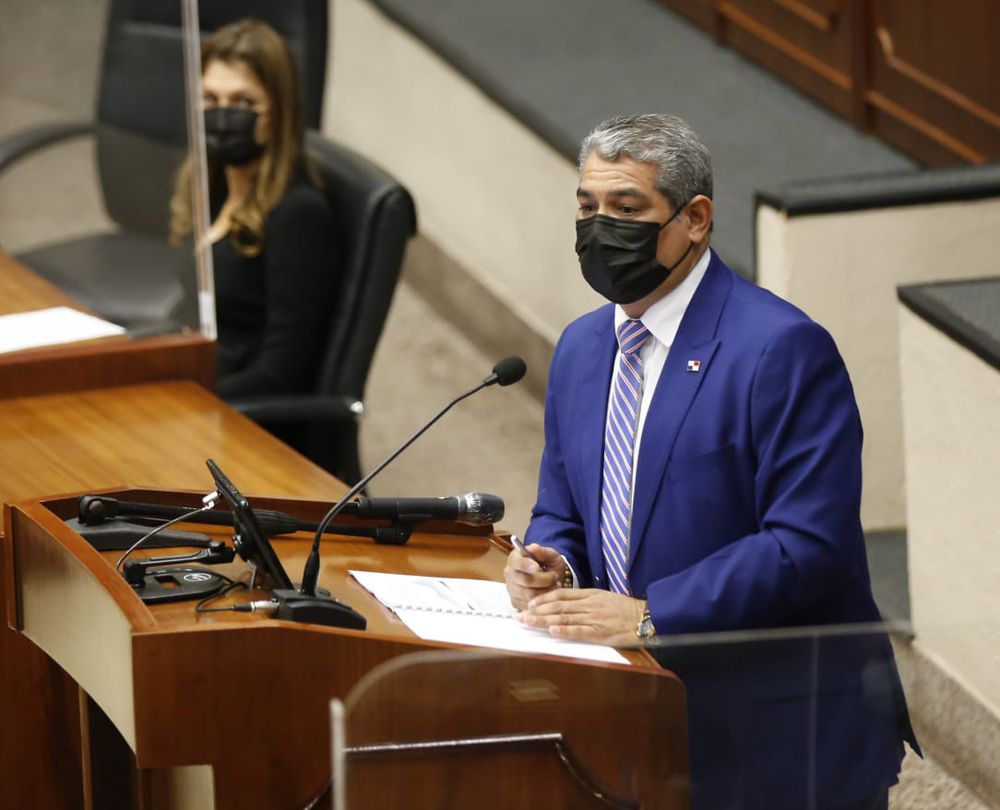 Ministers Sucre, Mouynes and Alexander appear before the Assembly

The ministers Erika Mouynes, of Foreign Relations, Luis Francisco Sucre, of Health, and Héctor Alexander, of Economy and Finance, entered the plenary session of the National Assembly at around 2:45 pm on Monday, February 8, to respond the questionnaire prepared by the deputies regarding the pandemic and the purchase of vaccines against Covid-19.
The three officials were summoned after opposition and government deputies agreed to appear. Unlike other days, in this session there was no advocacy period, so the president of the legislature Marcos Castillero gave the green light for the ministers to answer the 21-question questionnaire.

Sucre answered first. He spoke about the quarantine measures that have been taken in recent months, as well as the evolution of the pandemic in the country. He noted, for example, that the doubling time of coronavirus cases went from 30 days in October to 10 days in December and the increase in positivity from 8.2% to 22%.

That is why in December and January the mobility and quarantine measures were established, as well as the closure of economic activities.

He assured that if the quarantine measures had not been applied in December, the number of daily deaths would have reached 70 deaths in January.

On the quantity of vaccines that Panama will acquire, Sucre gave the floor to the vice minister of health Ivette Berrío, who revealed that the Government carried out negotiations in two ways: one of them multilateral and the other bilateral.

The multilateral was through the COVAX mechanism, with which the purchase of one million 112,410 doses was agreed, for $11 million. And the bilateral one was with Pfizer for the purchase of 3 million 75 doses, for $36 million, and AstraZeneca for the acquisition of one million 92 doses, for $4 million. And they are still negotiating with Johnson & Johnson the acquisition of 300 thousand vaccines.

For her part, Foreign Minister Mouynes announced that in seven weeks - starting the week of February 15 - Panama will have received the rest of the 450 thousand doses of Pfizer vaccines, and the AstraZeneca vaccines will arrive as of March. On January 20, the first batch of 12,840 Pfizer vaccines arrived in the country.

"216 thousand Astrazeneca vaccines will be received by Panama as part of the COVAX agreement," added Mouynes.

Meanwhile, the Minister of Finance, Héctor Alexander, detailed that the total resources allocated to address Covid-19 was 1.4 billion dollars. Of that amount, 1.07 billion dollars were assigned to the Panama Solidario program.

On the economic outlook, Alexander pointed out that the crisis caused by the pandemic has been devastating. "Government revenue fell about 30%," he said.

Regarding the Russian vaccine, Minister Sucre confirmed negotiations to reach agreements to buy more doses of vaccines with all the producing countries including Russia and India.

"Negotiations with Russia have not yet been established, a note was sent to initiate the process and we are awaiting that," he added.
#Erika Mouynes  #AstraZeneca  #Coronavirus  #Vaccines  #COVID-19  #Johnson  #vaccine  #Pfizer  #Covax  #Covid  #Sucre
Source
Add Comment