Major General Kyrylo Budanov spoke exclusively to Sky News and predicted the war will reach a turning point in August. He correctly predicted when Russia would invade earlier this year.

Ukraine's head of military intelligence says the war with Russia is going so well, that it will reach a turning point by mid-August and be over by the end of the year.

It is the most precise and optimistic prediction by a senior Ukrainian official so far.

In an exclusive interview with Sky News, Major General Kyrylo Budanov also said a coup to remove Vladimir Putin is already under way in Russia and the Russian leader is seriously ill with cancer.

The general's office is dark and stuffed with the paraphernalia of war and espionage, sandbags stacked on its windows, machine guns piled on the floor, and a spare rifle magazine on his desk used as a paperweight.

He is remarkably young to lead his country's military intelligence agency at just 36 years and speaks with the dry precision of his trade.

He showed little emotion, smiling only once as he said in English: "I'm optimistic."

General Budanov correctly predicted when the Russian invasion would happen when others in his government were publicly sceptical and now says he is confident about predicting its conclusion.

"The breaking point will be in the second part of August.

"Most of the active combat actions will have finished by the end of this year.

"As a result, we will renew Ukrainian power in all our territories that we have lost including Donbas and the Crimea."

Russia's tactics have not changed despite its shift to the east he says, and Russia is suffering huge losses though he would not be drawn on Ukrainian casualties. 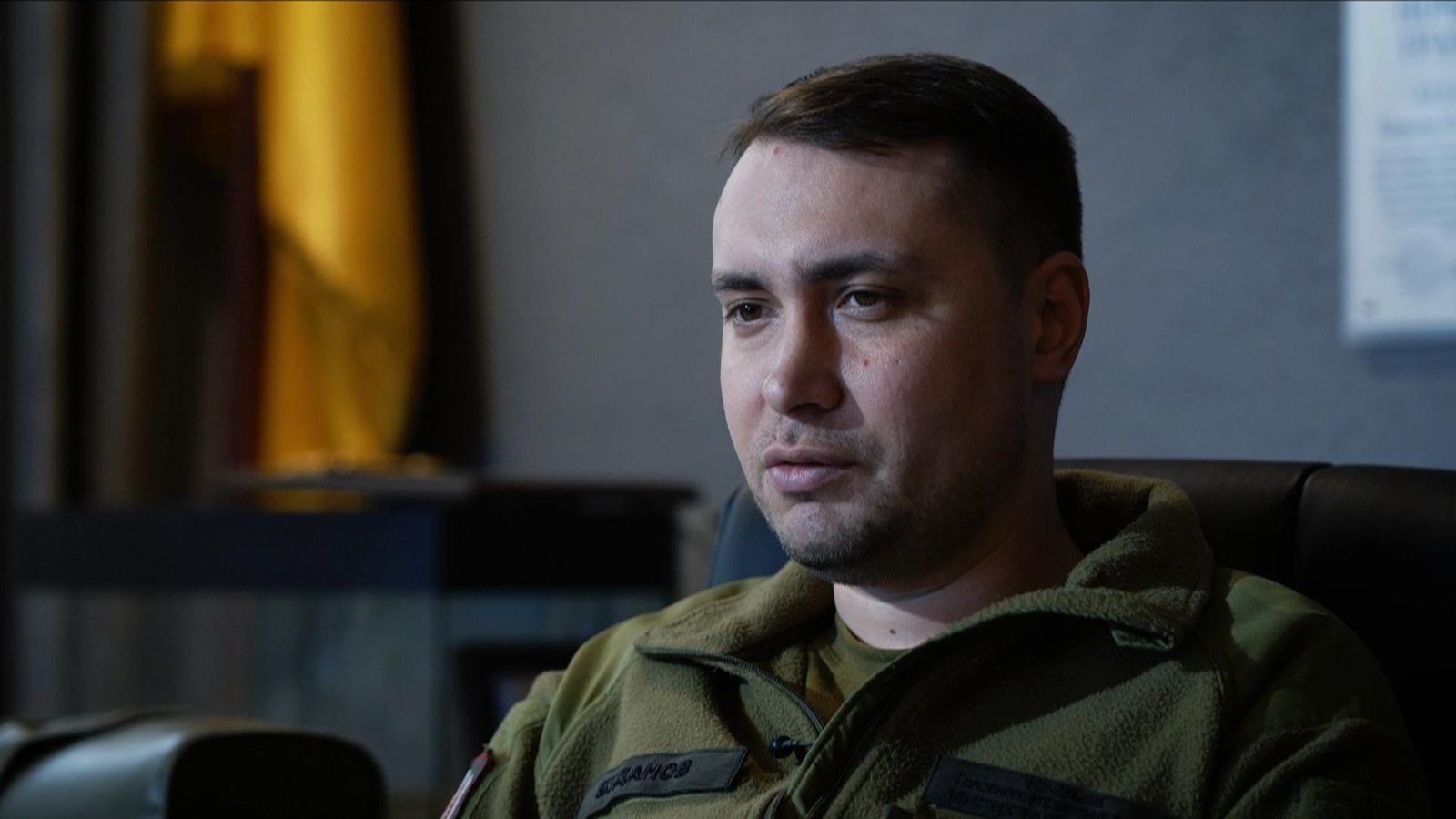 Russia just a 'horde of people with weapons'

He said he was not surprised by Russia's setbacks in the war.

"We know everything about our enemy. We know about their plans almost as they're being made.

"Europe sees Russia as a big threat. They are afraid of its aggression.

"We have been fighting Russia for eight years and we can say that this highly publicised Russian power is a myth.

"It is not as powerful as this. It is a horde of people with weapons."

Russian forces have been pushed back almost to the border around Kharkiv, he says, and a recent attack on forces further south trying to cross the Siverskyy Donets caused considerable damage.

Its aftermath has been caught in dramatic aerial pictures.

"I can confirm that they suffered heavy losses in manpower and armour and I can say that when the artillery strikes happened many of the crews abandoned their equipment," General Budanov said. 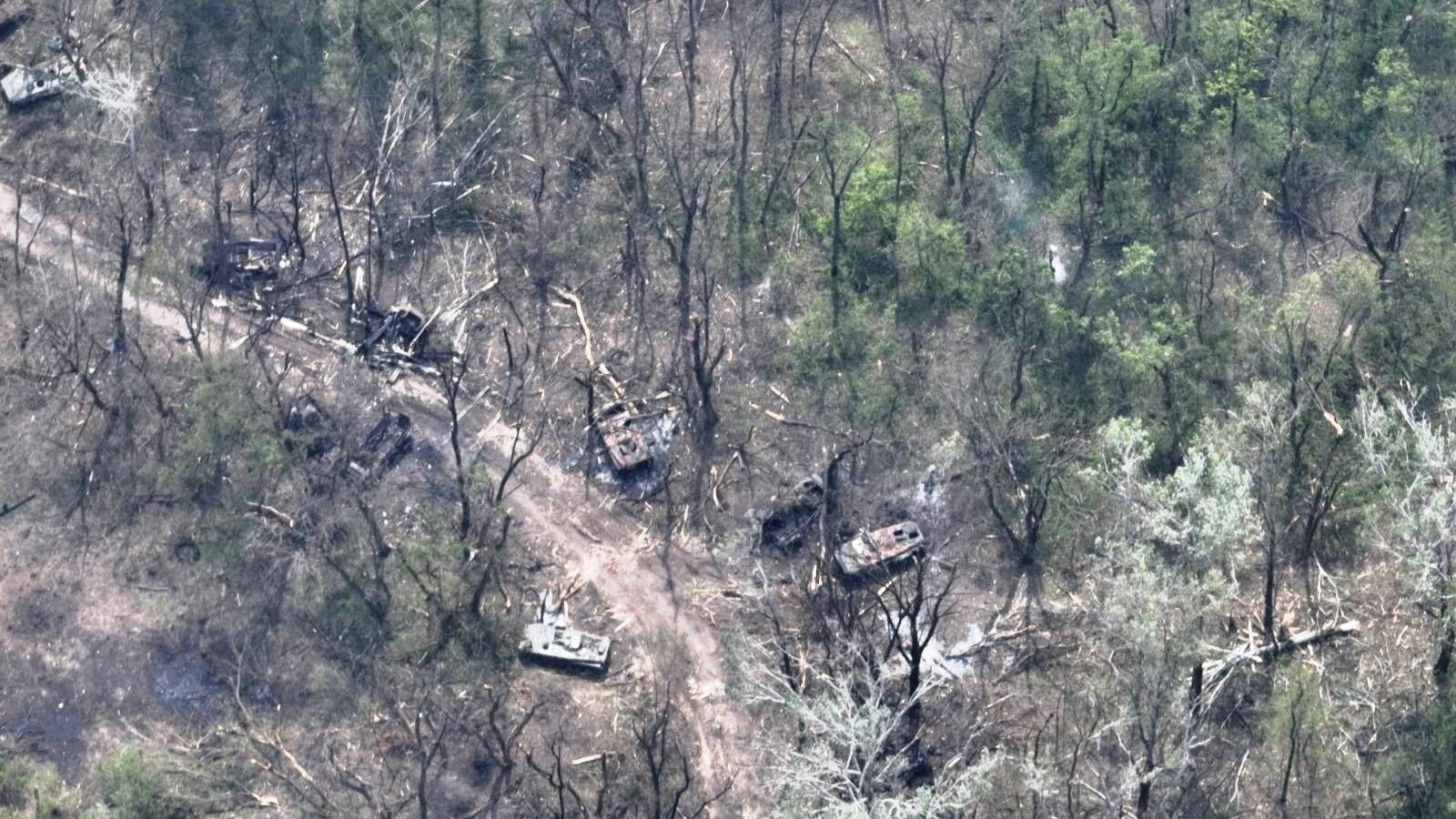 An aerial view of burnt vehicles on the banks of Siverskyy Donets River, eastern Ukraine

General Budanov also told Sky News defeat in Ukraine would lead to the removal of Russia's leader and the country's disintegration.

"It will eventually lead to the change of leadership of the Russian Federation. This process has already been launched and they are moving into that way."

Does that mean a coup is under way?

"They are moving in this way and it is impossible to stop it."

He claimed Mr Putin is in a "very bad psychological and physical condition and he is very sick".

The Russian leader has cancer and other illnesses, he says.

He dismissed suggestions he was spreading propaganda as part of the information war and was certain of his claims.

Ukrainian officials have cast doubts about Mr Putin's mental and physical well-being before and declared their certainty about eventually winning, but until this interview, none have been so specific and laid out a timeline for victory, a sign of their increasing confidence on the battlefield.