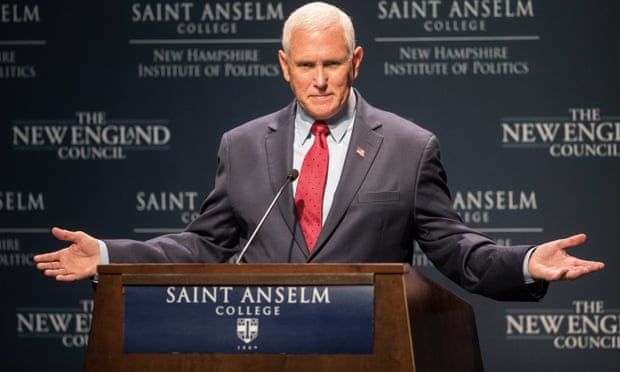 Search of Mar-a-Lago came as part of an investigation into Trump’s handling of classified material during his presidency
Former vice-president Mike Pence condemned attacks against the FBI by Republicans after federal authorities searched former president Donald Trump’s Mar-a-Lago property.

Republicans have been reacting with outrage over the FBI’s 8 August search of Trump’s Florida home which came as part of an investigation into his handling of classified material during his presidency.

“I … want to remind my fellow Republicans we can hold the attorney general accountable for the decision that he made without attacking the rank-and-file law enforcement personnel at the FBI,” Pence said on Wednesday at New Hampshire’s Saint Anselm College.

“The Republican party is the party of law and order. Our party stands with the men and women who serve on the thin blue line at the federal, state and local level. And these attacks on the FBI must stop,” he said.

Fears of violence against law enforcement officials have been growing since the search as federal authorities warn that it ignited extremists across the country.

“The FBI and DHS [Department of Homeland Security] have observed an increase in violent threats posted on social media against federal officials and facilities, including a threat to place a so-called dirty bomb in front of FBI headquarters and issuing general calls for ‘civil war’ and ‘armed rebellion,’” according to an internal intelligence memo that was widely shared with law enforcement officials of varying levels across the country.

Last week, an armed man was killed after attacking an FBI office in Cincinnati with an AR-15-style rifle and a nail gun.

On Sunday, a man drove into a barricade near the US Capitol in Washington DC, fired several shots into the air after his vehicle ignited, and then shot himself to death, according to police.

“Calls to defund the FBI are just as wrong as calls to defund the police. And the truth of the matter is, we need to get to the bottom of what happened. We need to let the facts play out,” said Pence, who alongside Trump, is considering a 2024 presidential campaign.

“This unprecedented action does demand unprecedented transparency,” he added, saying that he would call on attorney general Merrick Garland to fully disclose the reasons behind the recent search.

The former vice-president also said that he has not ruled out testifying before the January 6 select committee that is currently investigating Trump’s efforts to overturn and delegitimize the 2020 election results.

“If there was an invitation to participate, I would consider it…I would have to reflect on the unique role that I was serving as vice-president… “It would be unprecedented in history for the vice-president to be summoned to testify on Capitol Hill. But, as I said, I don’t want to prejudge ever any formal invitation rendered to us.”
#Donald Trump