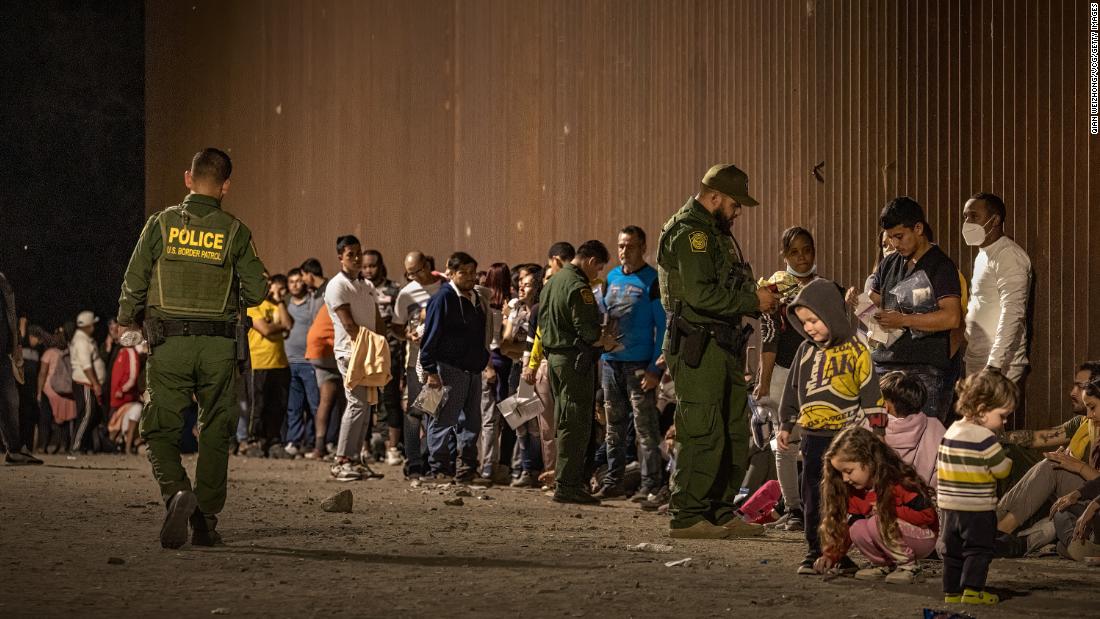 In the early morning hours, under beaming lights, groups of migrants turn the corner of the border wall, anxiously trying to reach US Border Patrol agents.

One by one, the migrants turn themselves in, hoping to seek asylum. It's an example of the mass migration around the world that's arriving at the US-Mexico border.

The influx is an alarming trend made more difficult by the wide range of nationalities arriving. Many of the migrants who spoke to CNN said they came from Venezuela, Cuba, Colombia and Peru -- marking a shift from previous years.

"The countries we're receiving now -- those nationalities are flying in, arriving to the border, and they're having to be processed and there's just so many of them that it is posing a challenge to the workforce," Clem said, adding that up to 1,000 migrants are apprehended daily.

According to the Department of Homeland Security, more than 6 million Venezuelan refugees and migrants have fled the country.

A Venezuelan migrant, overcome with emotion, held on to her family as she walked toward Border Patrol.

"I feel as though I've been reborn," she told CNN, in Spanish.

Authorities can turn back migrants under a Trump-era pandemic rule, known as Title 42, but it doesn't apply to everyone. The public health authority allows border officials to swiftly expel migrants to Mexico, but there are limits on which nationalities can be turned back.

That, coupled with frosty relations with countries like Venezuela and Cuba, keeps the US from removing certain people, meaning they might be released while going through immigration proceedings.

The Yuma sector has tried to adjust to manage the increasing flow of people.

"We continue to evolve with technology and resources not only for our agents, but also for the overall mission, the form of surveillance systems. And then we continue to add to the processing and the humane care of the migrants in custody -- wraparound medical services, food contracts to make sure that we've got plenty of food and to be able to take care of those in custody," Clem said.

"An agent from Yuma Station can start off in the Imperial Sand Dunes. Next thing you know, they're jumping on the boat in the Colorado River pulling somebody out who may be drowning. And then responding to 200 people from all over the world," Clem said, describing shifts for agents in his sector where the ongoing flow of people has taken a toll.

A challenge for the Biden administration

The flow of people north presents a steep challenge for President Joe Biden, making it a top issue discussed this week between him and Mexican President Andrés Manuel López Obrador.

"Addressing migration is a hemispheric challenge, a commitment captured in the Los Angeles declaration adopted by the Summit of the Americas," Biden said, referring to a document that was signed on to by 20 Western Hemisphere nations, and later adding that migration is at "historic levels" throughout the region.

Administration officials have been monitoring the increased movement of migrants in the region for months. Many migrants who are journeying north worked informal jobs before the Covid-19 pandemic and were especially vulnerable to falling into extreme poverty as economies tightened, while others are fleeing violence and political instability.

Migrants often pass through a perilous jungle, known as the Darién Gap, which spans Panama's and Colombia's borders, in their journey to the US.

Between January and July 11, 56,175 migrants have crossed through the Darién Gap, according to the Panamanian government. Since February, the number of migrants passing through have increased, figures show. The first 11 days of July have already surpassed the entire month of April.

Isai Flores, a migrant from Venezuela, told CNN he had traversed the Darién Gap jungle on his way to the US, calling it "horrible." Flores cited worsening conditions in his country as his reason for leaving.

As he prepared to turn himself in to Border Patrol, Flores told CNN he finally felt freedom.

The US has sought assistance from Panama, as well as its neighbor Costa Rica, where migrants also travel through. An agreement between the US and Costa Rica outlines broad commitments to strengthen enforcement, exchange information on flows and stabilize host communities, according to text reviewed by CNN.

The document states, for example, that the US and Costa Rica will "explore options" to strengthen the Professional Migration Police and the Border Police of Costa Rica, "integrate technologies that facilitate the exchange of information on migratory flows, in accordance with the laws of each participant," and develop information campaigns. But it doesn't provide further specifics on the execution of those measures.

But those efforts take time. And the political pushback over the handling of the border has been swift.

Arizona Gov. Doug Ducey signed legislation at the end of June to shore up funds for border security, following an announcement in May to bus migrants apprehended at the Yuma-Mexico border to Washington, DC. Twenty-five buses have departed Yuma with a total of 942 migrants as of Monday, according to the governor's office.

'We haven't seen these numbers since the Haitian migrant crisis'

The changing demographics of who's arriving have also strained resources along the Texas-Mexico border.

The Del Rio sector, located along the Texas-Mexico border, is facing record-breaking numbers, according to a US Customs and Border Protection official.

Over 24 hours this week, around 2,200 migrants were apprehended across the Del Rio sector, almost 1,000 more apprehensions than the Rio Grande Valley during that same time, the official said.

"We haven't seen these numbers since the Haitian migrant crisis," the official told CNN, referring to last September when thousands of migrants -- primarily Haitians -- gathered under the Del Rio International Bridge.

On Tuesday, one group apprehended totaled about 500 people, the official added, describing the total arrests as a "high-water mark" for the sector. For days, the sector has been grappling with three to five large groups, defined as 100 or more people, turning themselves in to Border Patrol daily.

This week, in a signal of the growing number of arrivals, CBP announced the opening of a new facility in Eagle Pass, Texas, to process migrants. The new facility replaces a smaller structure, according to CBP, and has a capacity of 1,000.

Migrants are crossing during the day and often have to wait hours in triple-digit heat to be processed and transported via buses to the station. They're usually from Cuba and Venezuela, nationalities that are not subject to Title 42. There has also been an influx of Nicaraguans and Colombians.

"We're doing everything we can to stop that from happening," the official told CNN, referring to a repeat of last September. "That's always a concern."