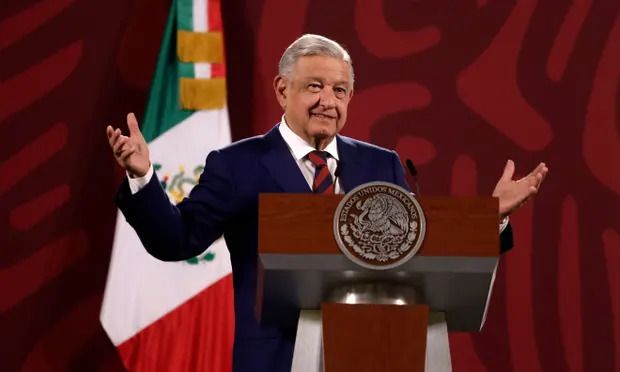 Mexico will try to ‘deceive the world’ at Cop27, experts warn

President not expected to attend summit but critics cast doubt on veracity of pledges the country could make
Mexico, one of the world’s biggest greenhouse gas emitters, is expected to announce a hotchpot of old, inadequate and undeliverable climate pledges that will leave its Paris pledges in tatters, experts have warned.

Climate action has nosedived under the leadership of Andrés Manuel López Obrador, who had to be blocked from rolling back Mexico’s modest Paris greenhouse gas targets by the country’s supreme court, while emissions are rising.

John Kerry, the US climate envoy, said last week that the Mexican president, known as Amlo, would make a major announcement on the country’s climate commitments during Cop27. Amlo is not expected to attend the UN summit in Egypt, but reports suggest the announcements will include:

*  A reduction in methane emissions from the state-owned oil company, Pemex – an important but existing target for which Pemex has been fined for non-compliance.

*  A 1,000MW state-opened solar plant – construction is already under way for a 180MW project, and the government had previously already ruled out further investment to expand the energy potential.

*  A lithium commitment. Mexico has the ninth-largest identified deposits of lithium – a crucial mineral for electric vehicles and other green technologies – but there has been no government investment so far in advancing extraction, and none is currently being mined. Experts say the country is years away from producing its first gram of lithium.

“It’s highly likely that the Mexican government will try to deceive the entire world at Cop27 with false actions and projects that will never be built,” said Carlos Flores, a renewable energy expert in Mexico. “We are not going to meet our current pledges, never mind anything more ambitious.”

According to the carbon action tracker, a nonprofit science group tracking government climate action, Mexico’s climate policies under Amlo “continue to go backwards, as fossil fuel use is prioritised and climate-related policies and institutions dismantled. For Mexico to achieve even its outdated 2030 climate commitments, it needs to reverse its policies, move away from fossil fuels, foster renewable energy, and tackle the transport sector.”

Amlo’s 10-point climate action plan, which he unveiled at the major economies forum on energy and climate held by Joe Biden in June, included the acquisition and construction of new oil refineries. His government has also dismantled Mexico’s national institute for climate change and the federal climate change fund, all of which place Mexico among the world’s worst climate governments.

Mexico has huge potential for renewables, but Amlo has backtracked on numerous projects, while being criticised for imposing others (including wind and hydro) on indigenous lands without proper consultations.

In a statement on Tuesday, the environment ministry said Mexico would raise its target to cut greenhouse gas emissions to 30% by 2030, up from the Paris goal of 22%. But given Amlo’s pro-fossil fuel, anti-renewable stance, it was unclear how Mexico would achieve the old pledge, let alone the more ambitious new one.

Flores said: “There is no way to look positively at the climate action of an administration that has been focused on undermining renewable energy. In order for Mexico to meet its Paris objectives, we will need a new president in 2024 who can regain the trust of investors and has a real commitment to the environment.”
#Joe Biden
Add Comment