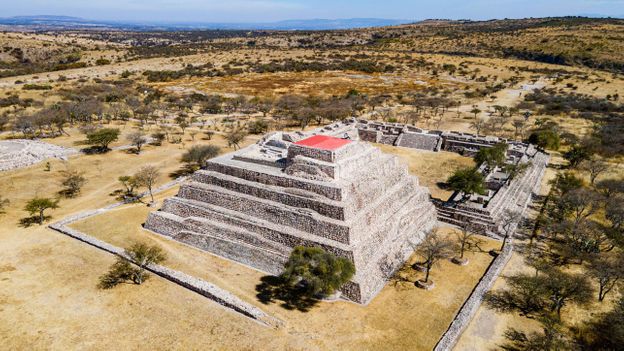 From a distance, the grey volcanic rock pyramids and their encircling stonewalls looked like something that Mother Nature had wrought herself. Located in Cañada de La Virgen (The Valley of the Virgin), an area about 30 miles outside the city of San Miguel del Allende in Mexico's central highlands, the stone formations blended into the arid, desiccated landscape like a diminutive mountain range.

But as I got closer to the largest of the three structures, there was no doubt it was man-made. A staircase of identical steps, etched into the hard, dark rock, had clearly required a skilled mason's hand. The other two pyramids, smaller and less well-preserved, bore a similarly unmistakable human touch. The timeworn edifices were erected by a civilisation long gone.

Locals had long been aware of the ruins outside their city. Some rumoured that there were dead people buried in the stone pyramids, while others spoke of hidden gold. Grave diggers had looted the structures and even tried to blow them up with dynamite, but whether they found any fortunes is not recorded. Unexcavated for centuries, the site remained largely unknown to the world beyond San Miguel del Allende, until a team of Mexican archaeologists started digging deeper in the early 2000s. 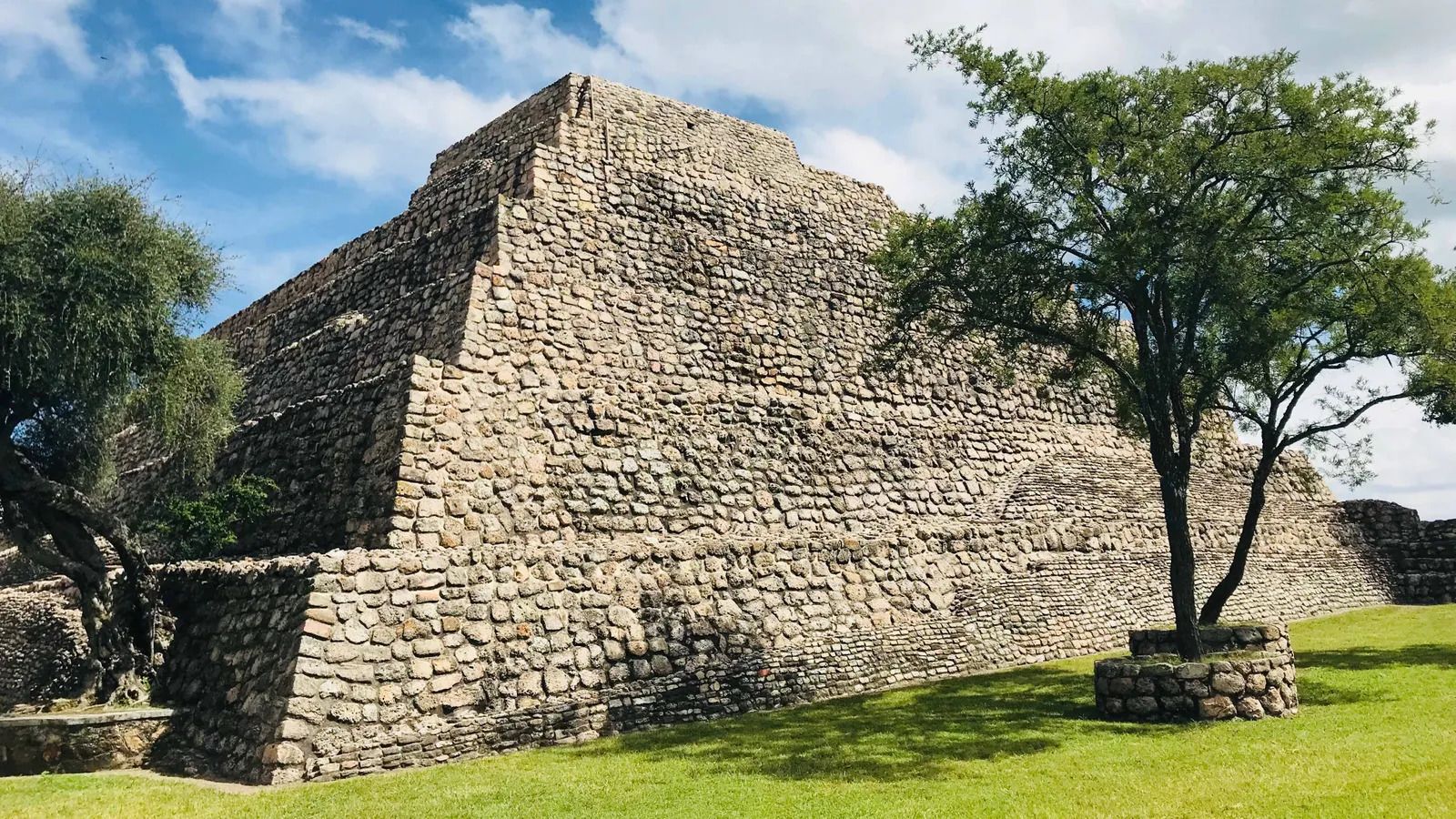 Local anthropologist Albert Coffee, who also helped with the excavations, began guiding tours for archaeologically curious visitors like me in 2011. "This is The House of the Thirteen Heavens, built in about 540 CE by the people who lived here at that time," he said as we walked around the site. He was pointing to the tallest pyramid, which had a rectangular base, sloping sides and a staircase leading up to its flat platform top, about 15m high. "They mined this tufa rock in the nearby quarry."

The two smaller structures, named The House of the Wind and The House of the Longest Night, were built from the same material, he added. But exactly what ancient society built the site remains an open question, even after more than two decades of excavation. That's because determining who built the pyramids has proven difficult. "In many ways, this place is still a mystery, and it keeps surprising us," Coffee said. "We keep finding new information."

What is known is that The House of the Thirteen Heavens was a temple dedicated to a task vitally important in antiquity: keeping time. Centuries ago, keeping track of time, and of seasons, was no easy task. There were no clocks and no calendars, so people looked to the celestial bodies in the sky to stay informed.

"Today we keep time with watches and iPhones, but back then people had to use the Sun and the Moon," explained archaeologist Rossana Quiroz, director of the Museum of PreHispanic Astronomy in San Miguel del Allende, who has been working on the excavation with Gabriela Zepeda from Mexico's National Institute of Anthropology and History. "These people were timekeepers."

Quiroz explained that this ancient civilisation built The House of the Thirteen Heavens to be a calendrical instrument based on the sun's movement throughout the year and used it to identify important dates for agriculture. They would have invested a tremendous amount of effort into erecting the pyramids, she said, which have lasted for more than 1,500 years. But ironically, their own story has been almost entirely lost to time – in part because they left no written texts, and because the Spanish conquest of modern-day Mexico in the 16th Century decimated societies. 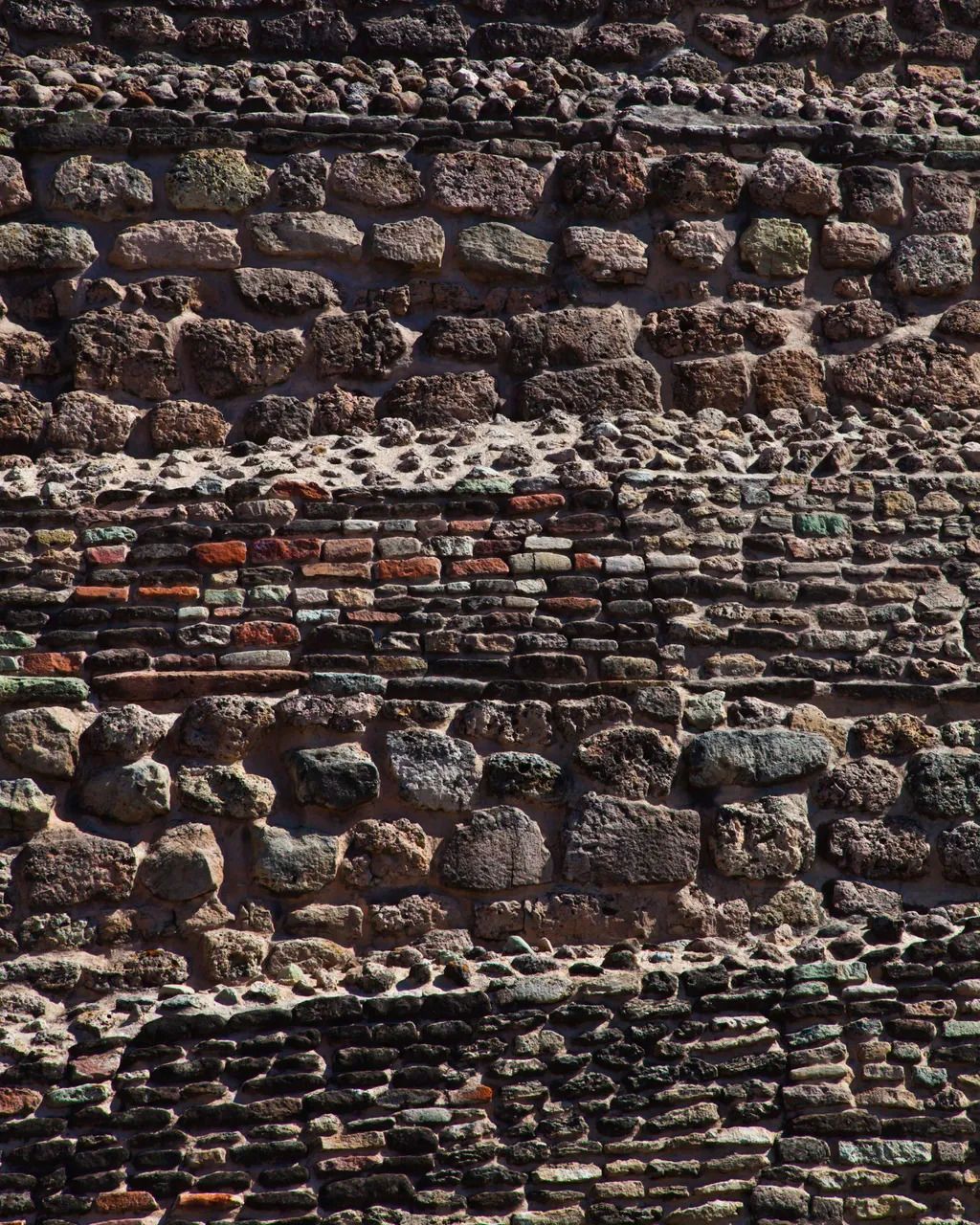 Yet, for indigenous cultures, preserving and honouring their ancestral knowledge and traditions is vitally important, especially since their histories have often been often misinterpreted or forgotten. That's why over the past two decades, Quiroz and Zepeda have been trying to amass as many facts about the ancient timekeepers as they can. But despite recovering numerous artefacts from the site, they still haven't fully pieced together its history. And every answer only seems to lead to more questions.

They know that the ancient timekeepers were a sophisticated civilisation with a keen understanding of astronomy, architecture and construction principles. Many pre-Columbian cultures worshipped specific deities, but these people worshipped the creation of space and time, Quiroz said.

In their architectural design, they mimicked what happened during the creation of the world as they knew it. According to indigenous oral history, Quiroz explained, the sacred entities created the world, space and life, and gave humans the Sun as a reference for telling time. "Therefore, humans had to replicate that organisation on Earth. First you organised the four corners of the world. And then the Sun moves throughout all four corners during the year. So, what you are seeing in the temple is a replica of what happened during the first creation of the universe."

The House of the Thirteen Heavens' four corners corresponded to winter and summer solstices on 21 December and 22 June; and to two important agricultural dates – 4 March and 9 October – indicating when it was time to plant and harvest, respectively. If you stand in front of the pyramid's staircase on each of those four days, the sun perfectly lines up with the corresponding corner. 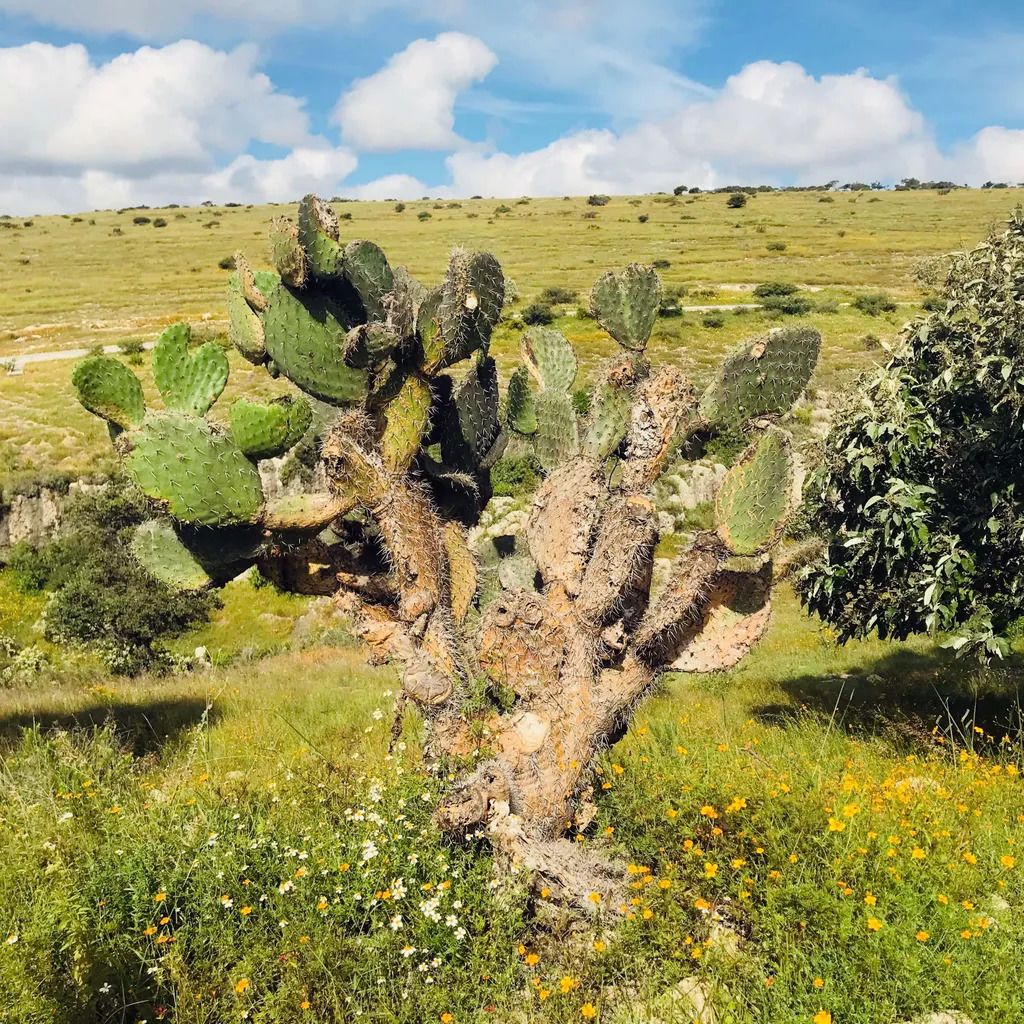 When it came to erecting the pyramids, the builders used sophisticated architectural techniques and materials. They mined the rough tufa rocks formed from solidified volcanic ash and positioned them so that each piece helped others stay in place – a method called a hueso. And while the pyramids may look rough and unsophisticated today, Coffee explained that the original architects spared no effort to make them beautiful, decorating the facades and staircases with neatly polished limestone they brought from miles away. "They spent two to three days transporting them," he said.

To affix the decorative limestone pieces, they harvested a naturally gluey substance from the leaves of nopal – the prickly pear cactus that grows in the area – and used it as a natural adhesive. "When you chop cactus leaves and let it rest in the water, by next day it becomes sticky," Quiroz said, explaining that this was the process that the ancient builders likely used. "If you mix it with a mortar, you get a stronger glue-like substance," she added.

This centuries-old method is still used today by some indigenous people who live in the area – and has been adopted in eco-construction in Mexico. "We are recovering the knowledge of the ancient people," Quiroz said.

On further exploration of the structures, the archaeologists found that they indeed held items of tremendous value, just not gold. They discovered 19 buried bodies – males, females, a child and even a dog – all of which are being examined.

The team's original hypothesis was that the site was built by the Otomi people, whose descendants live in the area today. But so far, the archaeologists haven't been able to carry out the DNA analysis to fully prove it. "We don't have the modern Otomis' DNA in our DNA bank yet," Quiroz said – and it's not a simple process to obtain. "You have to have permission from the communities. And there are also different Otomi people. So, it's a very sophisticated study you have to do. It's not as easy as it seems." 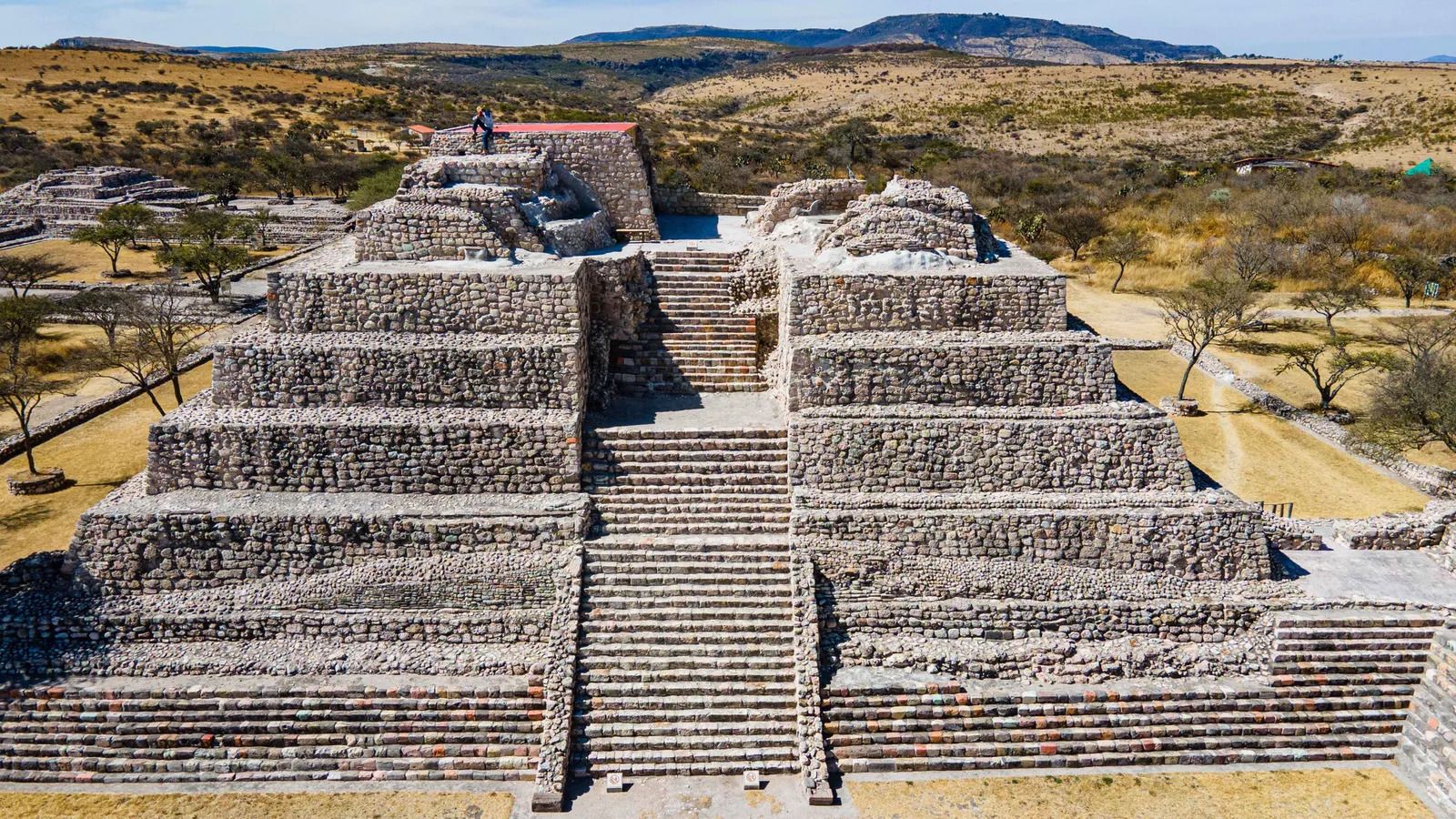 Nineteen skeletons have been found at the site, including a female skeleton at the top of the House of the Thirteen Heavens

However, one of skeletons – found at the very top of the House of the Thirteen Heavens – gave the archaeologists more food for thought. Based on various marks on its bones, they first deemed it a man: a hunter or warrior. But the latest DNA analysis revealed that she was a woman. More surprisingly, the analysis showed that the body was much older than the structures themselves. While the temple was built in 540 CE, the woman's skeleton dates to 400 BCE, nearly a millennium earlier.

These people had carried the body with them wherever they went, and they were carrying it for at least 950 years

"These people had carried the body with them wherever they went, and they were carrying it for at least 950 years," Quiroz said. "That means that she was a very important ancestor. So, when they built the temples, they placed her body up at the very top. But we don't know who she was and why she was so special."

As I climbed up the staircase, treading carefully since there were no banisters to hold on to, I tried to imagine the mysterious culture that made the pyramid their sacred ancestor's last resting place. "They may have been a matriarchal society," Coffee told me; something that wasn't a very common societal structure in antiquity.

Further genetic analysis has revealed more surprises. Once the team ran the genomic analyses of the skeletons, their DNA revealed genetic similarities with several other Mexican nations, including Nahuas, Purépecha, Tarahumara and Maya. So, the site may have been a multicultural gathering place where people from all over Mexico came to congregate, Coffee said.

Archaeologists are hoping to uncover more secrets from the once-forgotten site and piece together the puzzle of these sophisticated timekeepers. So much of this society's history has been lost to time – to the very time their ancestors were so good at keeping. "That's why the science of archaeology is so interesting," Quiroz said, as it can help us uncover the past.

Our ancestors have been through a lot, she noted, so we owe it to them to recover their story in the fullest way possible. "How can we remember such knowledge and wisdom if not by telling [their] story once and again?" she said.