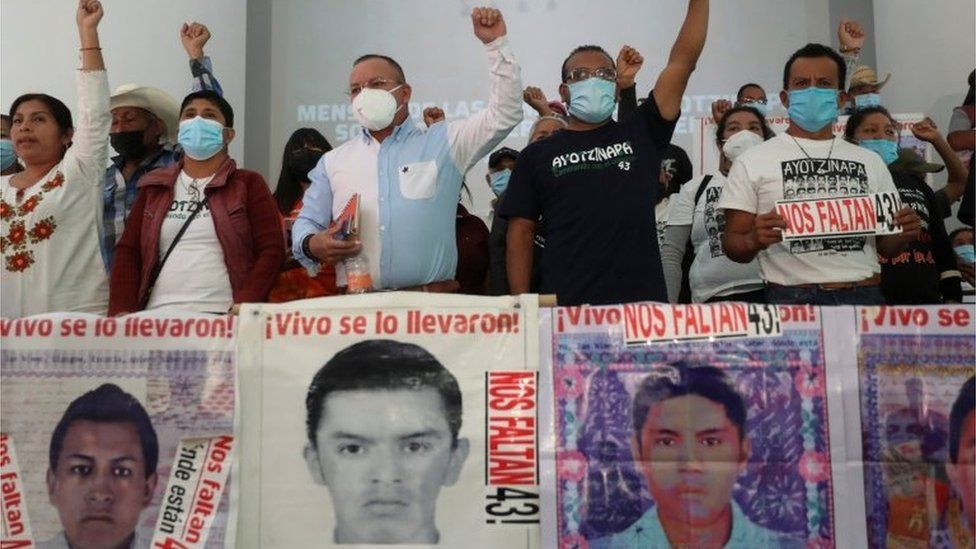 The parents of 43 Mexican students who disappeared in 2014 have expressed outrage after experts accused the armed forces of hiding evidence.

A new report has revealed that Mexico's military failed to disclose that the students were under surveillance at the time of their disappearance.

Neither the navy nor the army have commented on the report.

One of the report's authors said that investigators had hoped that they would have found out by now about the fate of the 43 students but that it had been "impossible due to the destruction of evidence and the spinning of a lie at the highest levels".

The 43 studied at an all-male teacher training college in the town of Ayotzinapa, in western Guerrero state. The college has a history of left-wing activism and the students regularly took part in protests. 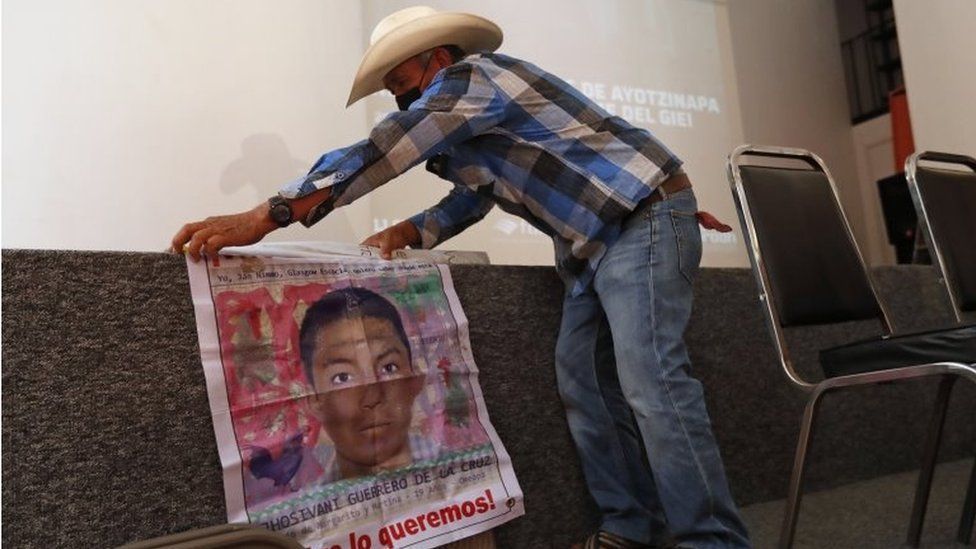 On 26 September 2014, a large group of them travelled to the nearby town of Iguala to stage a protest against what they saw as discriminatory hiring practices for teachers.

In the chaos that followed, six people were killed. Some students managed to flee to safety but 43 vanished after the clash.

What happened to them?

The first official investigation - carried out under then-President Enrique Peña Nieto - found that the 43 had been seized by corrupt municipal police officers who handed them over to members of local drugs gang Guerreros Unidos (United Warriors).

The gang then took them to a rubbish dump in a place called Cocula, where they killed them and burned their bodies, the official report continued. They dumped their bones and ashes in a nearby stream, it concluded.

However, that report has since been widely discredited, and a judge has issued an arrest warrant for the head of the investigation, Tomás Zerón, who has fled Mexico and remains at large.

What does the new report reveal?

Monday's report is the latest from the Interdisciplinary Group of Independent Experts (GIEI), created by the Inter-American Commission on Human Rights shortly after the students' disappearance to conduct an independent investigation. 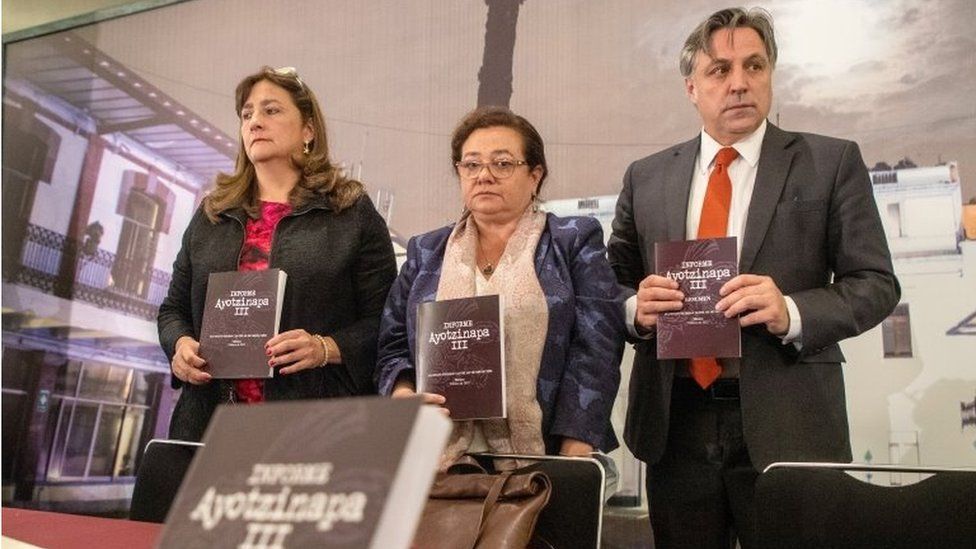 In it, the GIEI says that Mexico's armed forces were aware from the very start that the students were being kidnapped by a criminal gang and later hid information that could have helped locate them.

According to the GIEI's report, both the students and the Guerreros Unidos gang suspected of killing them were being tracked by the military when the events unfolded on 26 September. This surveillance only came to light when government documents were recently declassified.

"It's hard to understand how and why this surveillance would have stopped when the forced disappearance happened," the report says about the lack of information handed over by the armed forces .

Navy drone footage examined by the GIEI shows marines tampering with the rubbish dump in Cocula, where the students' bodies were allegedly burned and where the remains of one the students were later found.

The marines' visit there had not been recorded in official documents and only came to the GIEI's attention because of the drone footage.

What reaction has there been?

Considerable doubt had already been cast on the official version of events and the parents of the missing students have for years said they do not believe the students' bodies were burned at the rubbish dump.

The parents have also long demanded that senior members of the armed forces be compelled to give evidence. They suspect them at best of obstruction, and at worst collusion.

However, they were further angered when the lead investigator said the navy had "manipulated and hid evidence from the first day to the last".

"How can we not be mad if the investigation did not go forward for lack of information when we, the parents, asked for that information?" Mr Mora asked during a news conference held by the parents on Tuesday.

"How can we not be angry if we know nothing about our children?"

Emiliano Navarrete, the father of another missing student, said the investigation had to go all the way to the top. He demanded that Enrique Peña Nieto, who was president at the time, be made to testify.