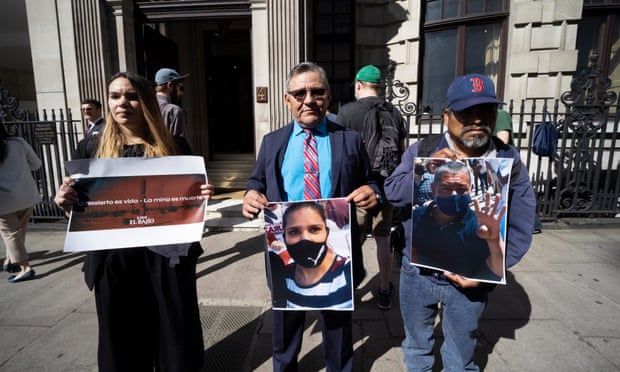 Owners of community land bought shares to join annual meeting of Fresnillo, a Mexican FTSE 100 company
Mexican farmers have travelled to London to demand that a FTSE 100 company compensates them for illegal mining on their land and explain violence against anti-mining activists.

Penmont mining, a subsidiary of Fresnillo, was ordered by an agrarian court in Mexico in 2013 to pay members of El Bajío community, co-owners of common land in Sonora, north-west Mexico, for the gold extracted and to restore the land to its original state.

Having bought shares in Fresnillo, three El Bajío representatives, as well as activists from London Mining Network and London Mexico Solidarity, entered the company’s annual meeting to ask the chairman why it had not complied with the court order and about the kidnapping, disappearance and murder of anti-mining activists.

Fresnillo told the Guardian it had complied with the court order by vacating the land and that it had no connection to any violence.

Jesús Thomas, one of the co-owners, said after the meeting: “We have spent eight years trying to get justice for our people. There are tonnes of cyanide in the soil, a lot of animals are dead. I made it clear to them [in the meeting] that they are in the wrong. They never said anything in reply, they don’t have any answer.

“At least the owners of the company now have the right information to decide whether they are going to do the right thing.”

In 2018, two members of El Bajío community – Raúl Ibarra de la Paz and his wife, Noemí López – were killed and disappeared respectively. Last year the president of the community, José de Jesús Robledo Cruz, and his wife, María de Jesús Gómez Vega, were killed and a list of the names of 13 other members who have fought against mining was found next to their bodies. Penmont has previously suggested criminal gangs were to blame for the violence.

Fresnillio, which in 2008 became the first Mexican company to list on the London Stock Exchange, made gross profit of $936.9m (£788m) last year, according to its annual report.

A spokesperson for Fresnillo said: “Our purpose is to contribute to the wellbeing of people through the sustainable mining of silver and gold. Core to this is how we engage with our local communities and we are proud to have an extensive series of community programmes across our business based on decades of trust and cooperation.

“We comply with all laws, in all our markets, at all times and obviously reject immediately any suggestion we are in any way responsible for the tragic deaths of community members. Fresnillo employees themselves have been victim of continued inter-community violence. More specifically, Fresnillo has complied fully with the court order and as a result, vacated 1,824 hectares of land, resulting in the suspension of operations at Soledad-Dipolos since 2013.”
Add Comment