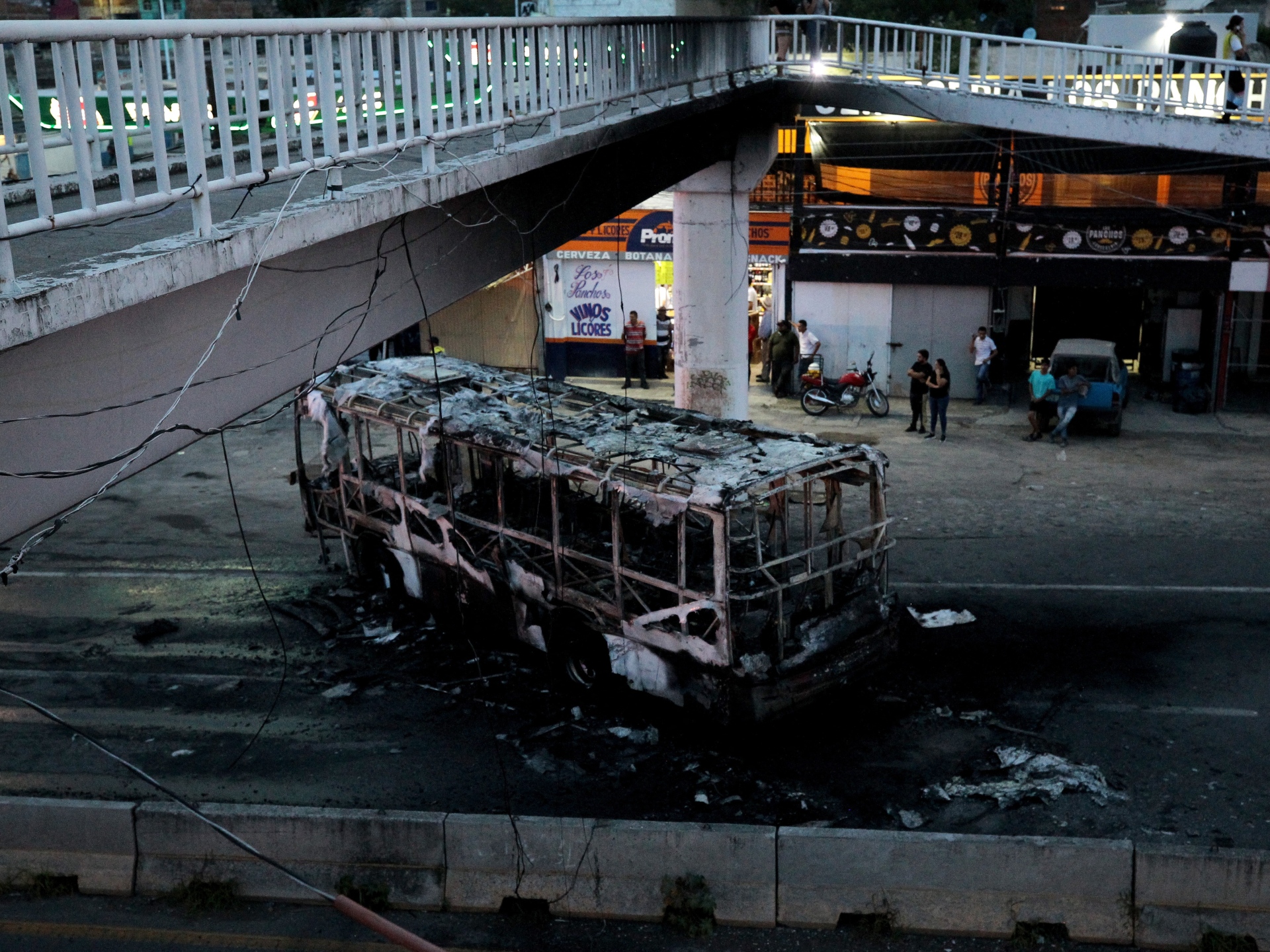 Drug cartel gunmen have burned more than two dozen convenience stores and blocked roads with blazing vehicles in western Mexico in response to a military operation that was aimed at an apparent meeting of gang bosses, authorities said.

Images circulated on social media showed armed men commandeering cars and buses and setting them on fire late on Tuesday. Other images showed burned-out convenience stores from the violence that erupted in several municipalities in Guanajuato and Jalisco, two of Mexico’s most violent states, according to officials.

Mexico’s President Andres Manuel Lopez Obrador said on Wednesday that soldiers had confronted criminals, including “bosses”, at a “meeting of two gangs” in Jalisco state.

The president said there was a shoot-out, arrests and “this provoked protests of burned vehicles, not only in Jalisco, but also in Guanajuato”.

The US Consulate in Guadalajara, the capital of Jalisco state, issued an advisory instructing employees “to follow the advice of local authorities and to shelter in place until further notice”.

Translation: On Tuesday afternoon in several municipalities of Guanajuato and Jalisco, Mexico, a violent day was experienced with armed confrontations and drug blockades.

According to local media reports, the violence took place in the municipalities of Celaya, Irapuato, Salamanca, Silao and Apaseo el Grande in Guanajuato state, and in Ixtlahuacan del Río in Jalisco state.

Oxxo, a national chain of convenience stores owned by Femsa, the country’s largest bottling company, said in a statement that 25 of its stores in Guanajuato – which borders Jalisco, and is home to the drug cartel of the same name – were either totally or partially burned.

“Fortunately, all of our employees and customers are all right,” the company said.

Videos shared on social media showed armed men, some shouting slogans in support of the Jalisco drug cartel, bursting into convenience stores and setting fires as customers and staff fled.

Guanajuato-based security analyst David Saucedo said the Oxxo stores were apparently targeted because of their ubiquity and light security rather than because of any dispute with the company.

“They are small stores, there are many throughout the state, they don’t have security like a Walmart or Liverpool (department store) have,” Saucedo said, adding “they are open at night, and everyone recognises them.”

Lopez Obrador said authorities were still deployed on Wednesday in the area of Jalisco where the initial arrests were made.

Jalisco state Governor Enrique Alfaro said via Twitter that no one was injured in the destruction that followed the arrests. He said five people had been detained in the raids and one suspect was killed, but did not identify them.

Jalisco is dominated by the Jalisco New Generation cartel, whose leader Nemesio Oseguera, “El Mencho,” is among the most sought after by Mexican and US authorities. Neighbouring Guanajuato is also the scene of a bloody proxy war between the Jalisco and the Sinaloa cartel, which operates through local gangs.

This is not the first time drug cartel members have sown chaos in retaliation for military operations against them.

Cartels often create chaos in an effort to keep authorities from transporting captured cartel bosses to jail and to protest arrests.

In 2019, cartel members angered by the arrest of notorious drug kingpin Joaquin “El Chapo” Guzman’s son launched an enormous assault in the northwestern city of Culiacan, prompting security forces to release him.

In March, gunmen clashed with security forces in the northeastern city of Nuevo Laredo after the capture of an alleged drug lord, who was quickly handed over to the United States.